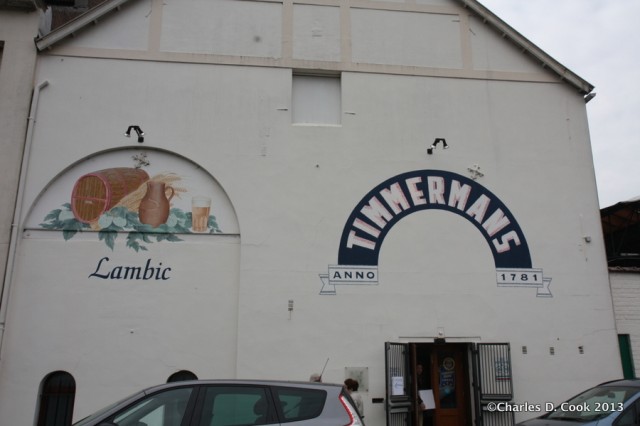 I was able to taste lambic and kriekenlambic from half a dozen different barrels during my December visit, and I was very impressed by the taste and quality of all of them. 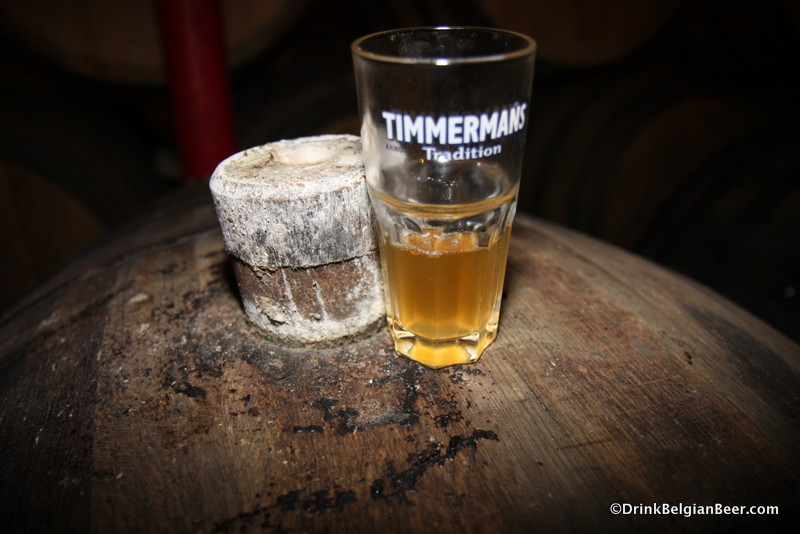 A glass of lambic taken from a barrel at Timmermans.

I returned on April 21st, 2013, for another visit during Toer de Geuze, an open house held every two years at most of Belgium’s lambic breweries and blenderies. Timmermans was in full swing, and packed with happy, beer loving visitors. Van Herreweghen was explaining the lambic brewing process to attendees in one of the barrel rooms in the brewery. He even had a microscope to show people brettanomyces yeasts under magnification, as well as a slide show about the brewery. 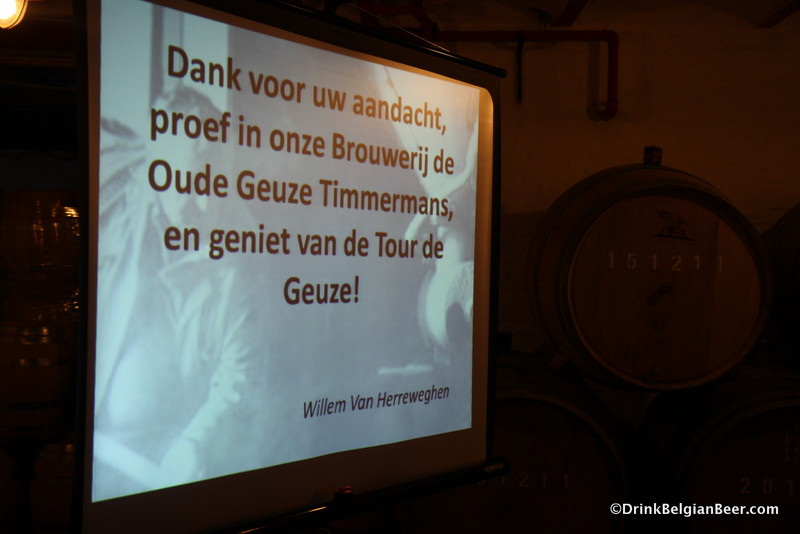 “Thank you for your attention, taste in our brewery Timmermans Oude Geuze, and enjoy Tour de Geuze!”

I applaud Brouwerij Timmermans for embarking on such a worthwhile mission of dedication and promotion of the survival of lambic brews, and I think beer lovers will soon agree.

During my April visit, CEO Anthony Martin told me: “We have added several foeders so far, and three of these barrels are over 100 years old, and have been fully restored. By the end of 2014, the rest will go in. We are very excited about this project. In fact, I am very happy right now with the lambics we have that are 18 to 36 months old. What we did in bringing back the old brewing process was to lose the acidity of our beers. We want tartness and balance, but not too much acidity. 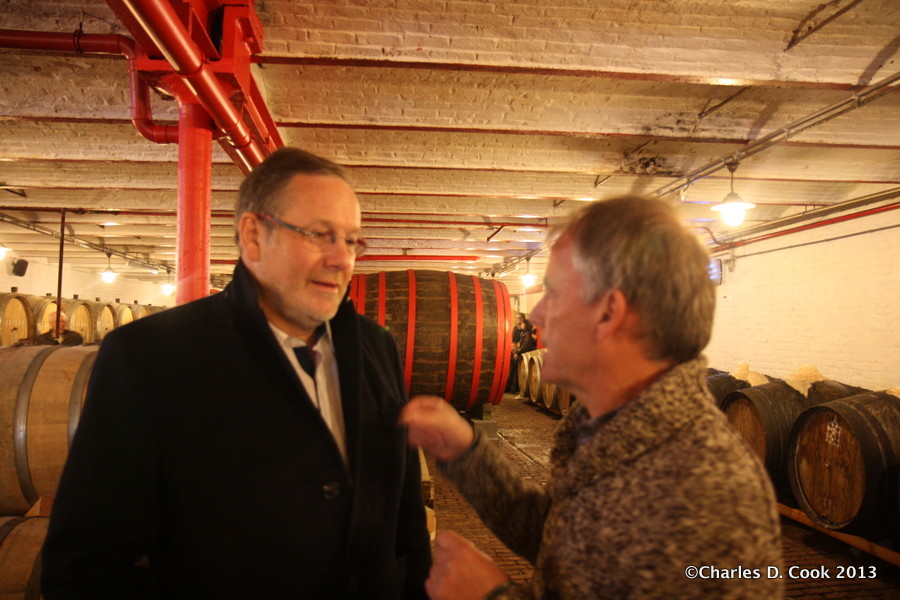 And Willem has been the driving force behind much of that success. He is very enthusiastic to come to work everyday and do something that he loves to do.”

Martin added: “In truth, we cannot meet the demand that there already is for our beers in the U.S.A. and other countries, so expansion is necessary. We need more lambic to make Oude Geuze and Oude Kriek, as well as for our Bourgogne de Flandres and other brews.” 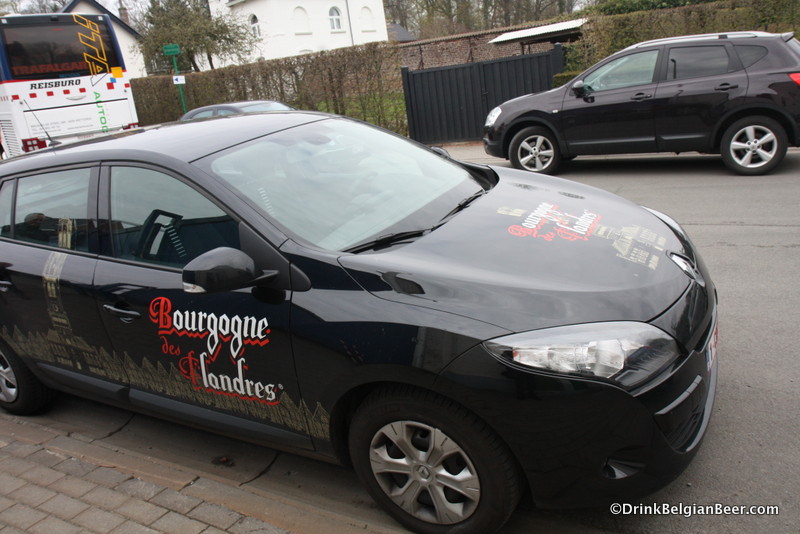 Martin, grandson of John Martin, bought out his brothers in 2004, and owns Anthony Martin S.A. The company owns the Gordon beers, as well as a number of other brands, and Timmermans.  “I am the only owner at the moment, but my sons will join me in the business in three or four years,” Martin remarked as we spoke.

“The money I have invested in this brewery is all about the love of tradition. It’s very expensive to run, renovate and upgrade a lambic brewery. Luckily, our other brands sell on a mass market, so that helps finance the investments here at Timmermans. I think we would max out here at 30,000 hl a year, and hopefully Oude Geuze and Oude Kriek will be a significant part of that in the future, if we can sell enough.” 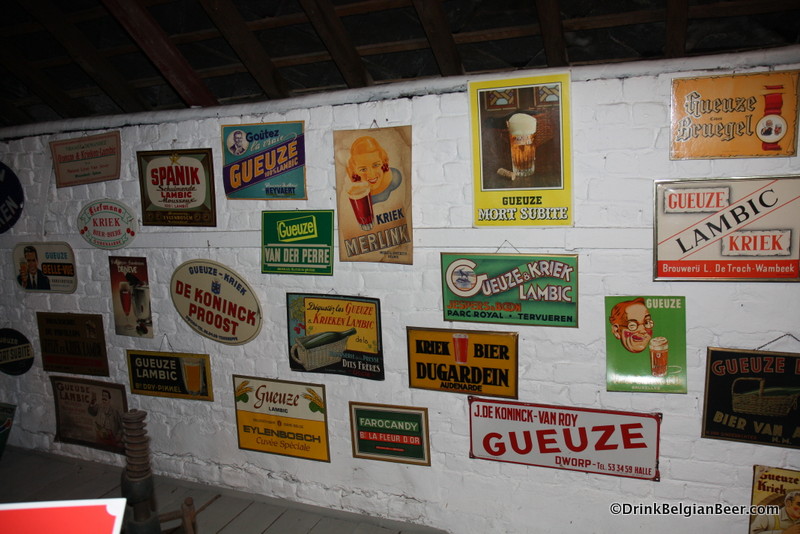 Brouwerij Timmermans is a very historic and beautiful brewery, filled with old breweriana. Colorful enamel advertising plates from now gone lambic breweries decorate the walls of its old museum, and there is much brewing equipment from bygone days in evidence, such as a baudelot heat exchanger. Crates of old bottles are common, as are ancient bottle fillers. Old horse-drawn beer delivery wagons remind visitors of the days before automobiles. 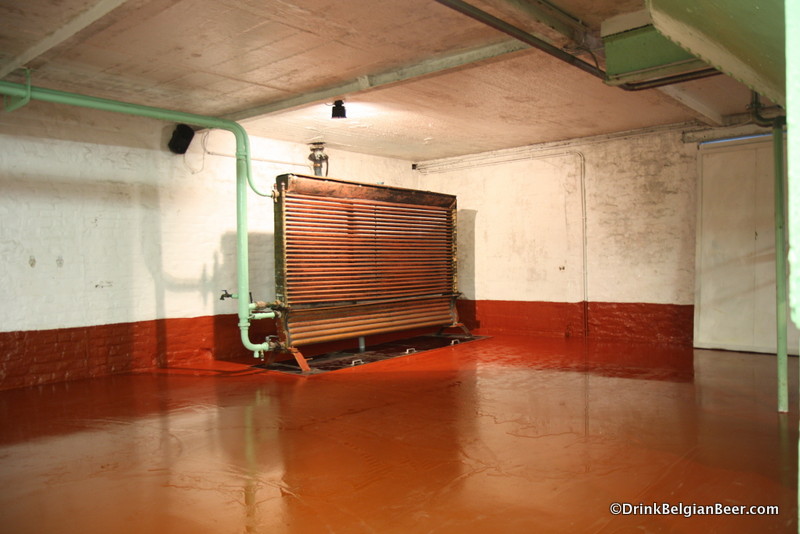 An old baudelot heat exchanger, no longer in use.