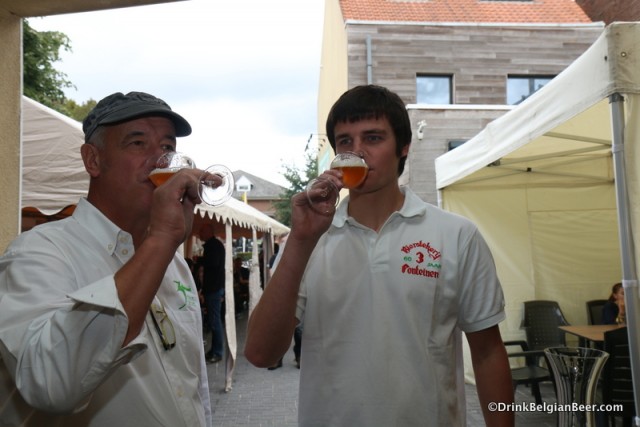 For the lovers of lambic, the spontaneously fermented beer produced mainly in the regions of the Payottenland and Zenne Valley, in and around the Belgian capital of Brussels, there is great news. The much-beloved lambic brewery, 3 Fonteinen (“Three Fountains”) recently purchased a warehouse in the city of Lot, which is already being transformed into a new, second 3 Fonteinen site. The 3 Fonteinen experience center for lambic beer will be the new barrel-aging, blending, and bottling facility of the brewery, and will also have a tasting cafe, a shop, and several conference/meeting rooms. There are also plans to add a small coolship to the site.

The idea is to provide visitors the opportunity to see the entire experience of what they do at 3 Fonteinen in one place, what you might call an immersive experience. The brewery aims to show what the art, the craft, and the traditions of lambic beer brewing, blending, and bottling are all about, with a focus on how things are done at 3 Fonteinen. Visitors will be able to tour the facility-with a 3 Fonteinen beer in hand-and see the 3 Fonteinen team at work. The facility will be set up so that visitors and the working areas are separated by glass. 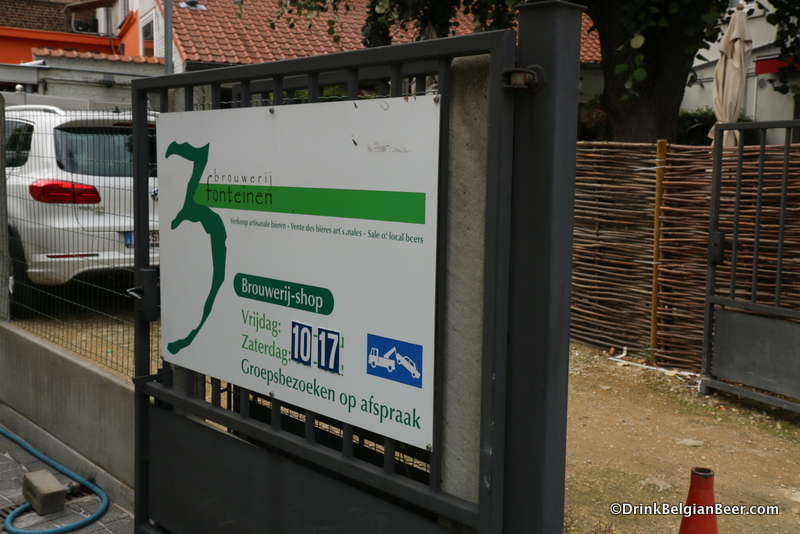 The brewery will remain at the current site in Beersel, due to the microclimate within the brewery building. I first learned of the project during a visit to 3 Fonteinen’s “Open Door Days” in early September, when I spoke with Armand Debelder and others in the 3 Fonteinen brewery family. 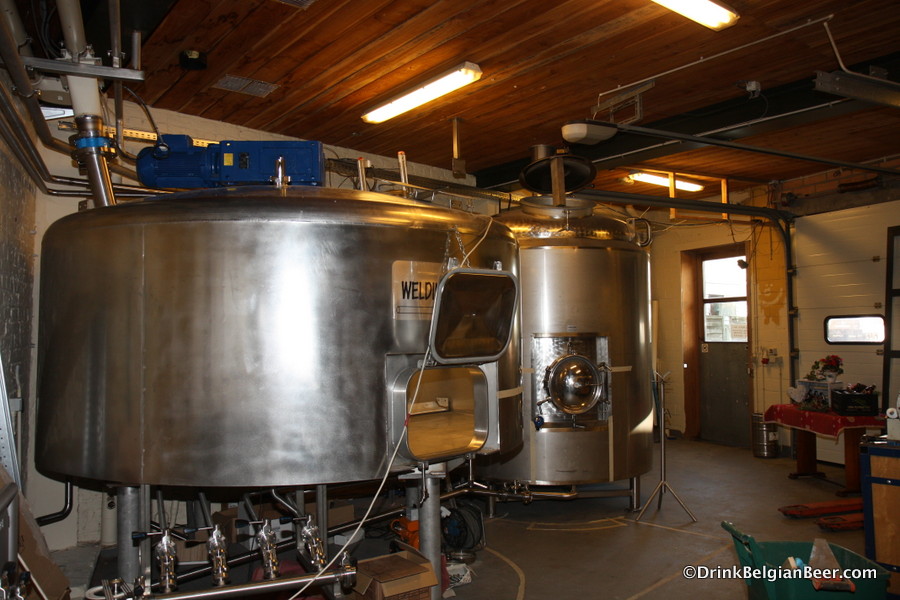 The new brewery at 3 Fonteinen, dating to 2012. For more info, see here 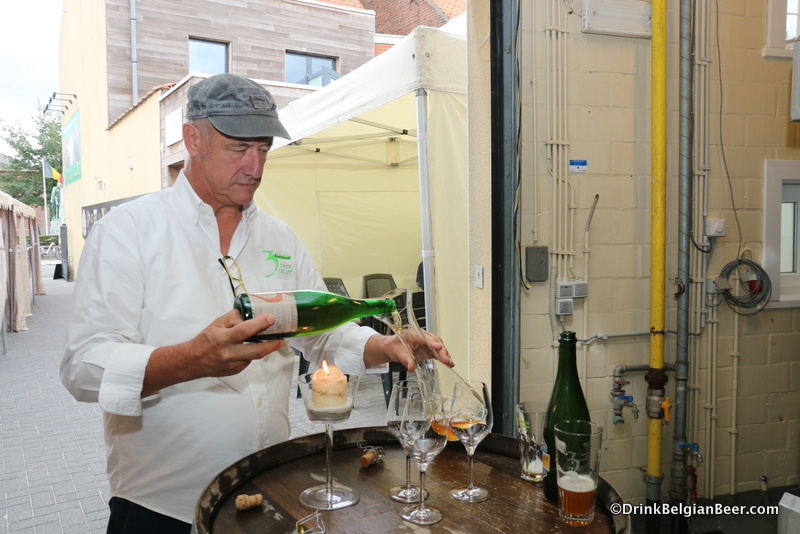 “We will have special bottlings of 3 Fonteinen beers that you can only drink at the cafe,” Debelder, 64, current co-manager and co-owner of the brewery, told me in September, as we sipped glasses of the excellent Zenne y Frontera, a lambic aged in Oloroso and Pedro Ximénez sherry barrels. “We will open the corks of special bottles before selling to customers in the cafe, so you won’t be able to carry any of these away. Of course, our shop will have beers such as our 3 Fonteinen Oude Geuze and others for take away, as well as many other products,” Debelder added. 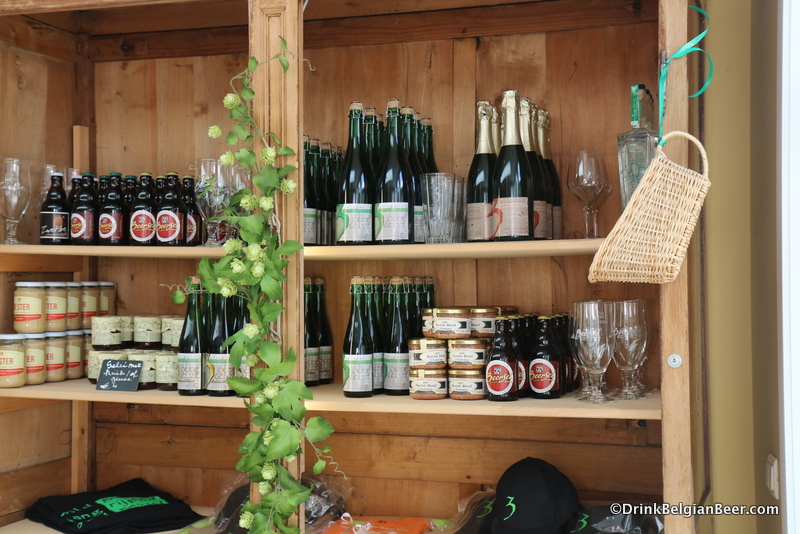 Some of the beers and other products available at 3 Fonteinen’s shop in September 2015. 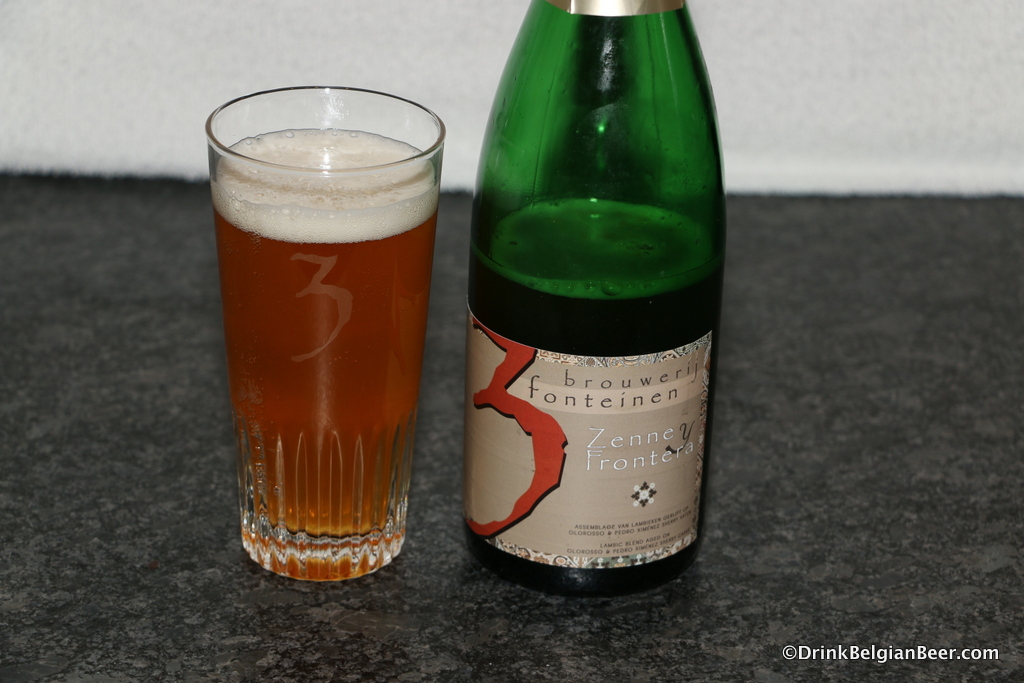 Beers such as the aforementioned Zenne y Frontera are examples of rarities that will be offered at The experience center in Lot. Another lambic brewer, Brasserie Cantillon in Brussels, has been very successful at offering small batch, brewery-exclusive lambic beers in the same way at their brewery museum in Brussels, which draws large numbers of beer tourists to drink these brews on site-and to take home other beers and Cantillon products. It’s smart marketing, as it creates an experience you can’t have anywhere else. 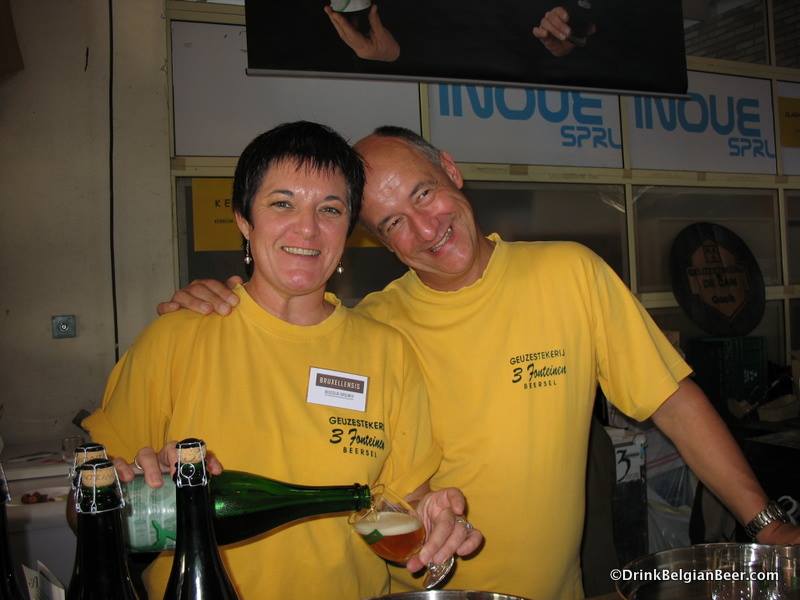 Lydie Hulpiau and Armand Debelder of 3 Fonteinen at a beer festival in Brussels.

Armand Debelder’s wife, Lydia Hulpiau, is a marketing expert who has helped 3 Fonteinen survive and thrive after a broken thermostat ruined almost a year’s worth of lambic production in 2009. Werner van Obberghen now handles much of the sales and marketing, and is a partner in the brewery. 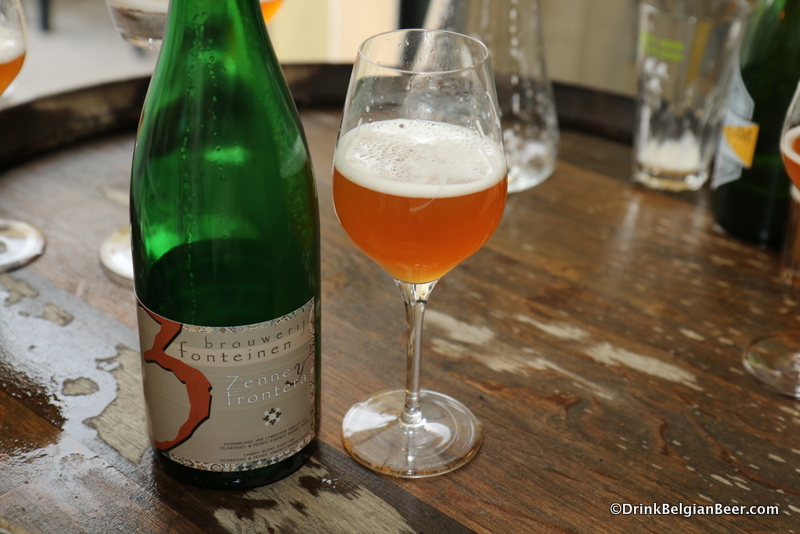 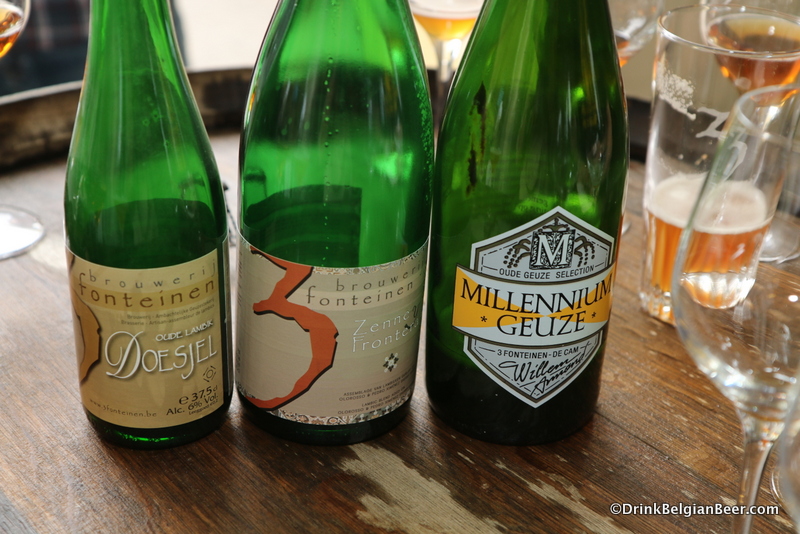 September 6, 2015, was a good day for enjoying great lambic beers in Belgium. For more about 3 Fonteinen/De Cam Millennium Geuze, see this article as well as this piece

The city of Lot is a fine choice for the experience center, as it is accessible by train and direct buses from Brussels, seven days a week. “When you come here by train to the warehouse, you have to walk across the bridge over the Zenne river, which is at the heart of lambic country,” Debelder remarked. “The experience center will be located in a warehouse not far from the Zenne,” he added. The location of the site in Lot, near the river and canal, will make it very bicyclist-friendly, something 3 Fonteinen and the Flemish tourism offices hope will add to the allure of the site. It will be possible to visit the new site and also take a tour around many other places located off the same Zenne canal, which include Brasserie Cantillon and Brouwerij Boon. There are also many other nearby places, such as the lambic blenders Hanssens, Tilquin, Oud Beersel, and De Cam, and there are many cafes serving lambic beer are in these areas as well.

3 Fonteinen would also like to promote local produce and serve “real” products for people to sample with their traditional lambic beer at their tasting cafe on site. 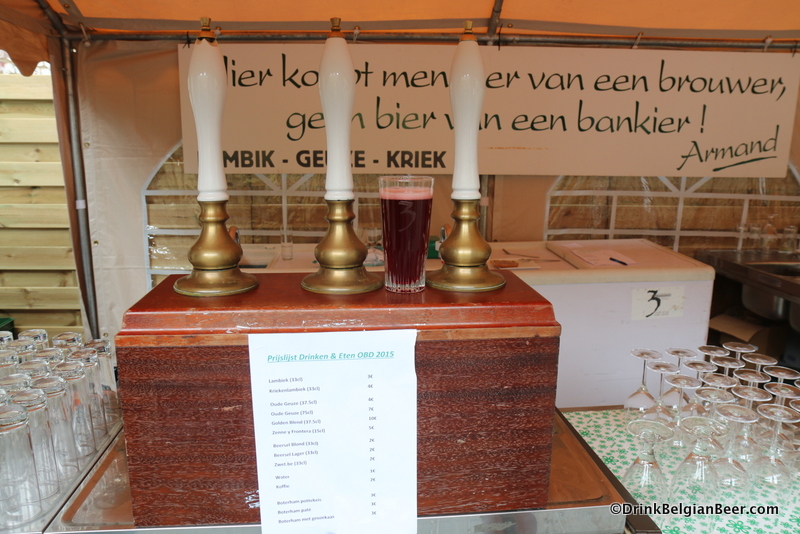 It is less than a 20-minute train ride from Brussels to Lot. Beersel is not far away, just 2 miles or so.

The barrel room will be the centerpiece of the new site, and take up almost half the space there. “People will be able to see us at work blending and bottling, on the other side of the glass. We will have much more space than we do here in Beersel, so there will be room for many visitors,” Debelder commented. 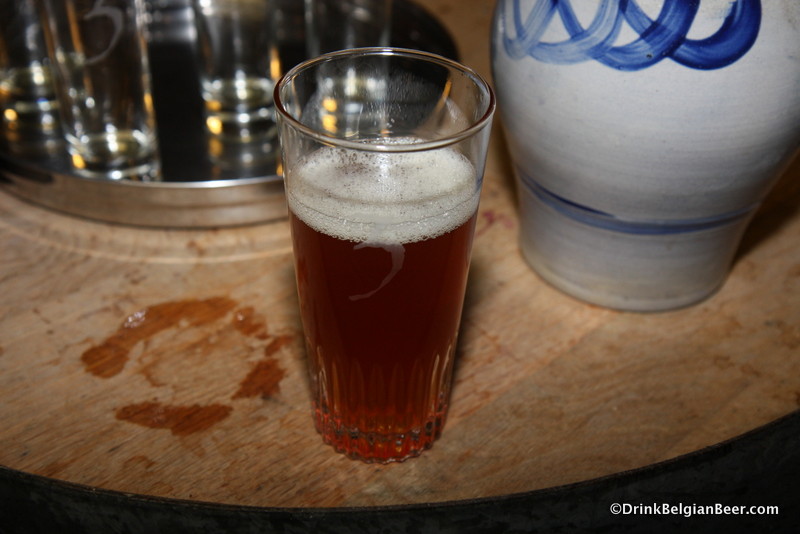 Photo: a glass of lambic from the new brewery, with just a few months in a barrel.

I have also been told recently that the average throughput of 3 Fonteinen lambic is about two years, as they typically age lambics for one, two, and three years, as is done at most of the other lambic producers. In the last few years, the average age of lambic on barrel is even longer, as the brewery has been preparing for its upcoming growth. 3 Fonteinen will produce about 1,000 hectoliters of bottled beer during this year’s production, which may be a bit below normal. They have 3,500 hectoliters of lambic currently in stock. 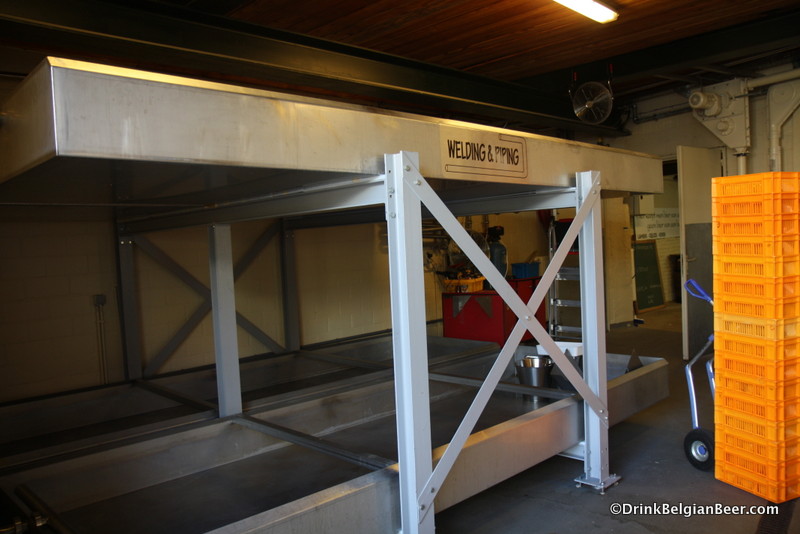 The double decker coolship at 3 Fonteinen.

A small coolship will be added soon, to assess how the wort reacts to the local microclimate, and to see how spontaneous fermentation will evolve in the new facility. It’s possible the current brewery could be moved to the new site after several years, if the microclimate is deemed to be suitable for brewing there. 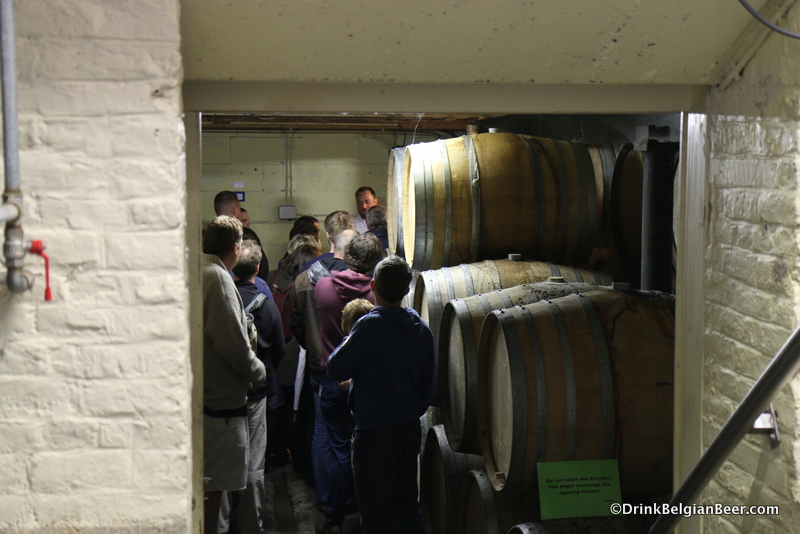 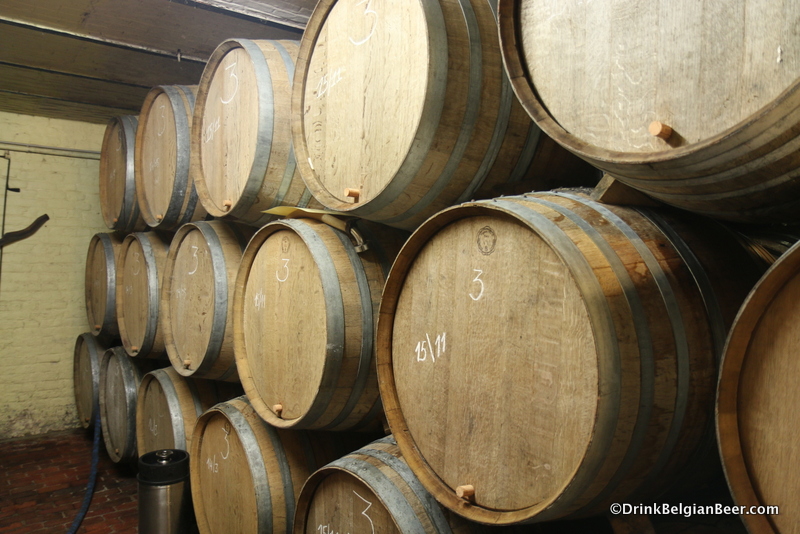 Barrels full of lambic at 3 Fonteinen.

The warehouse/soon to be experience center in Lot is fairly large, and will allow Armand, along with partners Michael Blancquaert and Werner van Obberghen, to consolidate all of their barrel-aging and bottling operations to one site, which will save time and money. “We currently have three warehouses, plus the brewery here in Beersel, for all of our barrel-aging, blending, and bottling, so moving everything to one place will be vastly more convenient and efficient,” Blancquaert commented. It will take about four to five years to make the move complete, as the brewery will not move any barrels until they have been emptied of lambic. 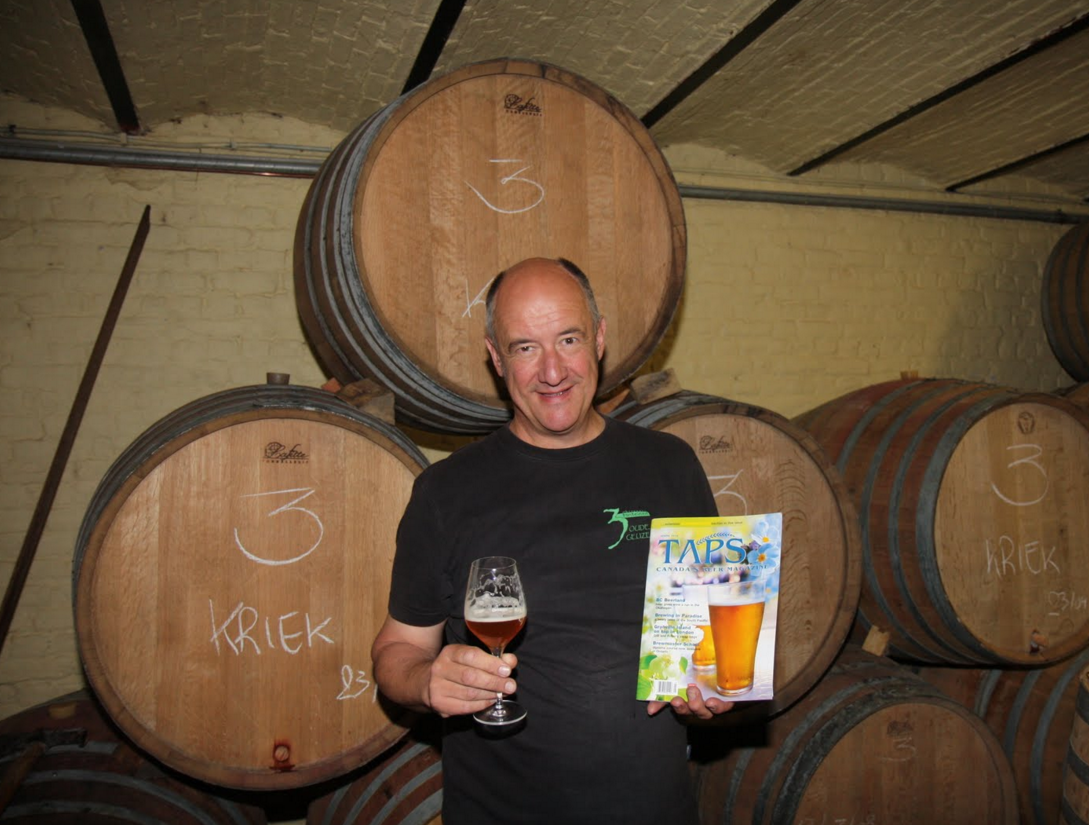 Armand Debelder with a glass of lambic and barrels filled with kriek behind him.

An important part of the project will be to expand the experience beyond the walls of the brewery, and there are plans to plant an orchard of Schaarbeek cherry trees, to grow Schaarbeekse Krieken (the Schaarbeek cherry variety) which are the fruits of the now rare cherry trees local to the Schaarbeek area. Envision locals and international beer lovers alike picking the fruit during the annual harvest. Sounds like a great idea!

Additionally, the brewery has told to me that they would also like to be 100% ecological, which is another trait of “real” lambic. 3 Fonteinen does not use industrial products in their processes, not even enzymes. Except for filtering the drains out after brewing (while cleaning out the sediment of the mash tun) all the water that runs off is very pure, and they could easily completely purify it themselves. 3 Fonteinen is currently investigating other possibilities as well, such as solar panels, and more. 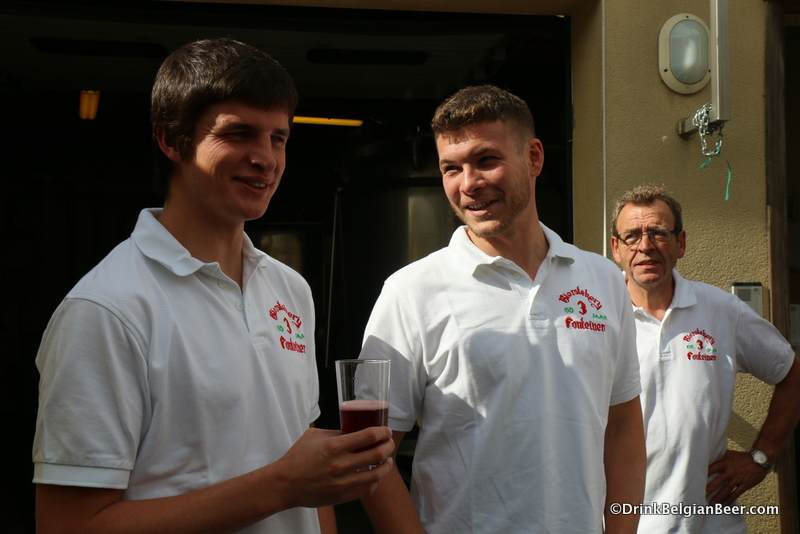 “All of the final documents for the site were signed about two weeks ago, for the warehouse and surrounding fields,” I was told recently by brewery representatives. “We are now fully organizing with the architects to start the structural works. In the meanwhile, we already have loads of barrels, and some foeders over there as well.” 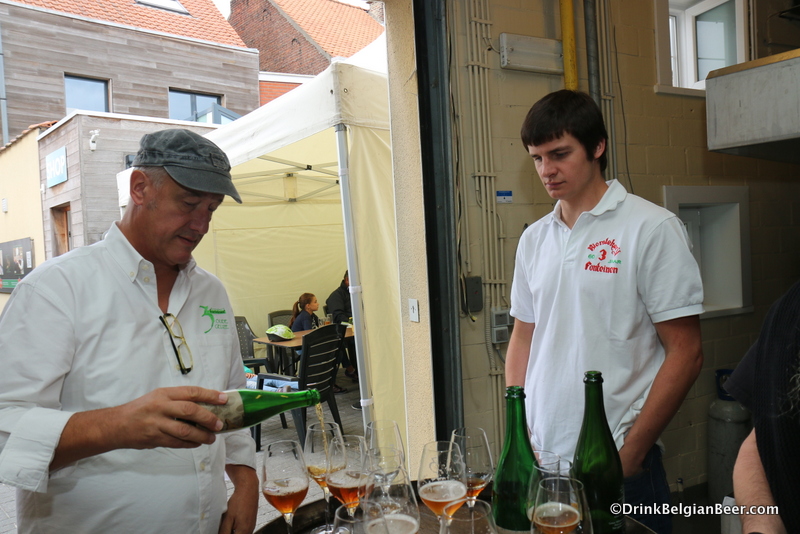 For the time being, all efforts are being put into opening the experience center to the public, hopefully by the end of 2016 or early 2017.

“We want to show people everything that is involved in the making of Geuze and Kriek,” Debelder told Kristof Verhasselt of De Lambikstoempers recently, in this article. De Lambikstoempers is one of the premier beer organizations/clubs helping to promote lambic beer in Belgium today. The group is based in Halle, to the south of Brussels. 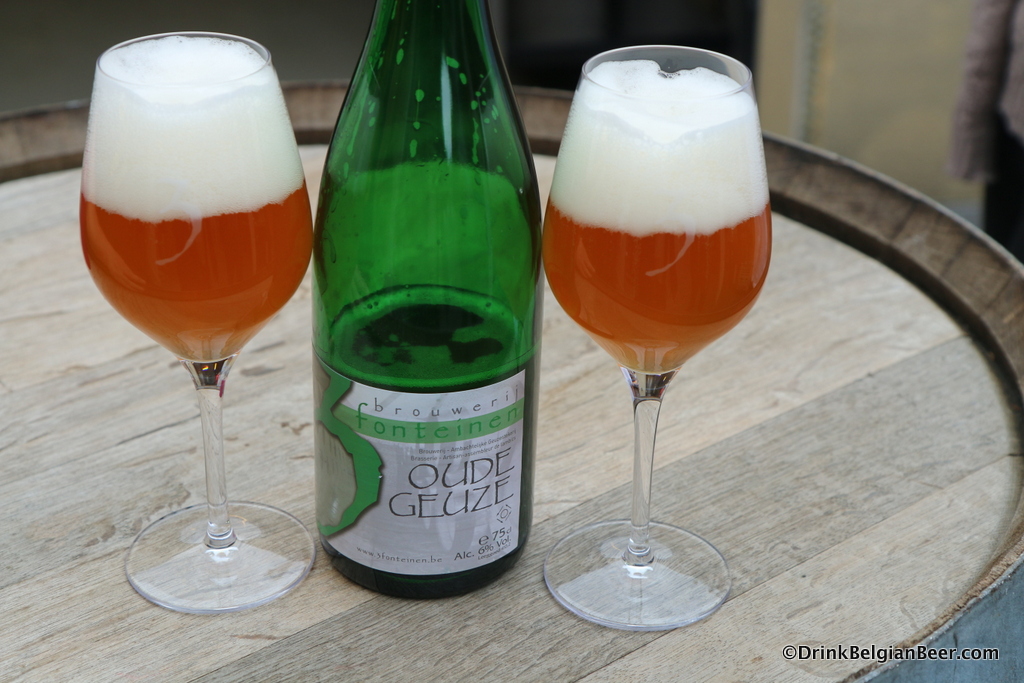 Verhasselt also reports that there will be regional cuisine served at the tasting cafe, from a modern kitchen. Other recent local articles include this piece.

Like “De Lambiek,” the lambic beer visitor’s center in nearby Alsemberg, the experience center will get some subsidies from the Flemish government. 3 Fonteinen has also made it clear that they do not intend to compete with De Lambiek. 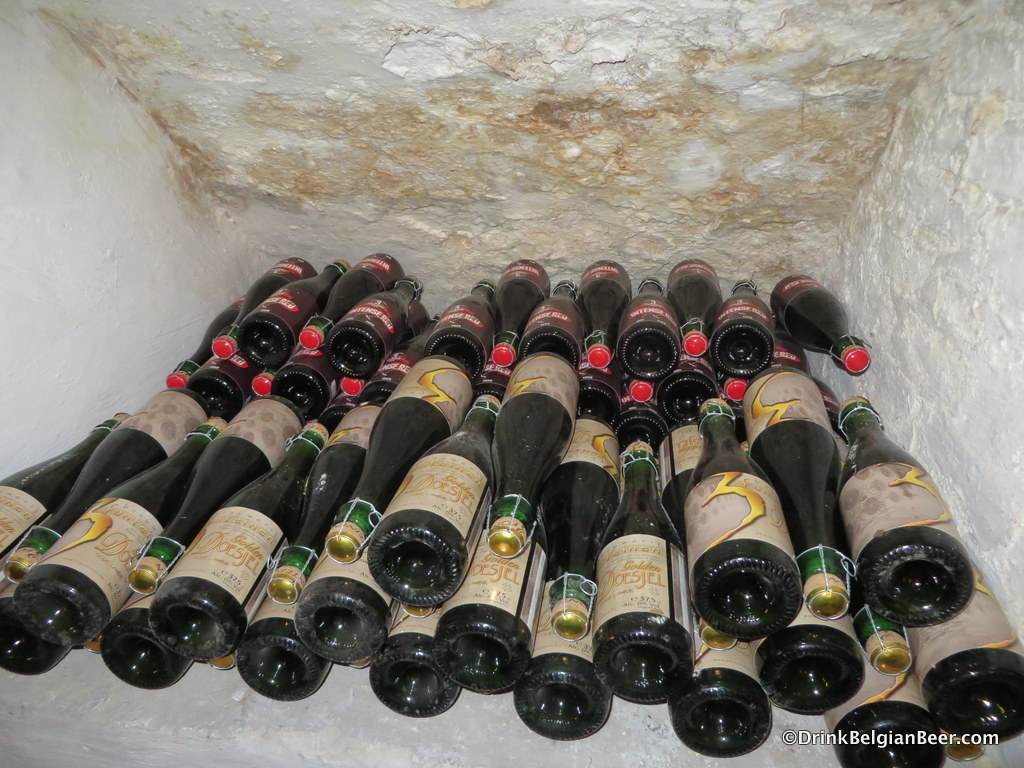 3 Fonteinen Intense Red and Golden Doesjel in the cellar of the great Cafe Rose Red, Brugge. See here for more info about the cafe

About all of the exciting future plans, Armand Debelder had this to say: “Who would have thought that this could have been possible, ten years ago? I’m so happy to work with these two young guys, Michael and Werner, who, through their knowledge and hard work, have made this possible. These are exciting times.”

No doubt, these are very exciting times for beer lovers! I look forward to visiting Lot whenever I am in Belgium, and I have the feeling the little city is going to become very well known for beer tourism in a few short years. Congrats to Armand, Lydie, Michael, Werner, and Bas for their recent success. May it continue for many decades to come.