De Lambikstoempers, the premier lambic beer appreciation and promotion club in Belgium’s Payottenland, is holding their eighth annual “Dag Van de Oude Geuze” or Day of the Old Geuze, next weekend. The venue is the Streekproductencentrum (Regional Products Center) in Halle, eight miles south of Brussels. Halle is linked by two to three trains an hour to Brussels, and the journey takes only about 20 minutes. You could base yourself in Brussels or even a hotel or B&B in Halle.

I was conducting beer research, aka visiting lambic cafes, in the Payottenland last Sunday, 10 November, with the President of De Lambikstoempers, Johan Wanne Madalijns, as well as Wim de Kelver, another member of the group. They are as passionate about lambic beers as anyone out there, so I highly recommend this event. 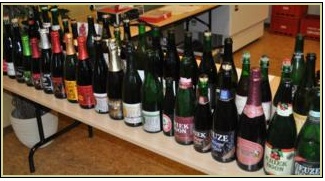 Bottles of Oude Geuze, Oude Kriek, and more at a previous event.

As the press release is available only in Dutch, I have attempted to translate, with a bit of help from a certain on-line service.

The eighth edition of our Day of the Old Geuze will take place on Saturday 23 and Sunday, November 24, 2013, in the upper room of the Regional Products Center (Streekproductencentrum) at Poststraat 3A, 1500 Halle .

Last year more than 500 interested people , including many foreigners , came to the Regional Products Center to (re) discover the diverse taste and flavors of Lambic beers!

Also this year we will provide a comprehensive sampling of beers produced by spontaneous fermentation.

We do this just to delight the many beer lovers of the real Lambic Beers.

Namely, those beers which are 100 % Lambic, are used to produce Oude GEUZE & Oude KRIEK, where the yeast cells that are found in the air of the Zenne valley help produce the Lambic. We are proud that we can offer these brews in their own region . The full range of the 12 remaining lambic breweries and tasting samplers will be offered.

This year, visitors get the chance to again taste a real lambic, the base brew of Geuze. We will offer three lambics, directly poured from the wooden barrels of the local lambic producers.

Besides Lambic, we also offer Geuze, Kriek , Faro, Framboise, and more.
Also, there will be a beer that does not belong in this style : our own Servaisbier, the result of the Servaisjaar brewed beer of top fermentation , a festival beer with an alcohol content of 6.5 % abv. Also, coffee and soft drinks will be available .

All beers will be served in tasting glasses of 15 cl (about 5 US fluid ounces) and cost only 1.50 euros each. So, it should be possible to taste several beers. The entrance to the Day of Geuze is free.

” FIRSTS & TASTERS ”
As in previous editions , you can taste some special beers and first time releases on the “Day of the Oude Geuze.” In an absolute first, you can taste a “tasting board ” from the Cantillon brewery in Brussels (Lambic , Faro, Fou Foune, Kriek and Framboise , Zwanze , and more.)

This taster board was specifically designed to enable the visitor to order 5 glasses simultaneously, and thus to undertake a fascinating taste experiment. Not only for the brewer, it will be an experiment for our visitors!

Using a now impressive list of pubs and a number of criteria (which are developed after many hours of discussion) and after anonymous visits to the proposed businesses, “The Lambikstoempers Association” will, on Sunday, November 24th, 2013 at 15:00, award for the fourth time, “Golden Lambikstoemper” prize. It will be awarded to, in their opinion, the business that in 2013 best paid extra attention to and promoted the “lambic beers.”

The Golden Lambikstoemper is an artful certificate with some poetry made by Leo Lintermans!

Presentation of the “Regional Products Center”

The Streekproductencentrum/Regional Products Center houses the most traditional and artisanal foods produced in the “Green Belt” (Note: this is a relatively new term for the products of the Payottenland and the Province of Flemish Brabant.) They have more than 200 different products in house, so there is something for everyone. Some of these products are made on site, sometimes according to old recipes.

The store will be open during the opening hours of the Day of the Geuze, so all visitors can buy things and take home to continue to enjoy the local products. Normally it is closed on Sundays.

The objectives of our association (and Zythos) are :
1. Retaining the Belgian beer culture ;
2. Organizing or encouraging projects that communicates the originality of our Belgian beers, and promotes their enjoyment ;
3. The denunciation of irregularities in relation to the consumer.
(Note: things that are bad for the beer-loving consumer, eg price hikes, higher beer taxes, less choice in beers and where to drink them, etc.)

The name ‘Lambikstoempers’ is not arbitrary, but refers to the rod that was formerly used to break the sugar that was often added to our regional beers, such as lambic and geuze . Although we pay a lot attention to our current beers, the name of our association is rather symbolic and historic. Connoisseurs, but especially those who love our national drink, from lager to kriek to Trappist to seasonal and Abbey beers, come into our association guaranteed to get their money’s worth. Based on tastings, themed evenings (cheese and beer pairing, etc.) brewery visits, excursions, and everything that is has to do with beer , we aim at a loose and comfortable, but very objective way, on how to educate on the various aspects of the beer.