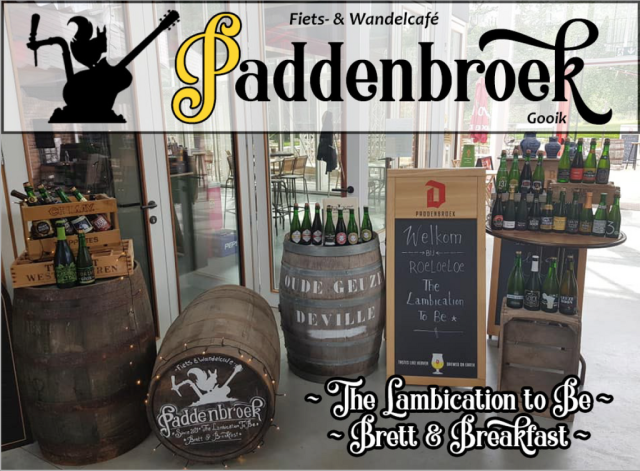 While the pandemic forced quite a few beer cafes in Belgium to close their doors, it was a bit kinder to Belgium’s lambic country and culture, which has continued to thrive. Lambic breweries and blenderies did not take a break during Covid, producing lots of new brews, with some excellent ones among them.

Following the continued strongly increasing trend in lambic’s popularity, it is no surprise that new lambic-focused cafes and restaurants would follow, especially in the very heart of the Payottenland, in Belgium’s lambic country. 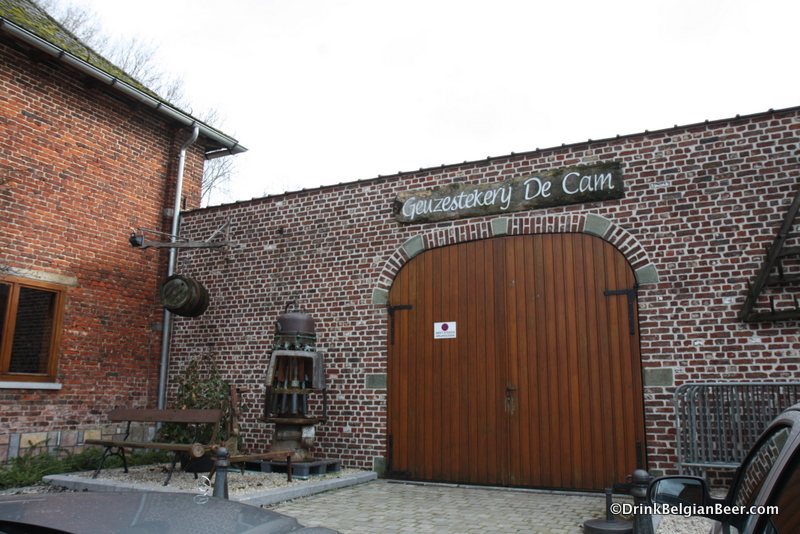 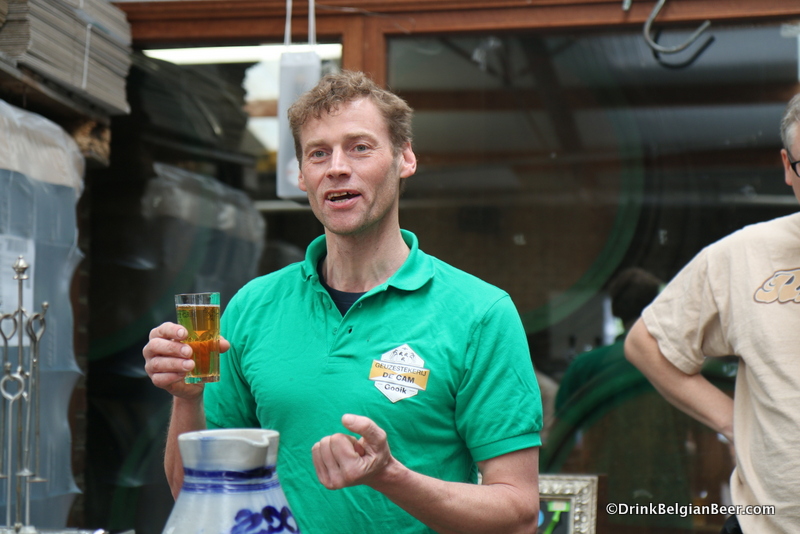 Perhaps the most impressive such new place is located just outside the village of Gooik, which is known among beer lovers for the much loved lambic blendery, De Oude Geuzestekerij De Cam.

Fiets en wandelcafé Paddenbroek, which translates as “Cycling and Walking Cafe Paddenbroek” is located just 1.3 km from De Cam and the center of Gooik. The cafe is situated in a big open field, adjacent to woods and streams: a classic Payottenland setting.

‘t Paddenbroek is ideally suited for groups or individuals. There is a large parking lot out front, and even enough parking-and electricity hookups-for several recreational vehicles. Yes, a beer focused cafe, accessible to RV’s…

Roel Janssens, Manager of ‘t Paddenbroek, had this to say: “This project is an initiative of the municipality of Gooik, and is owned by the town. The Paddenbroek building had already been renovated, and included a pub. The town of Gooik was looking for an independent operator, and I immediately seized on the chance to run it. I knew this location had a lot of potential.” 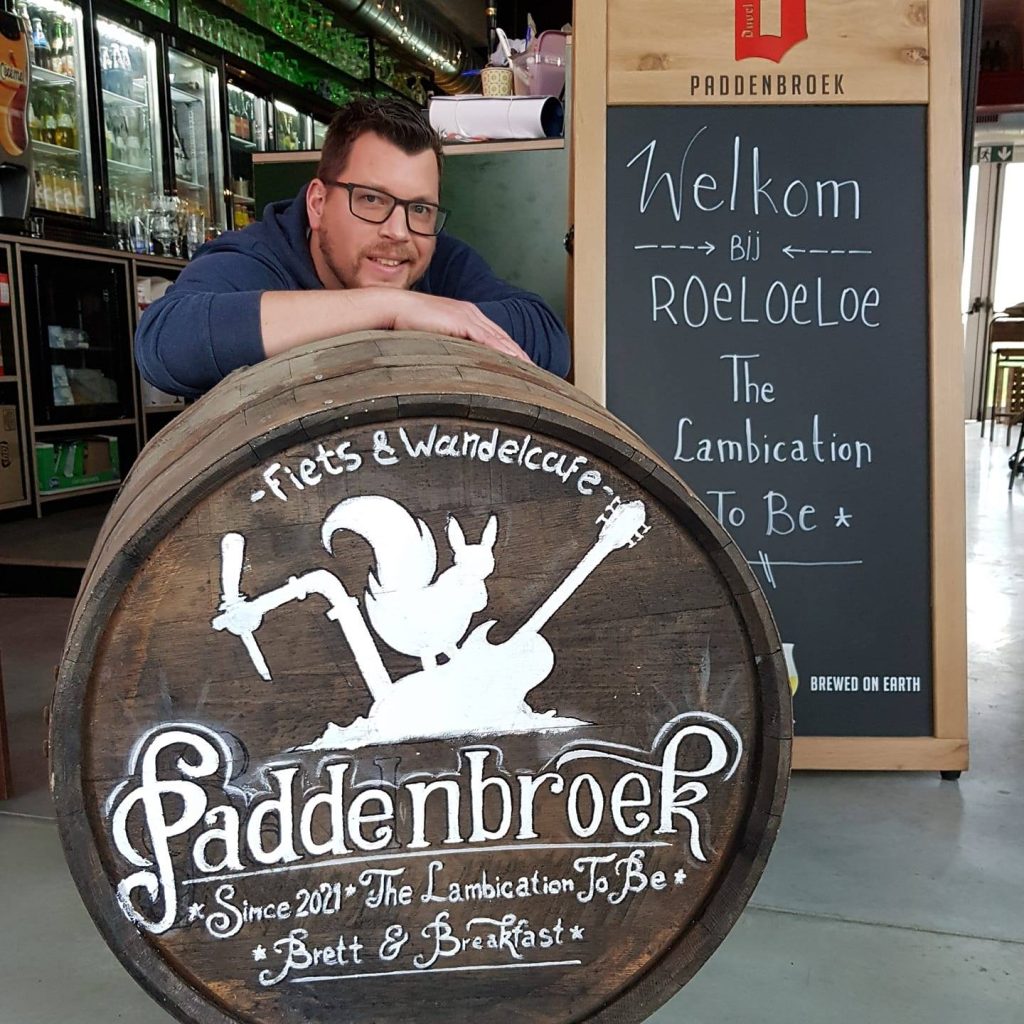 Roel Janssens, Manager of ‘t Paddenbroek, with a special barrel with the cafe’s logo on it.

As to why he wanted to become manager of the cafe, Roel had this to say: “I had been wanting to start my own business for some time. After working for quite a while at my uncle’s (Bart Devillé) pub ‘Den Herberg’ where they serve the lambic and other beer styles brewed in the back of the pub, at Brouwerij Den Herberg, I was looking for an opportunity to run my own cafe, specializing with specialty beers and great local food.”

About his background and how he had the specialty beer and HORECA (That’s Belgian for hotels, restaurants, and cafes) experience to became manager, Roel had this to say: “I was already very familiar with the world of beer. I used to work at a specialty beer and liquor retail shop, and I was able to specialize in, and learn about, special beers in that job. Afterwards, I also worked in the Lindemans brewery, where I used to help brew all the beers. Later, I worked as a sales representative at both the St. Feuillien and Caulier breweries. I have been working in the world of specialty beers for over twenty years.”

Fiets en wandelcafé ‘t Paddenbroek opened in late November 2020, when Belgium was still mostly locked down during the pandemic. “At first, we started with just drinks and other items for takeaway, such as hot chocolate, milk, soup, coffee, and tea, but no alcoholic drinks. Later, in May 2021, bars and restaurants were allowed to reopen in Belgium. That’s when my bar began serving lambic and other beers.” That was a good day… 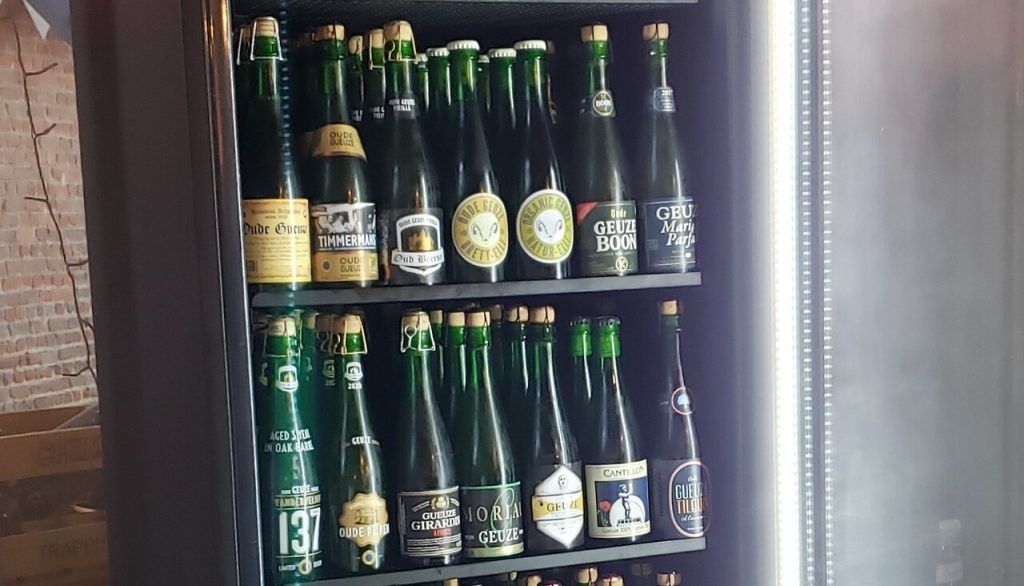 Some of the many lambic and geuze beers on offer at ‘t Paddenbroek cafe in Gooik, Belgium.

Speaking of beer, Roel had this to say: “We try to stock as many lambic beers as possible, but also offer a good range of regional beers, Trappist ales, and other brews. While we focus on lambic, we have a wide variety of drinks on offer. In fact, our goal is to have about 130 bottled beers, and seven brews on tap.” 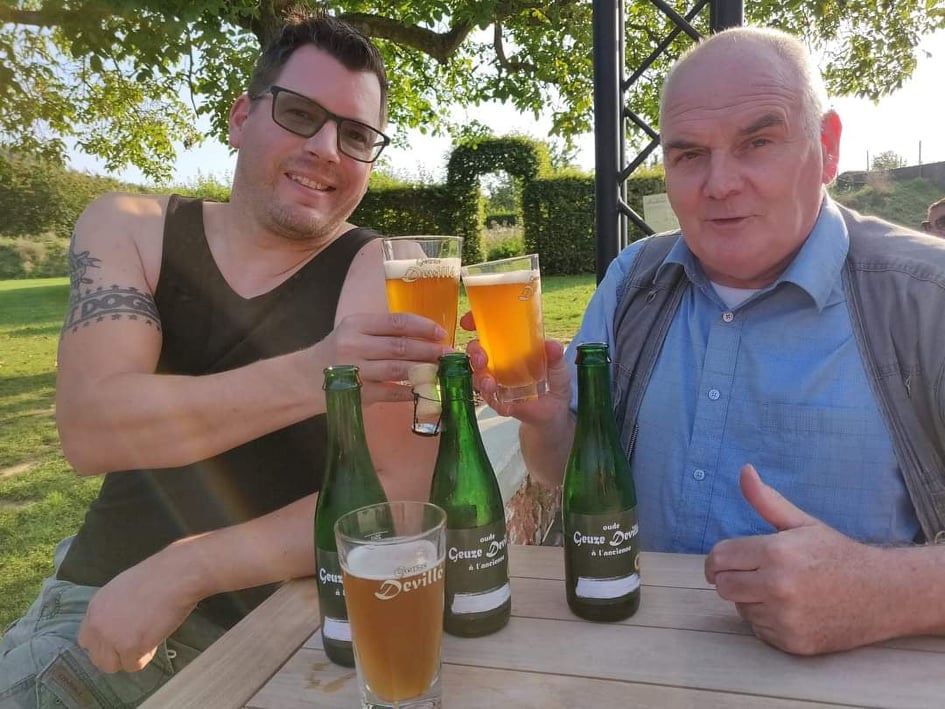 I visited with a group of nine people on 18 September, and I’m pretty sure that between the already printed menu, and the large numbers of bottles not yet added to it, the total number would already be at 100+ brews on offer.

As to the size of the cafe, Roel commented: “We can welcome around 70 people inside and around 130 outside. Also, even though our pub is the perfect place to enjoy some sunshine outside, apparently people are also finding their way to us on bad weather days, which we are very happy about!” 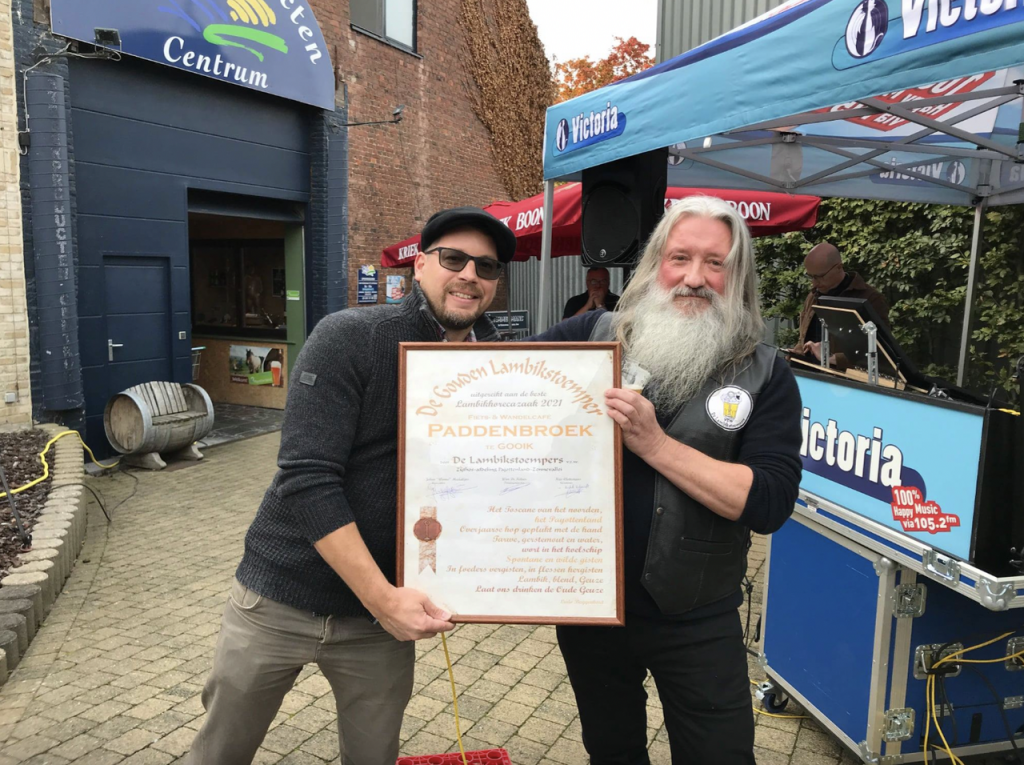 The criteria used to choose the winner for the award are described by De Lambikstoempers as follows: “Based on an impressive list of catering businesses, a number of criteria (which were drawn up after many hours of discussions) and after an anonymous site visit to all the proposed businesses, we – De Lambikstoempers vzw – presented our Golden Lambikstoemper Award for the 12th time on Sunday 17th of October 2021 to the business that, in our view, has paid the most attention to lambic beers in 2021.” 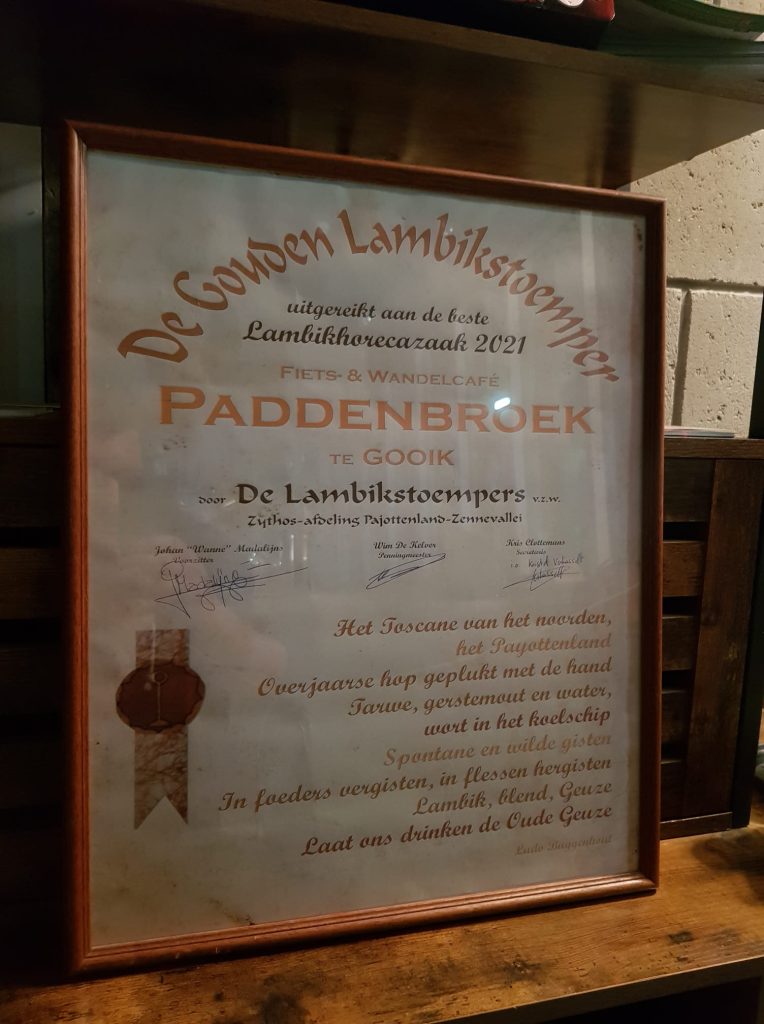 They continued: “And the winner this year was café Paddenbroek (Paddenbroekstraat 12, Gooik), because of the very nice selection of spontaneous fermentation beers on the menu: various lambics, about twenty Old Gueuzes and ten Old Krieks. But manager Roel “Roeloeloe” Janssens also has the necessary knowledge and makes no secret of the fact that he is a fan of lambic and Old Gueuze. In addition, Paddenbroek is located in a beautiful location, with a terrace and garden. In short: a deserved winner of our Golden Lambikstoemper Award 2021!”

For more info about De Lambikstoempers, also see this previous article, as well as this one. 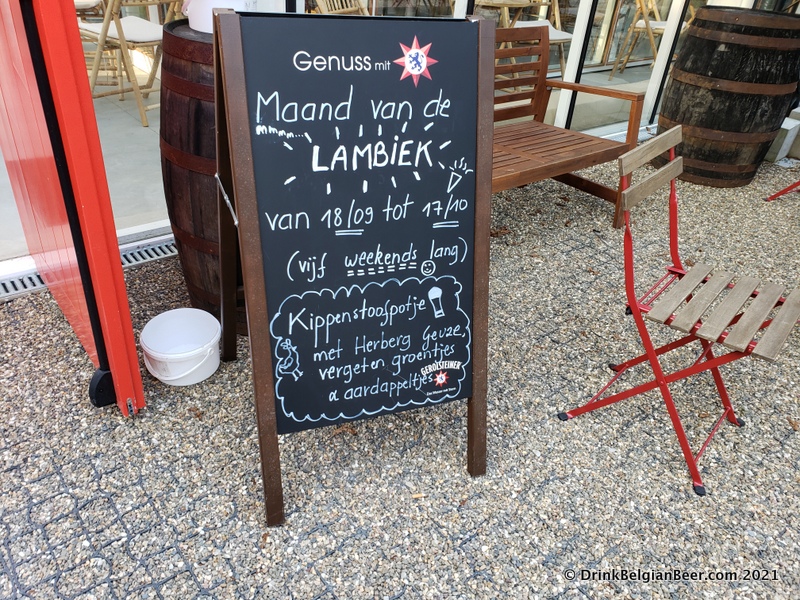 This blackboard at ‘t Paddenbroek reads “Month of Lambic from September 18 through October 17th, five weekends long.” It says the special of the day is a pot of chicken stew made with Oude Geuze from Brouwerij Den Herberg, with various greens and boiled potatoes. The stew, and the Den Herberg lambic, were delicious! 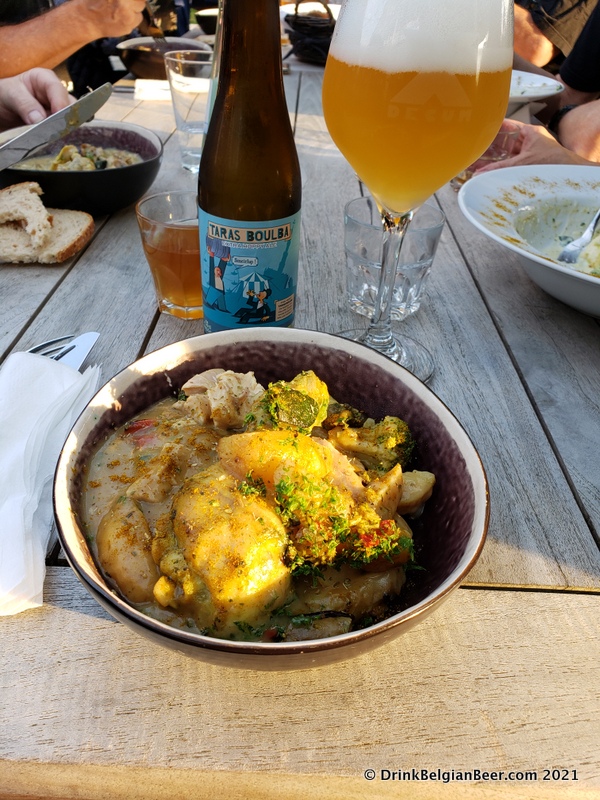 My group visited Paddenbroek on a beautiful Saturday afternoon and evening. We were greeted by Roel, and were seated at a large table outside. He suggested everyone taste Brouwerij Den Herberg’s excellent lambic from a bag-in-box, which is a common method of storing and serving straight (unblended) lambic beers.

We then enjoyed excellent meals while pairing with some of our favorite beers. Note that ‘t Paddenbrook is what the Belgians call an “eetcafe” meaning that you can just go to drink there, but you can also eat there. In comparison, when you go to a restaurant in Belgium, it is expected that you will eat. Roel remarked: “My brother, Rein Janssens, is a gourmet chef, who is trained at cooking with beer, and pairing beer with food. More info about him, and our menu, is here.”

‘t Paddenbroek’s opening days and hours were as follows at the time of publication: Tuesday through Saturday, from 11 am to midnight; Sundays from 10 am to 10 pm; and closed on Mondays.

IMPORTANT NOTE: ‘t Paddenbroek, like many other cafes and business in Belgium, is CASH ONLY (eg, euros.) There is no ATM on site, so be sure and hit a cash machine and stock up on those euros before you visit.

‘t Paddenbroek is certain to become one of Belgium’s premier lambic specialty cafes. I highly recommend a visit! 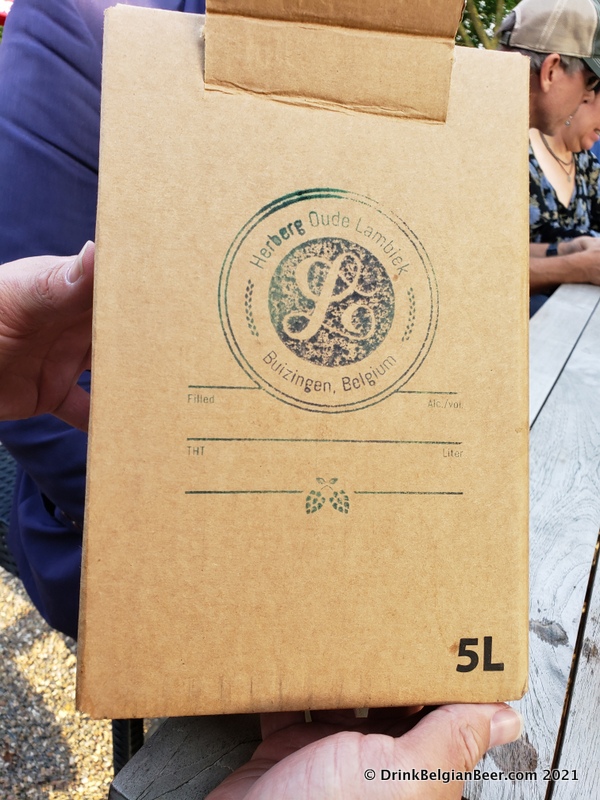 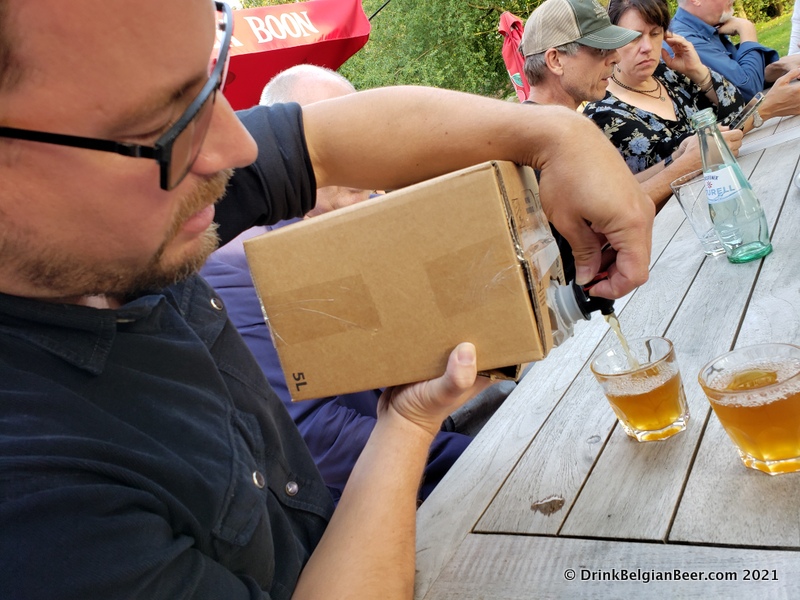 Roel Janssens, manager of ‘t Paddenbroek, pouring a glass of Den Herberg lambic from a 5-liter bag in box. 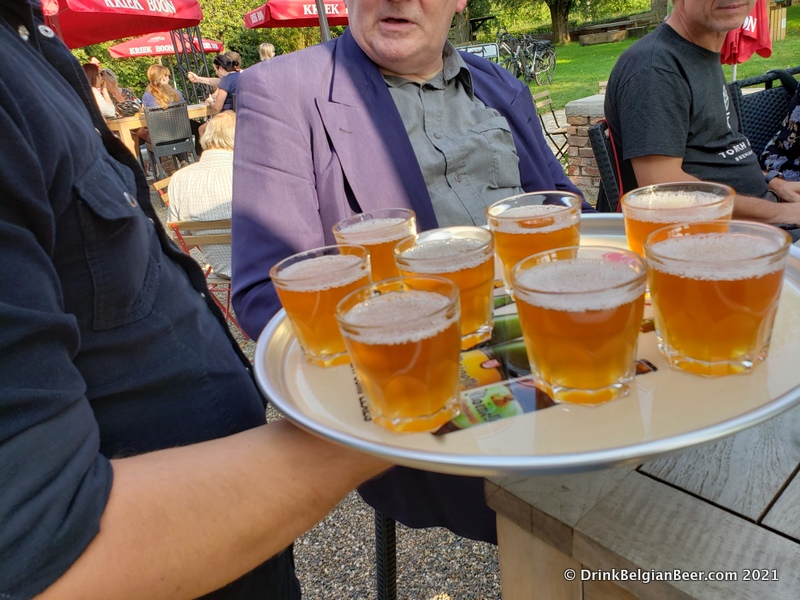 A round of glasses of lambic from Brouwerij Den Herberg, served from a 5-liter bag in box.