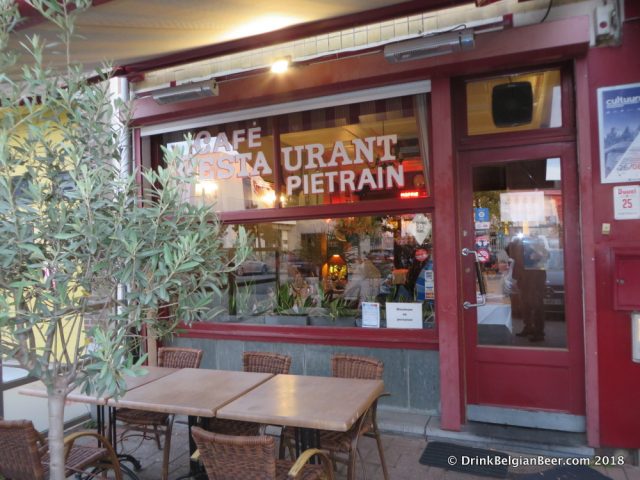 One of the main reasons I visit Belgium is for its great variety of classic beers. Food is the next biggest factor: the Belgians know how to eat well, and pairing great brews with fantastic meals is something they do superbly well. 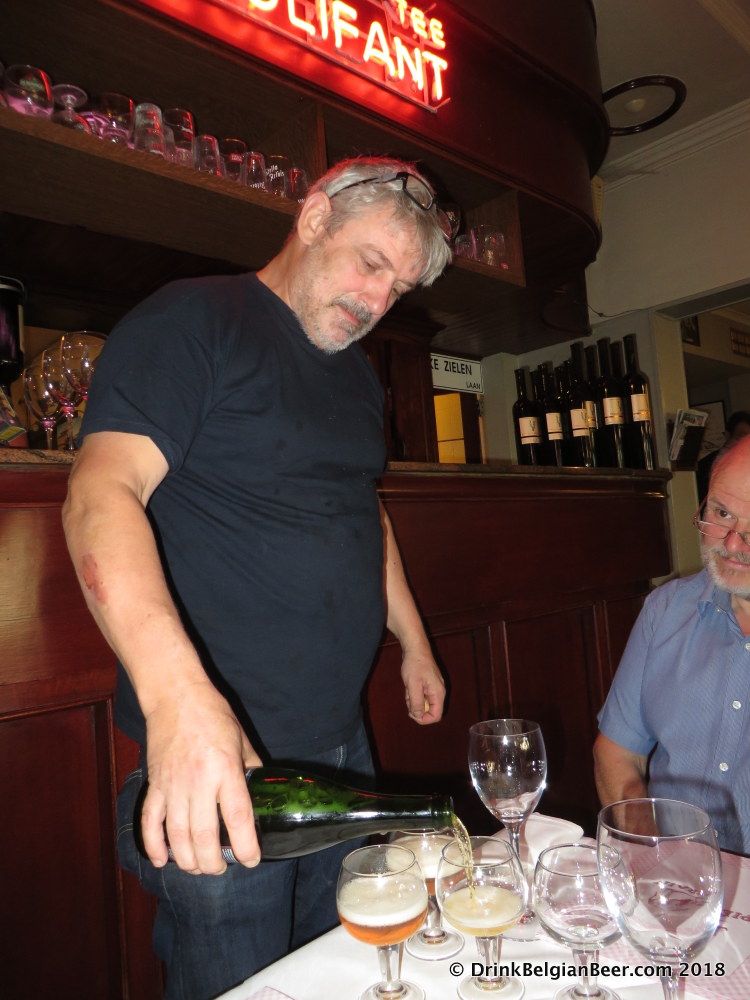 While I have written about a number of great Belgian restaurants with world class beer menus and wonderful food in these pages, one place that I have not yet covered is Cafe/Restaurant Piétrain in Antwerp, located in the city’s old meat packing district. The area is northeast of Antwerp’s beautiful Centraal Station, and is also known as the Dam district. Chef and owner Marc Winant is no stranger to the beer and food scene, as he was previously the chef and grillmaster at De Stroepop in Zoersel, outside Antwerp, as well as De Torenhoeve in Rotselaar. Winant, wanting to have a restaurant of his own, opened Piétrain in 2014. 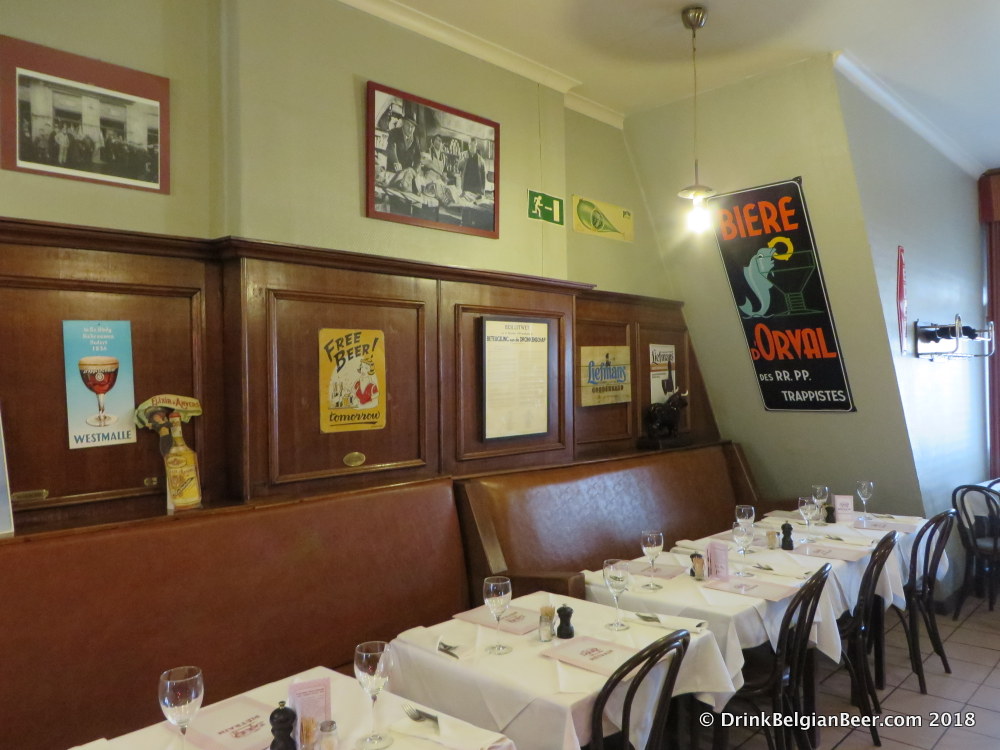 One room inside Cafe/Restaurant Piétrain in Antwerp.

Marc Winant is a real beer lover, and it shows in the beer menu at Piétrain. There are over 100 different beers, with a wide variety of lambic beers, Trappist brews, as well as regional and specialty beers, on offer. The restaurant is decorated with breweriana throughout, with many old signs.

Piétrain, while known for grilled meats, has a wide selection of menu items. You can read the full menu here. 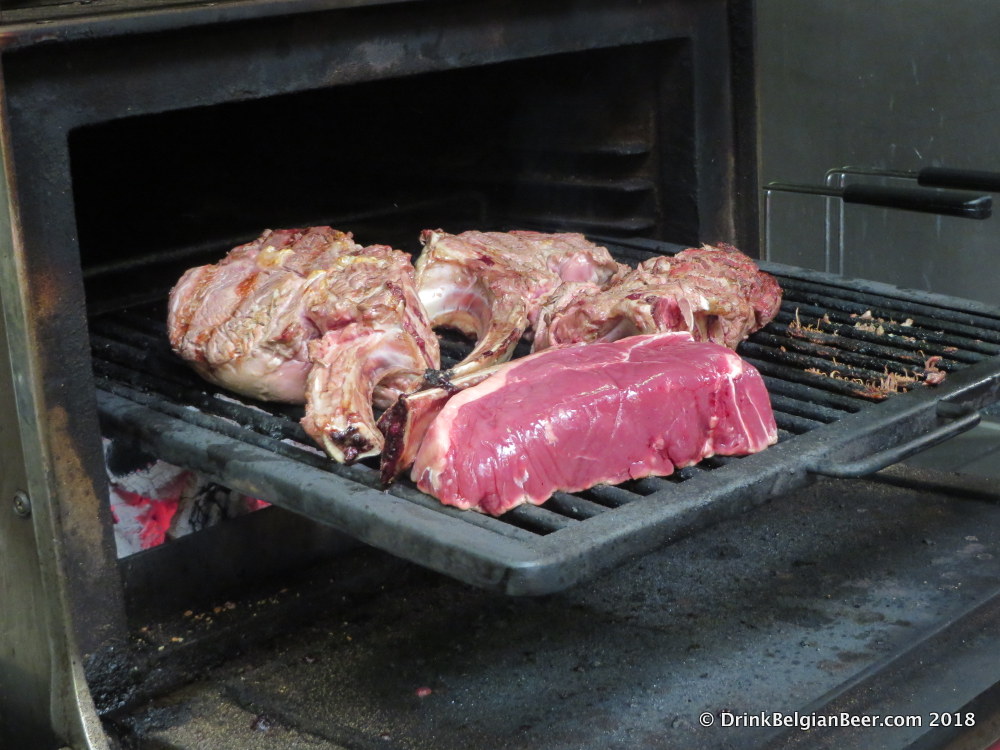 Three Tomahawk steaks, along with another steak on the grill at Piétrain. 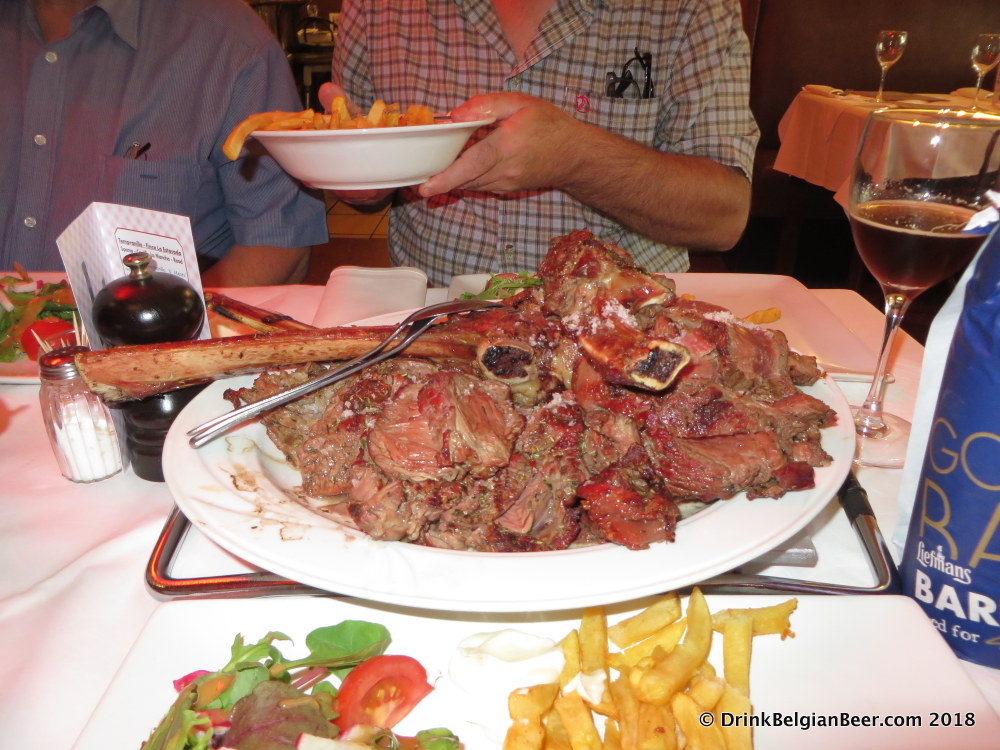 Tomahawk steaks savored during a meal at De Piétrain. The steaks were fabulous!

I visited in 2018 and 2019, and experienced fabulous meals and great brews. On my first visit, a group of Belgian friends and I savored delicious Tomahawk steaks, paired with frites (Belgian fries.) Owner Winant poured my group an aperitif of the delectable Mikkeller X Boon: Oude Gueze Calvados 2017. Mikkeller has this to say about this brew on their website: “The 2017 Mikkeller Oude Gueze lambic is a new unique collaboration between Mikkeller and Boon. Blending lambic from one to three years old, this blend is made in the traditional method of spontaneous fermentation in the Senne valley, Belgium. This special blend has a distinct twist being matured in oak foeders previously used for Calvados. Ideal before a meal or paired with cheese. Made in collaboration with the beer mastermind Frank Boon. Oude Geuze brewed by Boon.” 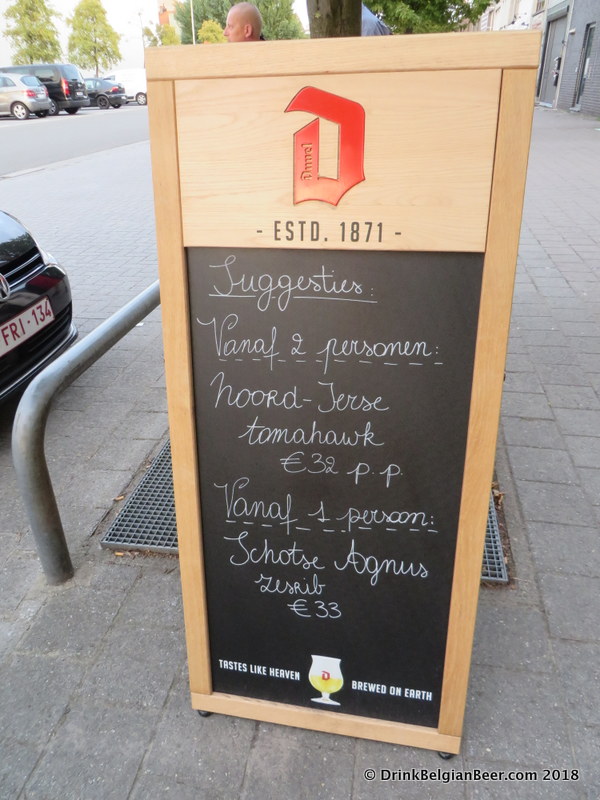 A blackboard outside the restaurant, with a couple of the day’s specials.

Winant paired the steaks with a version of Brouwerij Liefmans Goudenband that was barrel aged for 40 weeks in barrels the previously contained a California Pinot Noir wine. This Oud Bruin was strong (9.5% abv) yet very mellow, and paired well with the steaks. 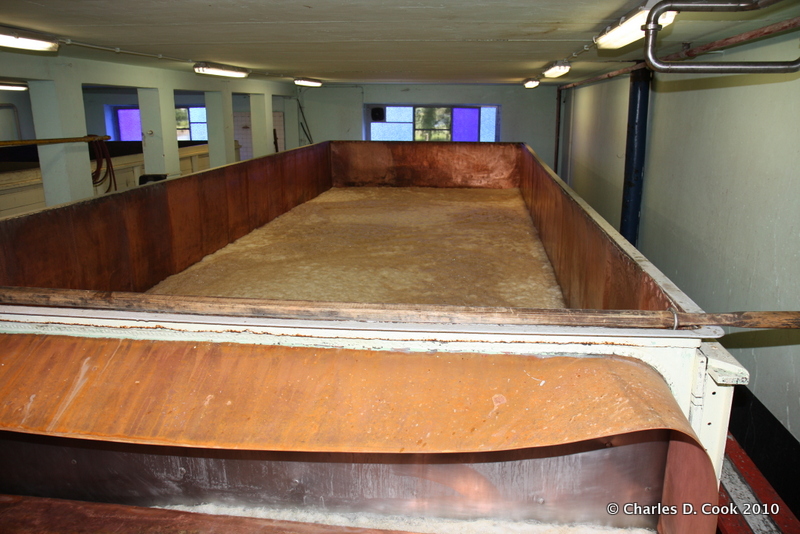 Wort in a huge open copper fermenter at Brouwerij Liefmans in Oudenaarde. 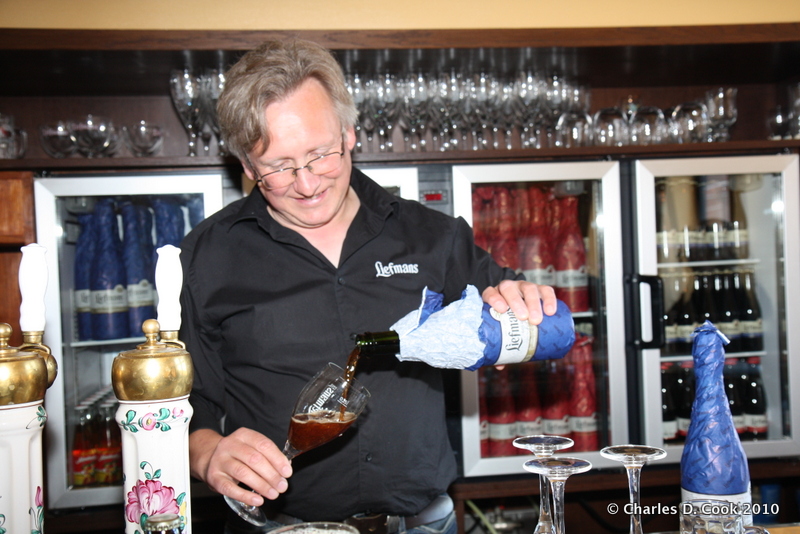 Marc Coesens, Head of Production at Brouwerij Liefmans, pouring a Goudenband at one of the brewery tasting cafes onsite.

After our meal, Winant suggest a digestif of Avec les bons Vœux de la Brasserie Dupont, Brasserie Dupont’s holiday ale. This strong saison (9.5% abv) has always been one of my favorite brews, and it never disappoints.

Our group were all so full that we skipped dessert, a mistake that I did not make on my next visit. See further below… 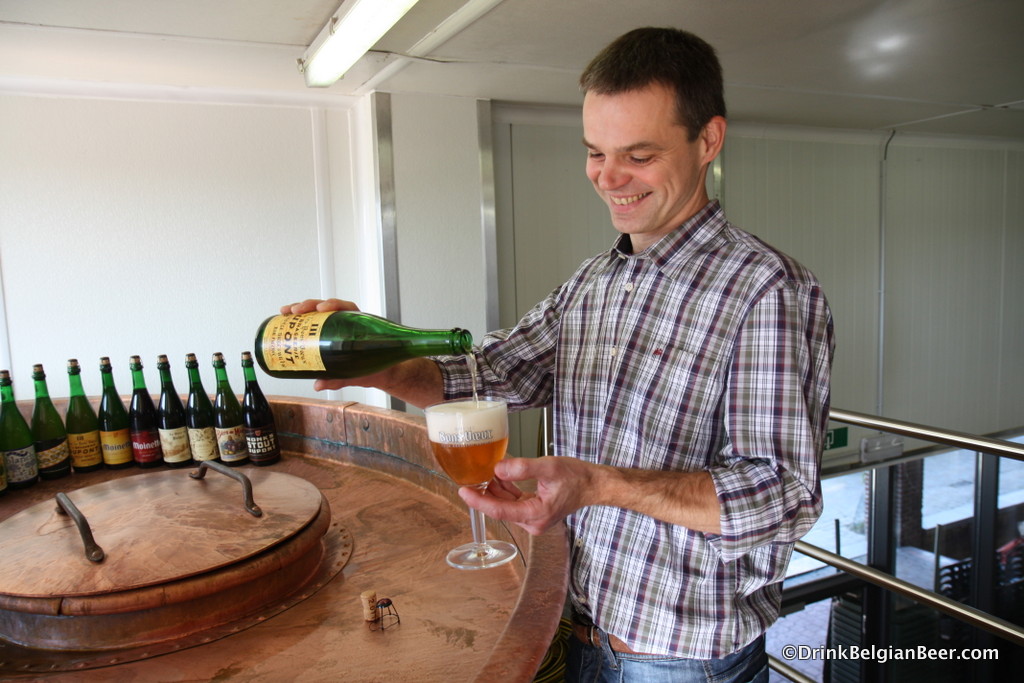 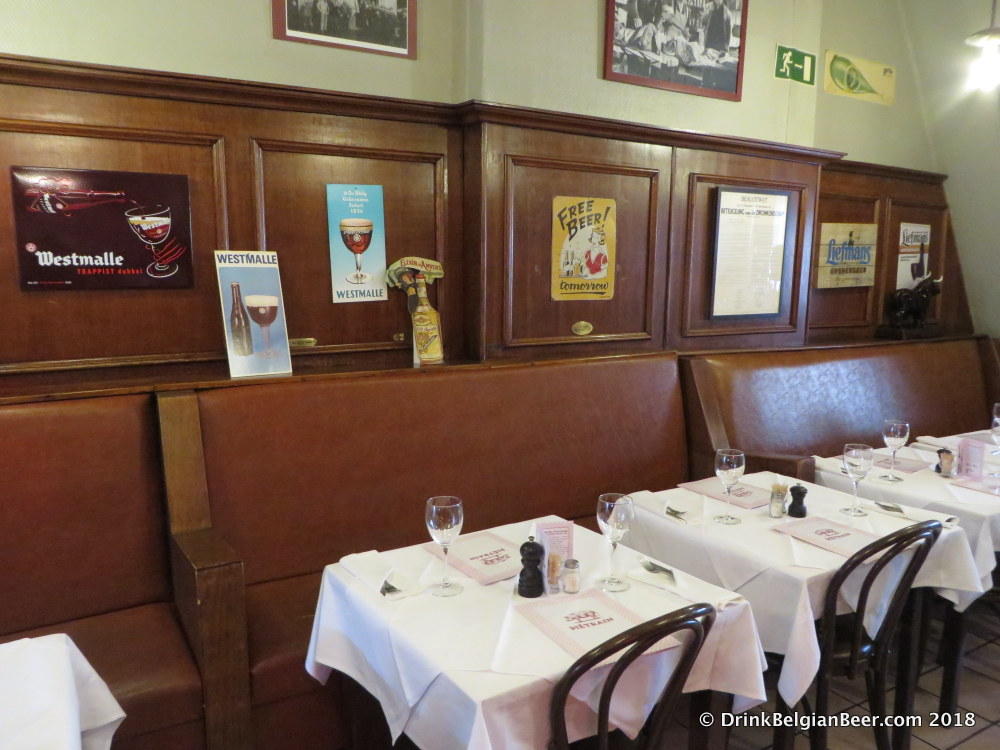 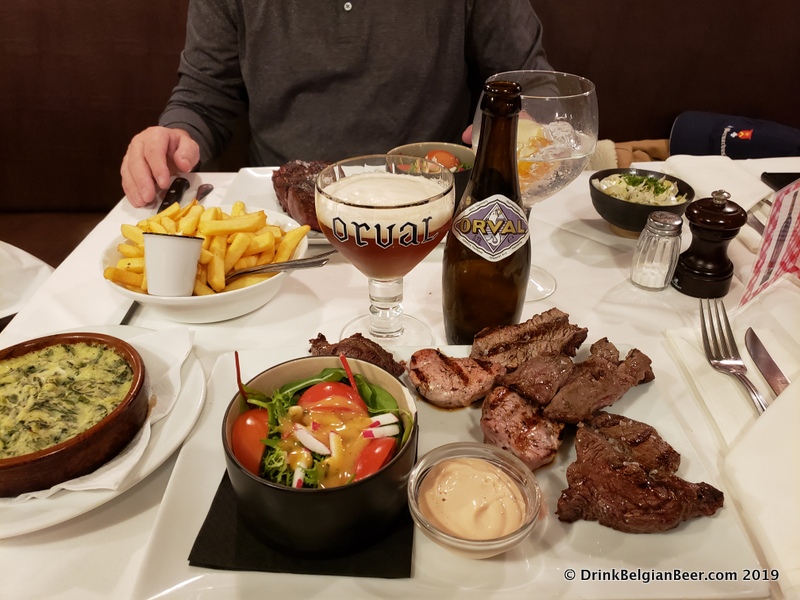 A meal at Piétrain of different grilled meats, paired with stoemp (pureed potatoes) and an Orval Trappist Ale. 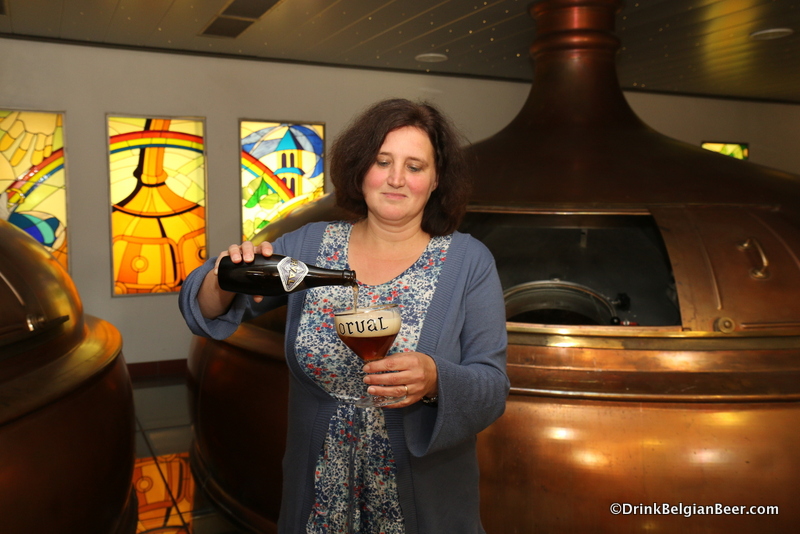 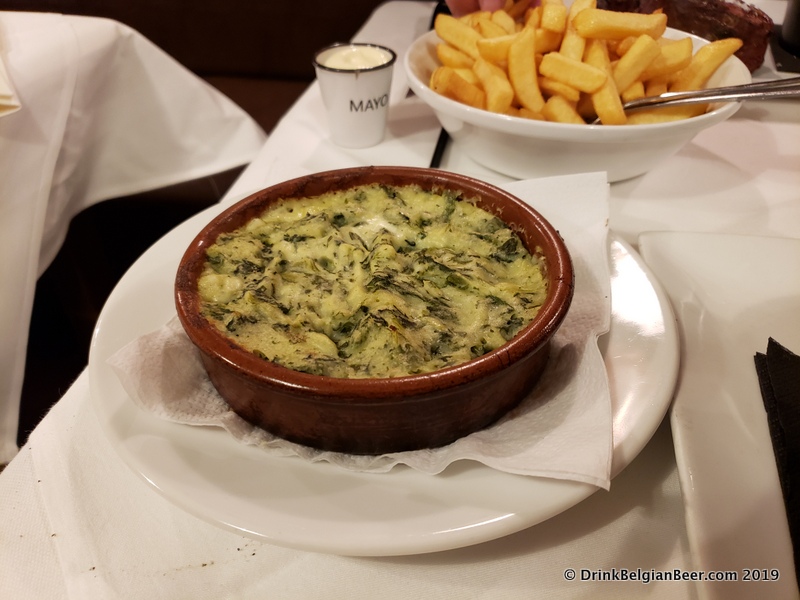 A close up of stoemp, a Belgian dish of pureed potatoes, often mixed with vegetables, herbs, and spices.

On my next visit in December 2019, I savored a meal of several different mixed grills, with a side dish of stoemp, a Belgian dish of pureed potatoes, often mixed with vegetables, herbs, and spices. I paired this with an Orval Trappist Ale, which is one of the world’s great Trappist brews. Orval is distinctive due to the Brettanomyces yeasts used in the bottling-conditioning process, which produce a very dry brew with a mild tartness and a mild to medium “funky” character. There is also a fine, medium hop bitterness produced by the dry-hopping process used in Orval’s production.

About the mixed grill pictured, Winant had this to say: “One was pork, which was salted and smoked. This adds a lot of flavor to the meat, and makes it very tender. The other meats were all beef: a ribeye from Poland, a Belgian Holstein ribeye, and a Simmentaler entrecote (sirloin steak).” 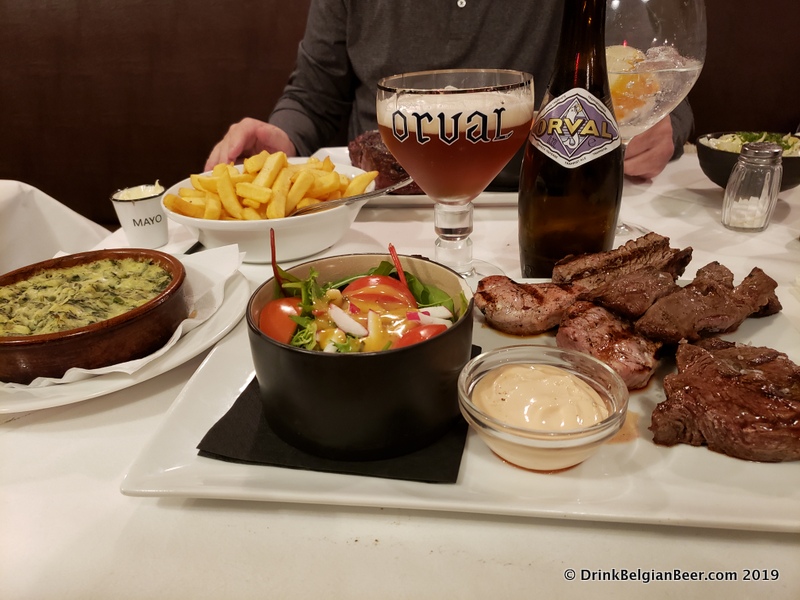 Another shot of the main course of different grilled meats, paired with stoemp and an Orval Trappist Ale.

Winant then suggested an after dinner tasting of a couple of lambics from Brouwerij Boon’s family of Monoblend Oude Geuze brews, in this case, Vat 108 and 109. Having already tasted these excellent lambics before, I quickly agreed to his suggestion. About the Monoblend family of lambics, Karel Boon, son of Frank Boon, had this to say: Mono’blend’: These are composed of about 90% of three year old, and sometimes four year old, lambics drawn from a single foeder (a huge oak barrel) and blended with about 10% one-year old lambic to spark a refermentation in the bottle. This is always the case with our monoblends. Without the bottle conditioning, you’d have a flat beer, not made to age, and not as complex.” Karel Boon and his brother Jos are taking over day to day operations at Brouwerij Boon, as their father Frank eases into a well-deserved retirement. 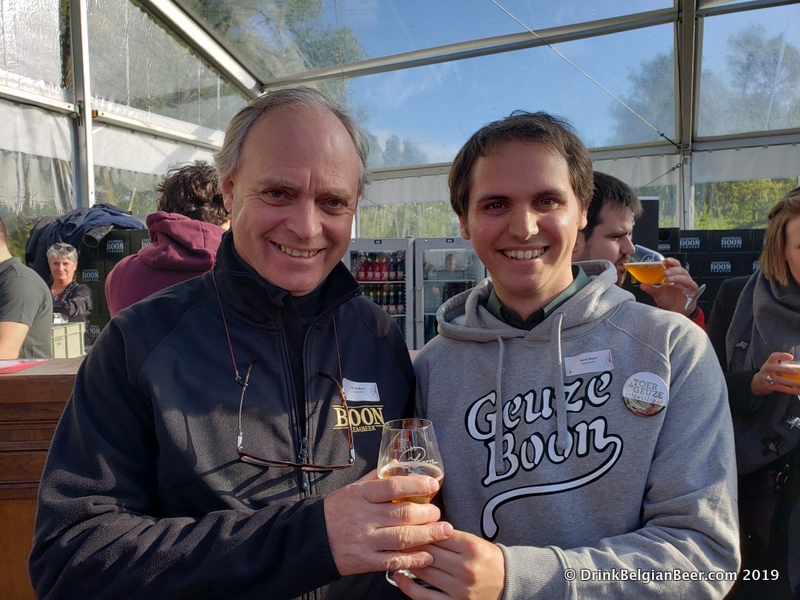 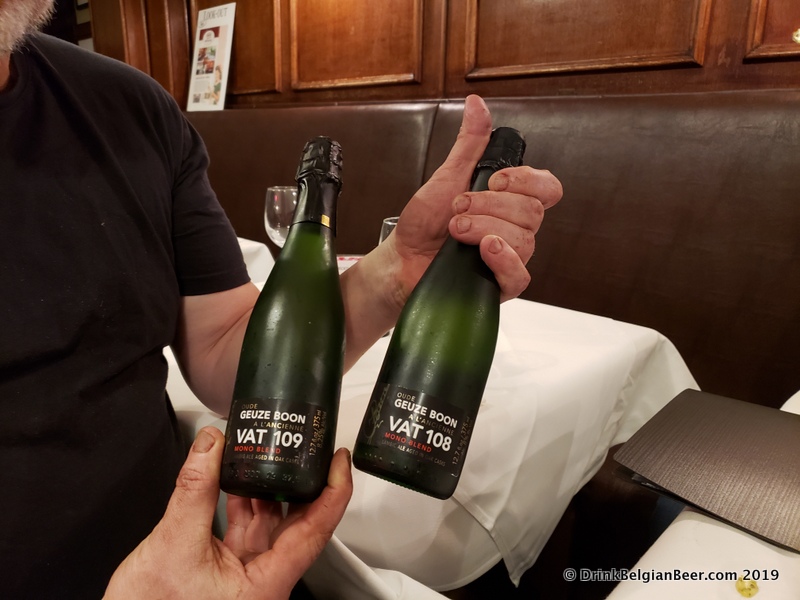 All of the Monoblends that I have tasted have been very dry, complex, and among some of the most pleasing Oude Geuzes I have experienced. The 108 and 109 are among my favorites. Vat 31 is the most recent Boon Monoblend to be released for sale. 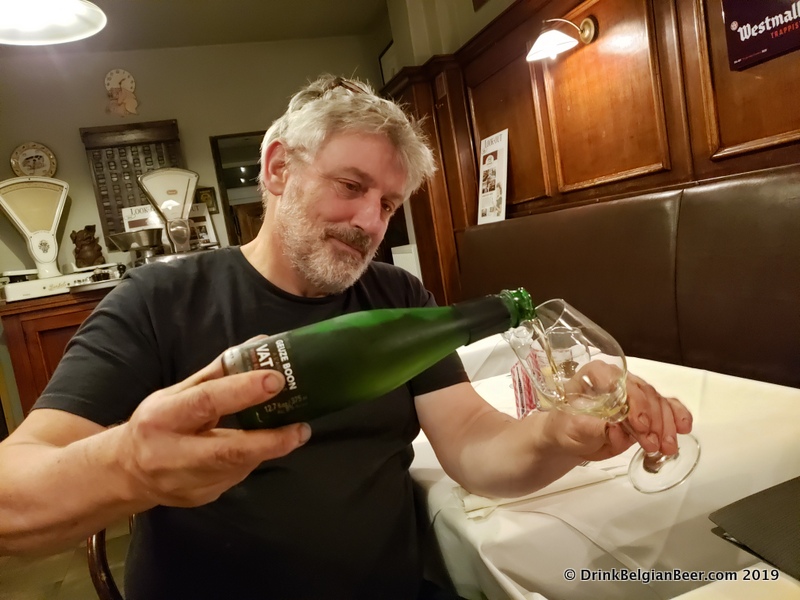 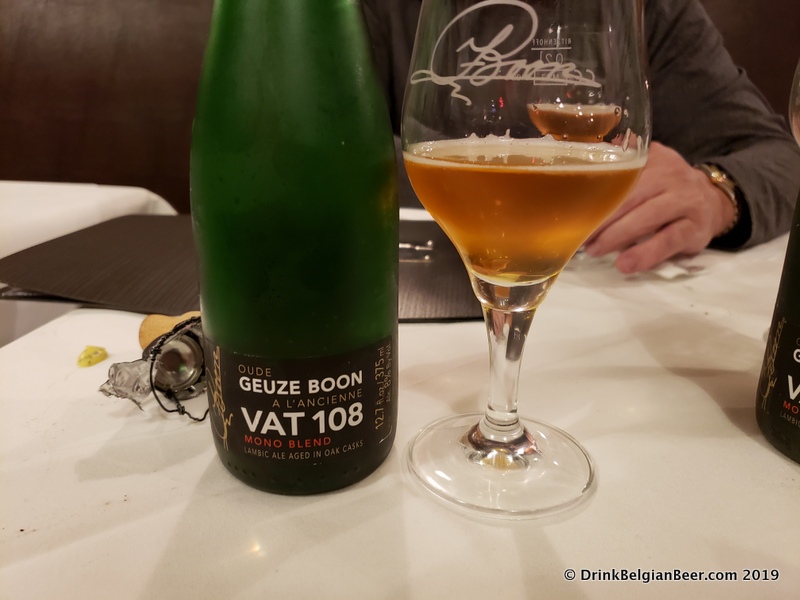 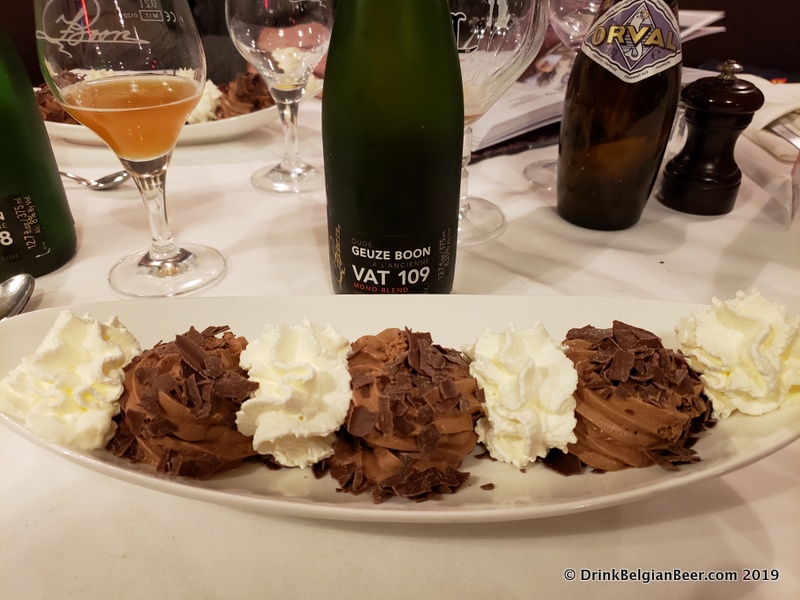 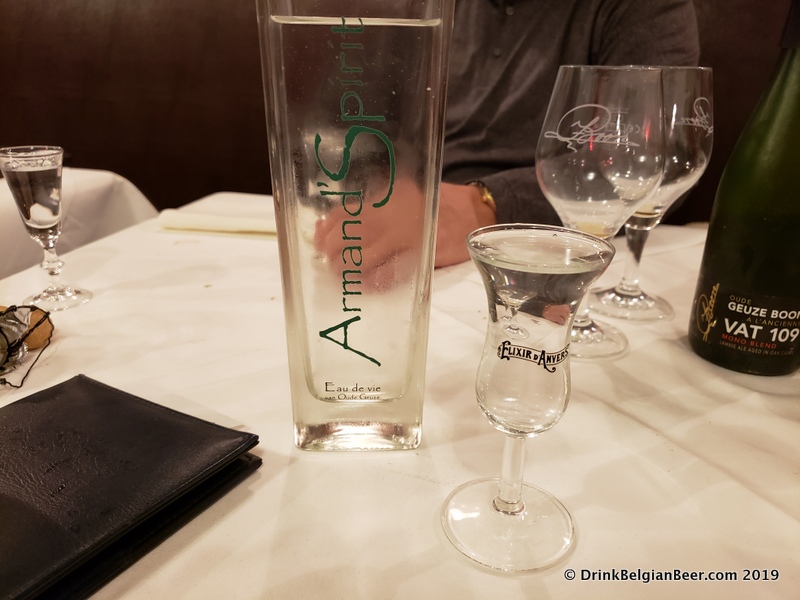 Armand’Spirit Eau de Vie, a liqueur that was created by the distillation of Brouwerij 3 Fonteinen lambics from overheated bottles.

After savoring the two Boon Monoblends, Winant suggested a digestif of Armand’Spirit, an Eau de Vie liqueur that was created by the distillation of the lambics that were ruined by the overheating of thousands of bottles of Brouwerj 3 Fonteinen lambics in a warehouse in 2009. I have tasted Armand’Spirit on a number of occasions, and always enjoyed it. This night was no exception. 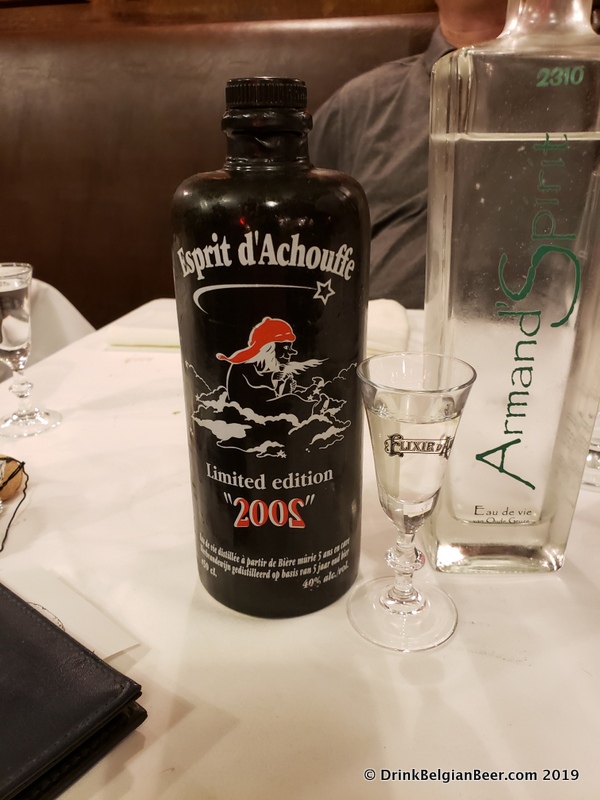 Winant then brought out a bottle of Esprit d’Achouffe 2002 from Brasserire d’Achouffe, in Houffalize, an Eau de Vie made by the distillation of five year old beer. I had not tasted this in a few years, and it was a great nightcap after a great meal at Cafe/Restaurant Piétrain.

Piétrain is open from 12 pm-2:30 pm from Tuesday through Friday, and 6 pm-10 pm Tuesday through Saturday. It is closed at lunchtime Saturdays, and all day Sundays and Mondays, as well as holidays. It is located at Lange Lobroekstraat 25 in Antwerp. The telephone is 32 3 236 51 62. I highly recommend it!