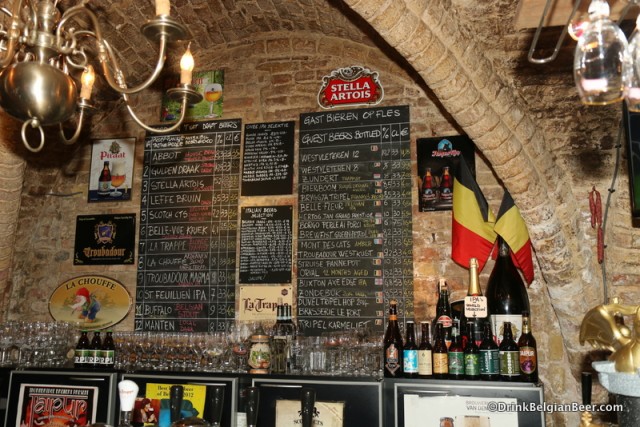 The wonderful, atmospheric new “Le Trappiste” in Brugge (Bruges) is already making fans from all over the world, despite opening just a little over a year ago. “The Trappist” first lured beer lovers on May 9, 2013, but it still feels new.

Co-owner Regnier De Muynck has been a fixture on the Belgian beer scene in Brugge and in Brussels for many years now. He still leads Americans and others on beer tours around “The Beer Country.” In fact, I ran into him and a small tour group at 3 Fonteinen in Beersel, ‘t Molenhof and De Struise Brouwers in Oosvleteren, and at his own bar, in the space of just a few days in April. 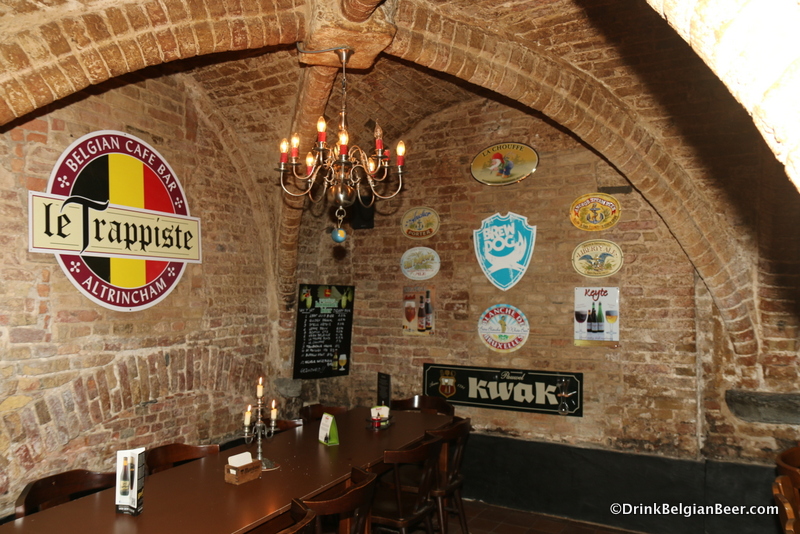 A cozy corner at Le Trappiste.

Regnier previously ran places like Bier Tempel in Brussels and Brugge before beginning a new venture, in a historic 13th century cellar, with a partner. While cellar bars in historic Bruges are not uncommon, such as De Zolder and Taverne Curiosa, none have such beautiful vaulted arches as Le Trappiste. 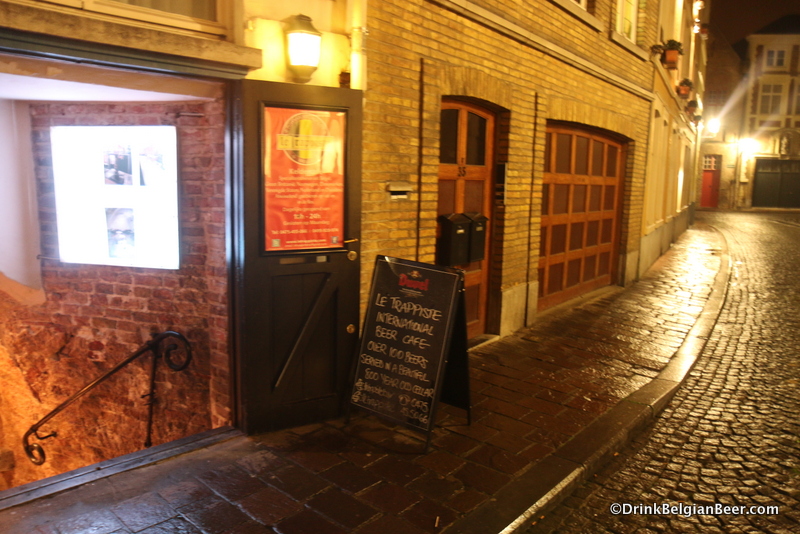 Entrance to Le Trappiste. It is located just 300 meters from the Grote Markt in Brugge.

The first location of Le Trappiste is in the U.K. and opened in 2003. 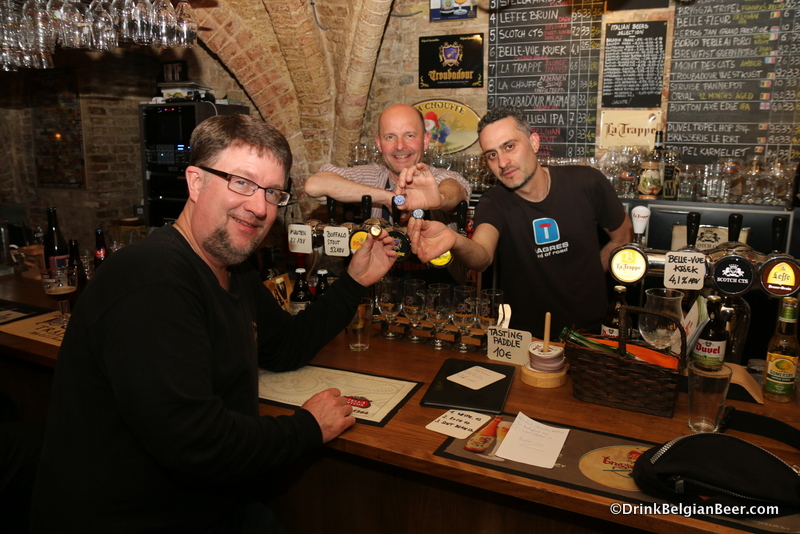 Me, with co-owners Regnier De Muynck (left) and partner Andrea D’Aniello (right) behind the bar.

I paid my first visit in November of last year, and followed up with a memorable Tuesday evening, April 22. A nightcap blind tasting of Rochefort 10, St. Bernardus Abt 12, and Westvleteren 12 was quite entertaining. I know I slept well that night. 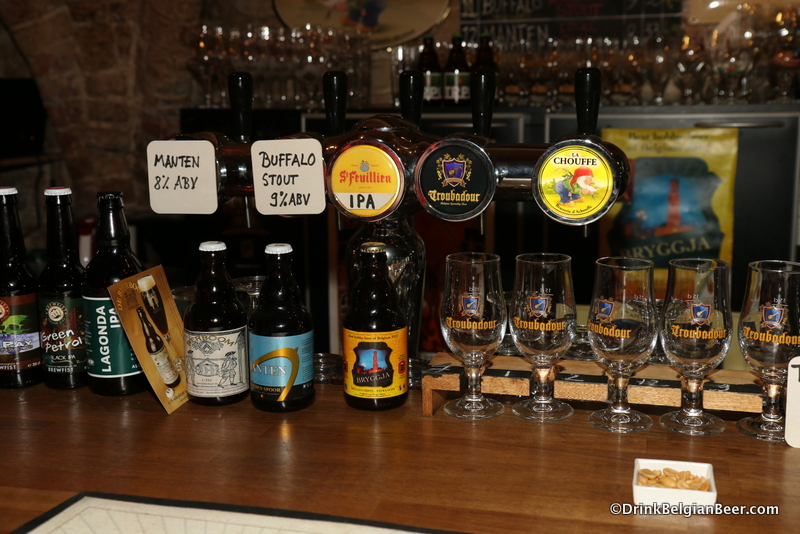 Some of the beers on draft at Le Trappiste on April 22.

Le Trappiste is the first bar in Brugge to offer a significant number of artisanal beers from foreign countries in the city, on tap and in bottles, while still having a very diverse and desirable lineup of Belgian brews. Le Trappiste is one of the few bars in Belgium to offer brews from the U.K., Italy, Japan, New Zealand, and Scandanavia. 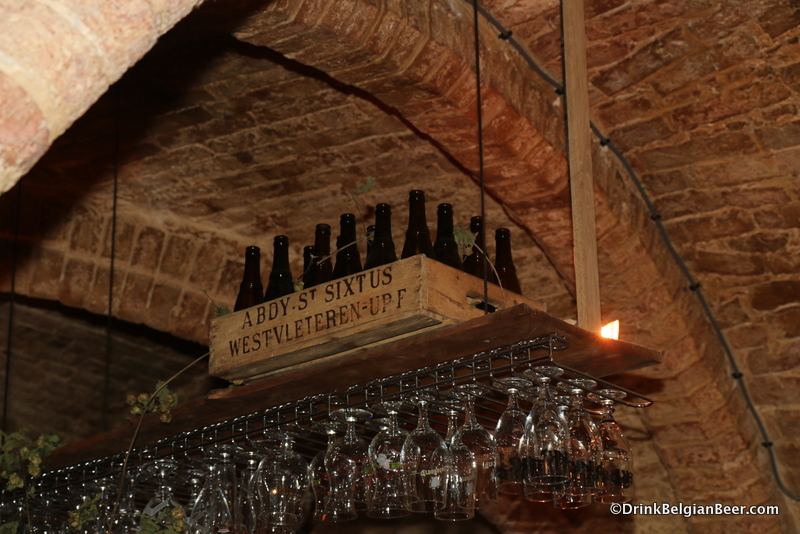 As the name suggests, many of the world’s Trappist beers are on offer, often including the hard to obtain Westvleteren 8 and 12 from De St. Sixtus Abbey van Westvleteren. There is also plenty of lambic, gueuze, and kriek, and more spontaneously fermented brews on the beer menu as well. These include five from Cantillon, several from 3 Fonteinen, Tilquin, Oud Beersel, Boon, and more. 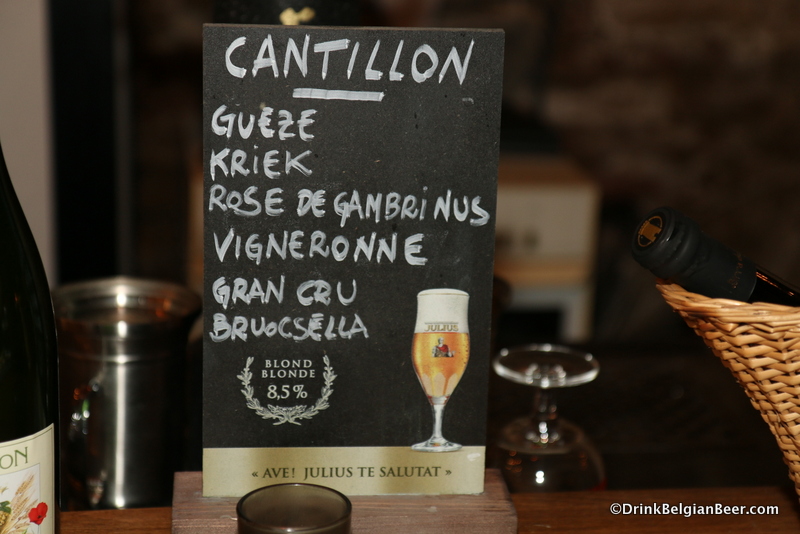 Cantillon, anyone? They’ve got five of em at Le Trappiste. 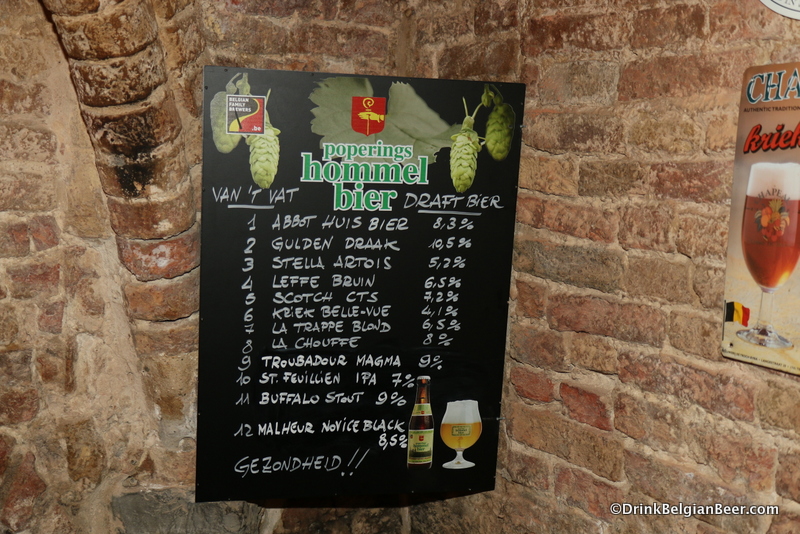 The number of beers on draft went from 12 to 15 just last week.

If you are in Bruges, or headed there anytime, get there. If you are not, well, it’s time to make some new travel plans. Brugge is a great, walkable beer city, and Le Trappiste has quickly made it up to ‘t Brugs Beertje and Cafe Rose Red territory. Meaning: a must visit. 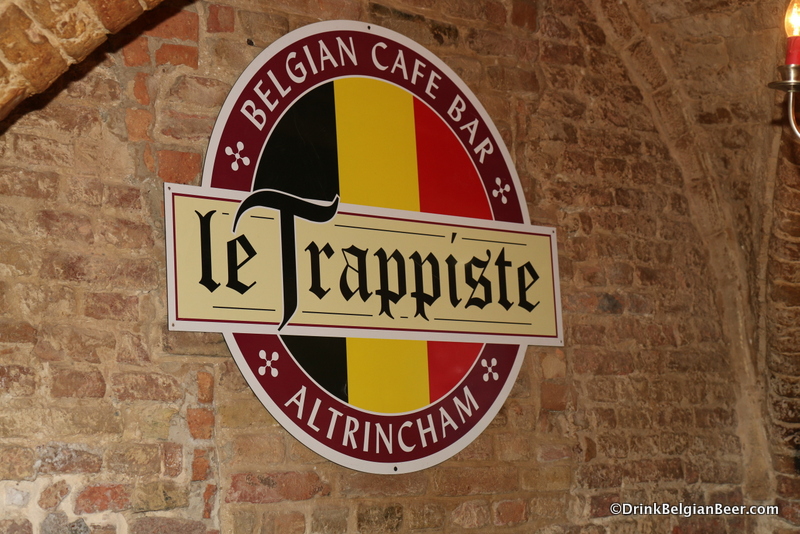 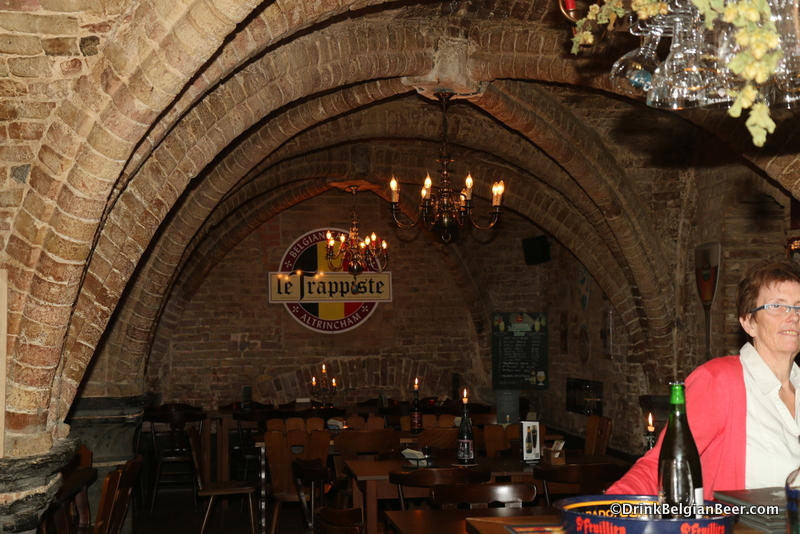 Another look inside the cellar bar. 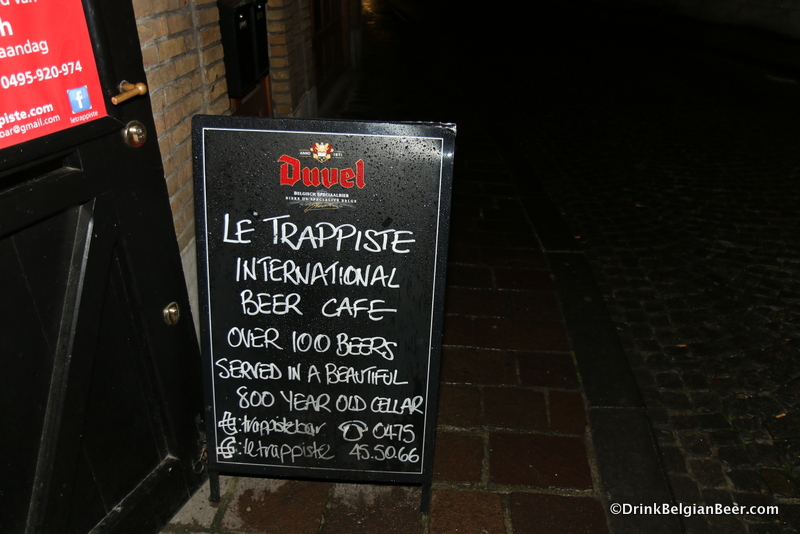 Come on in, we have your beer!! 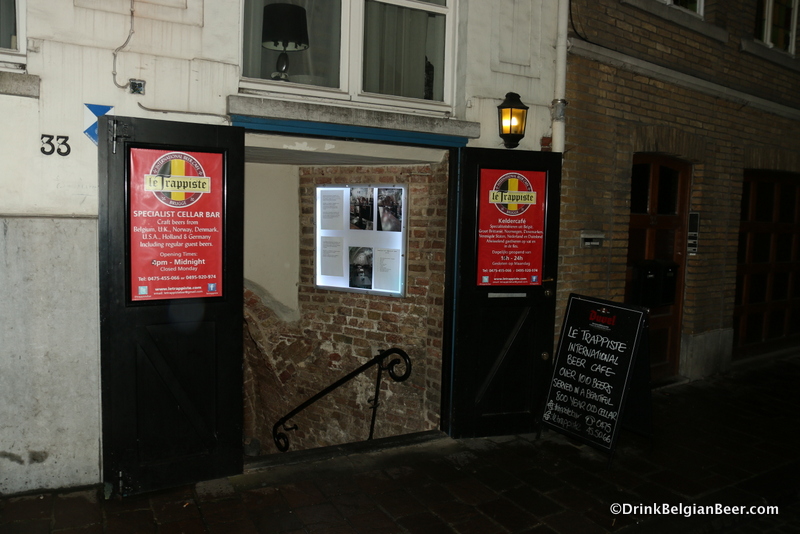 Another shot of the entrance. 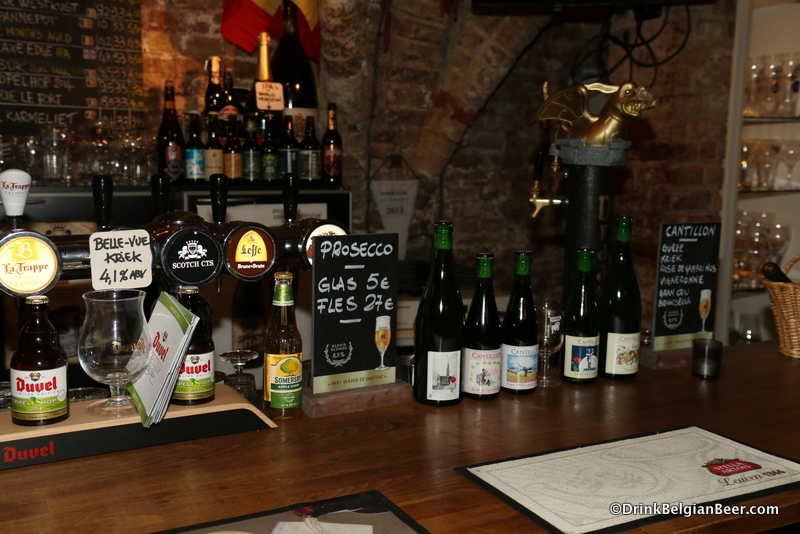