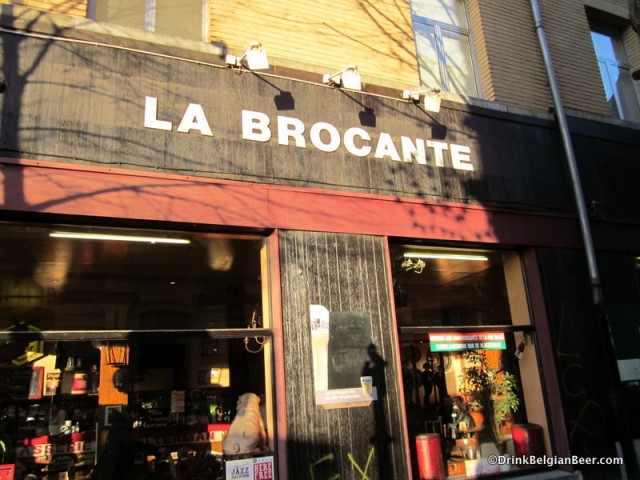 It’s a classic old boozer that’s been around for quite a few years, yet it still beckons with Bruxellois charm, as well as friendly, knowledgeable staff, and a fine beer selection. Not to mention good, inexpensive food.

Café La Brocante is located on a corner next to Place du Jeu de Balle, where a daily flea market is held. This helps explain the cafes’ early opening hours. The cafe is nicely decorated with Belgian breweriana, much of it dating to the 1980’s and 1990’s. While it may seem a big faded at first, it is part of Brocante’s charm. 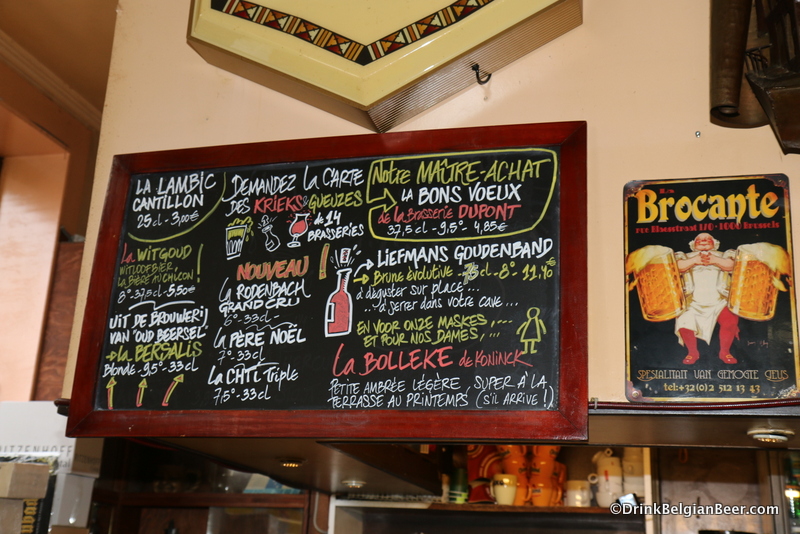 A beer blackboard at La Brocante. This one is a newer addition.

The Marolles area is a ways from the center of Brussels and its Grand Place, nearer the Brussels Midi/Zuid/South train station, so it isn’t overloaded with tourists. La Brocante is a great place to drink where the locals do and savor a list of beers that includes many Oude Gueuzes and Oude Krieks, including of course local favorites Cantillon and Tilquin. Also, beers from Brouwerij Boon (including Moriau and DeKoninck Oude Geuze, made at Boon) as well as 3 Fonteinen, Girardin, Lindemans, Oud Beersel, Timmermans, and more. In fact, the beer blackboard, during my visit on 4 November, says to request their special lambic menu, which has gueuze and kriek from 14 producers. 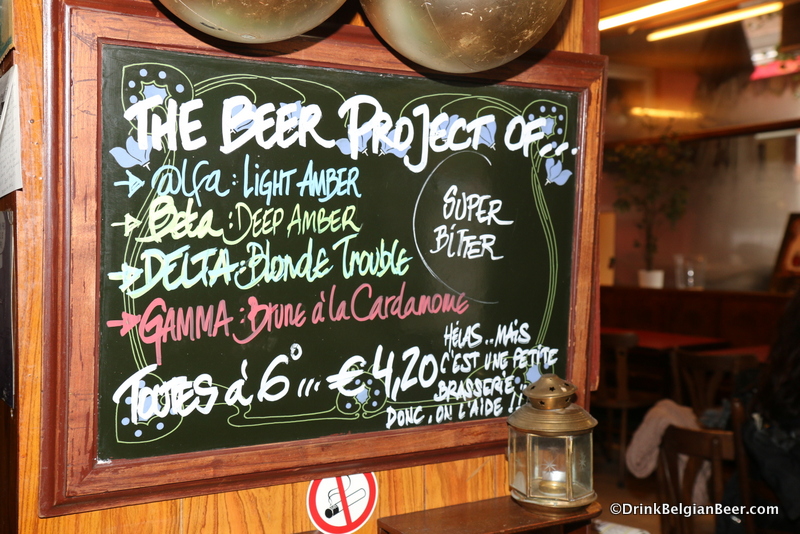 Another beer blackboard at La Brocante.

There are also a lot of local and regional Belgian brews, from breweries such as hometown favorite, the great Brasserie de la Senne, as well as De Ranke, De Ryck, Hof ten Dormaal, and more. The Trappists are also well represented. 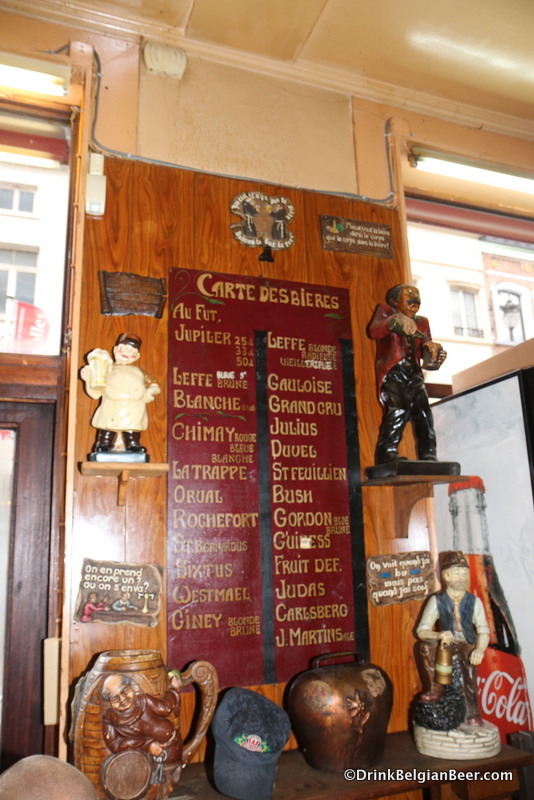 Our waiter was a very knowledgeable, enthusiastic, and attentive young beer lover, who pointed out some new beers not on the main menu and offered some recommendations. You can’t ask for more, especially at lunchtime on a Monday in early November, when many places in Brussels are closed. 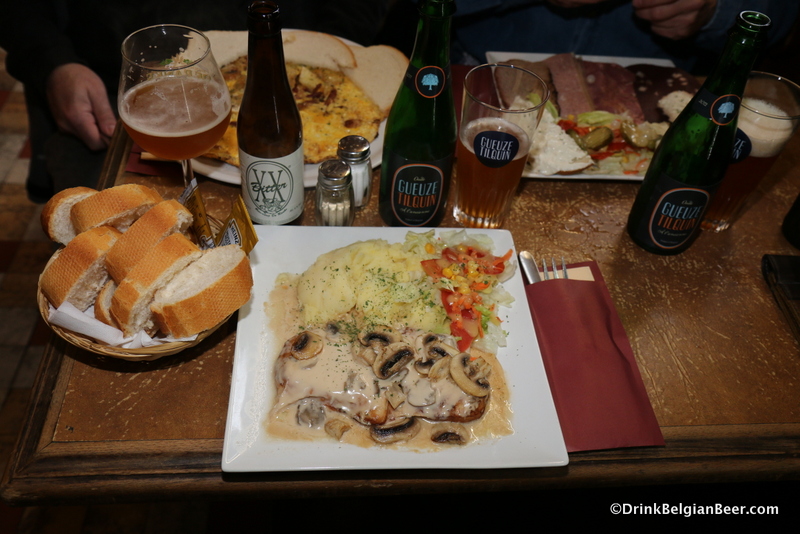 A fine dish of chicken with mashed potatoes at La Brocante. 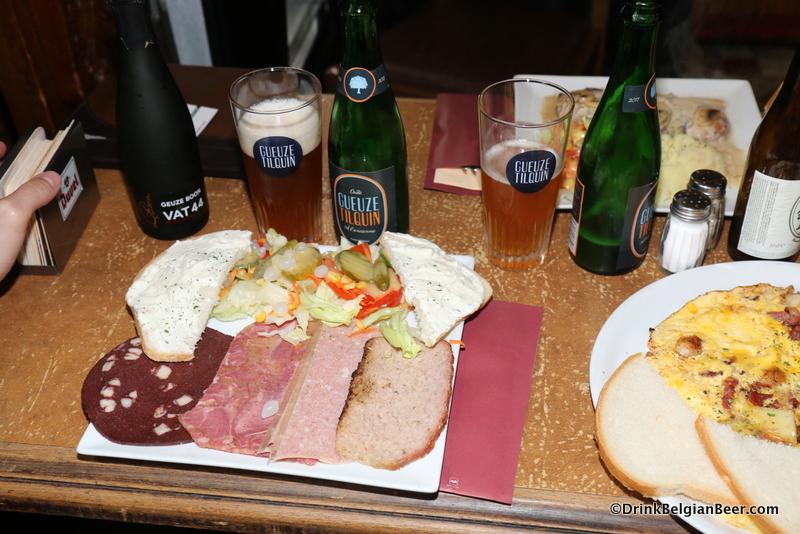 A plate of local meats at La Brocante. 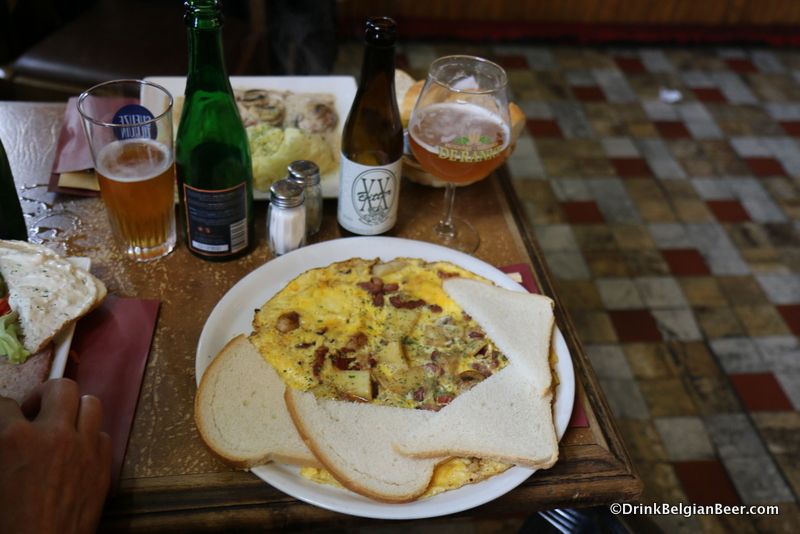 An omelet at La Brocante.

Fortunately, La Brocante was open, and was a perfect place to have lunch after a few hours at Brasserie Cantillon. Danny Van Tricht, Andre Van Gansen and I all opted for different dishes, and were very happy with our meals. I had a chicken dish, covered with mushrooms and with mashed potatoes. Yum. Paired with Oude Gueuze Tilquin à l’Ancienne, it was delectable. Andre’s plate of fresh local meats and Danny’s omelet with cheese, bacon, potatoes, and mushrooms, also impressed. Yes, La Brocante serves breakfast dishes as well. All at very reasonable prices. 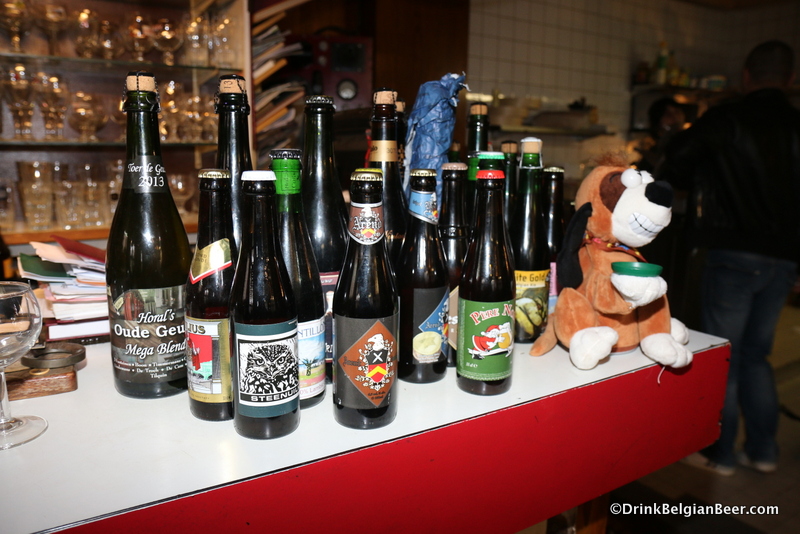 Some of the beers on offer at La Brocante. 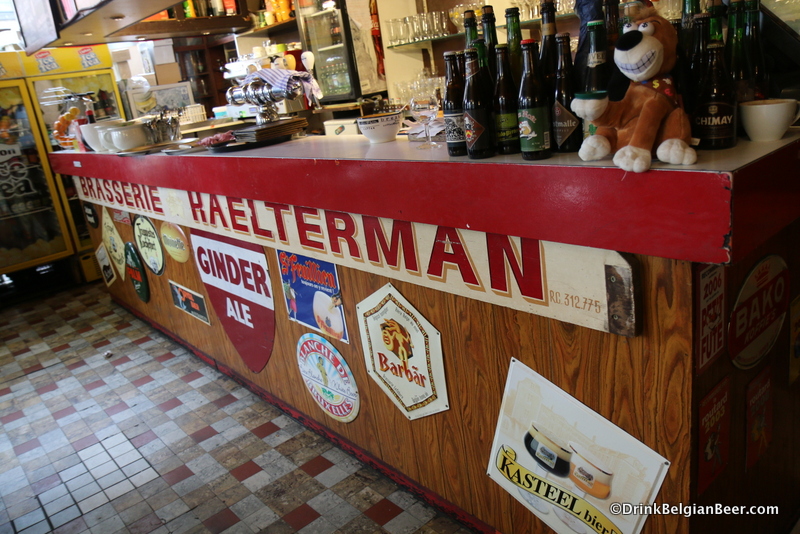 The bar at La Brocante.

La Brocante is open from 6 am to 6 pm on Mondays and Saturdays, from 6 am to 7 pm Tuesday to Friday, and Sundays. There is sometimes live music, usually jazz, on Sunday mornings. The address is Rue Blaes (Blaesstraat) 170. Tel: 25121343. 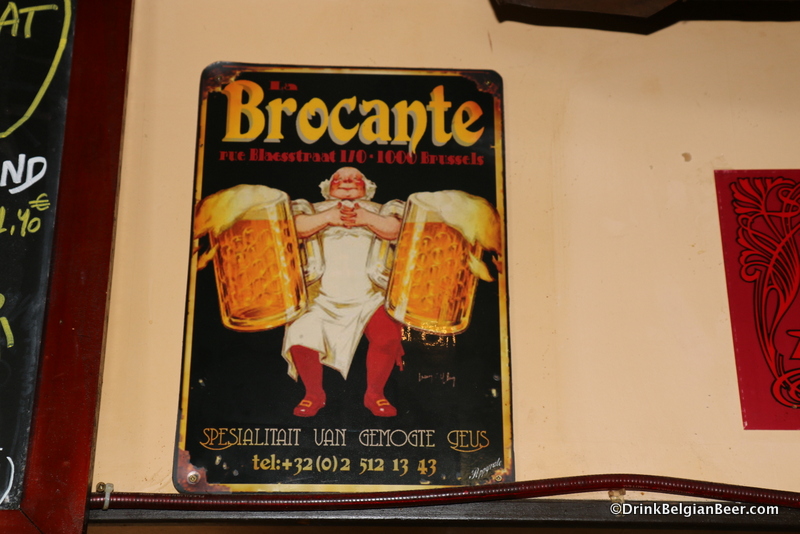 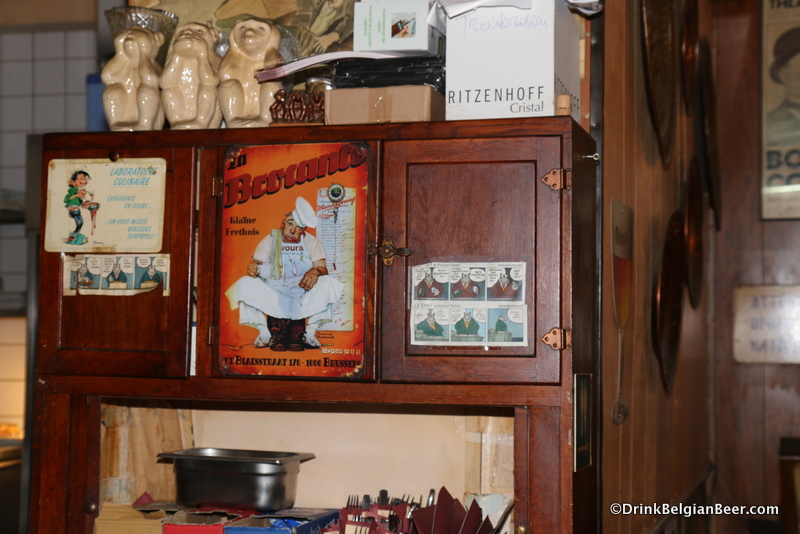 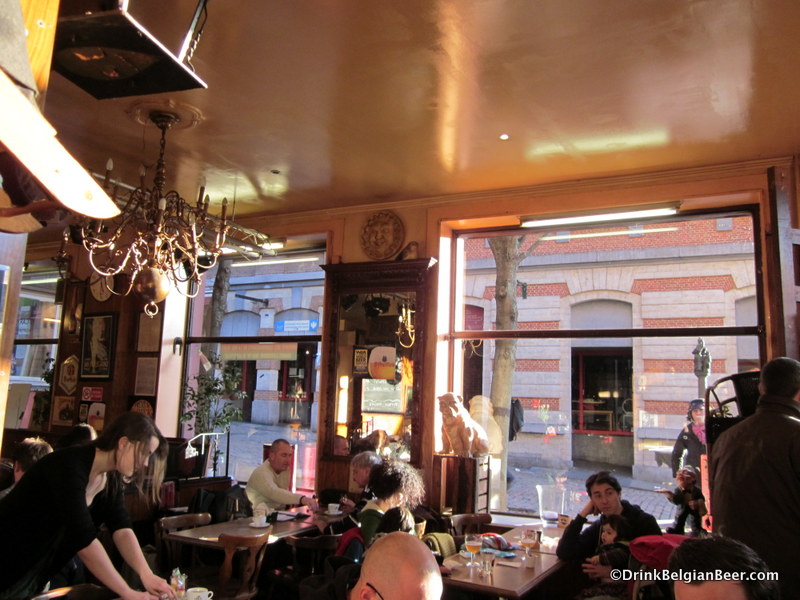 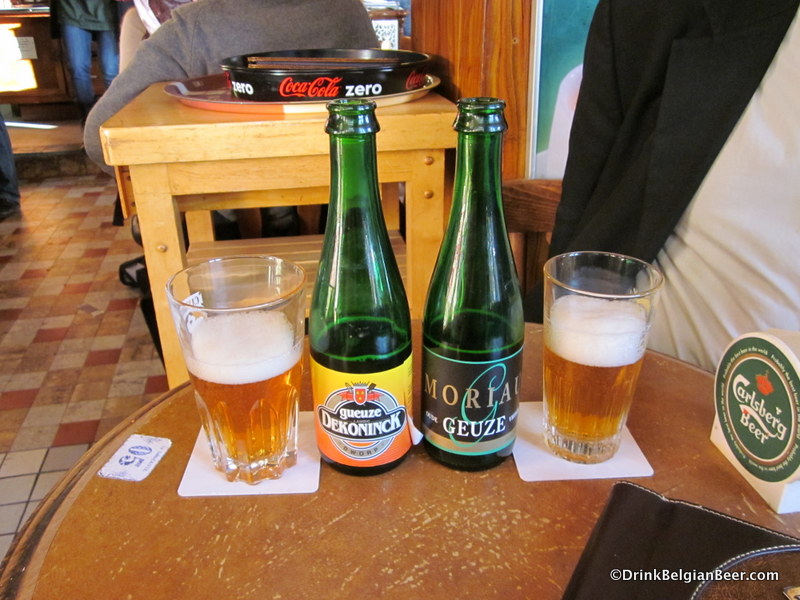