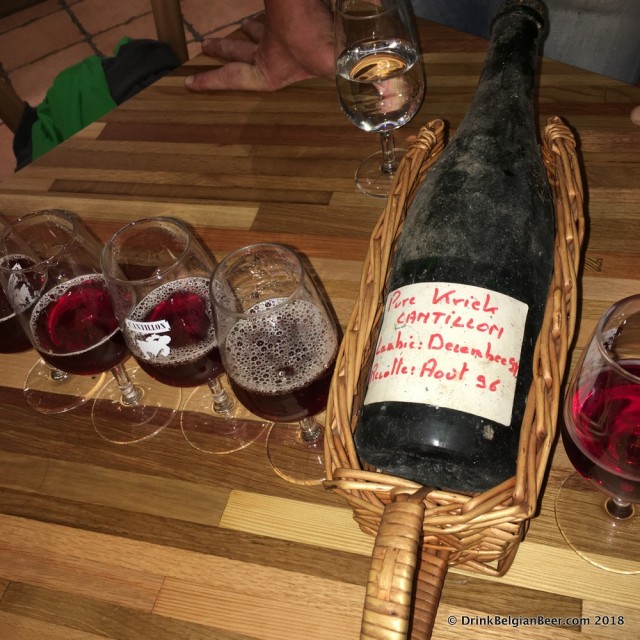 Brasserie Cantillon’s Lou Pepe Kriek is one of the most sought-after fruited lambic beers in the world. It has intense notes of sour cherries, with a noticeable lambic funkiness, especially with bottles with at least several years of age. Lou Pepe Kriek is made by using two year old lambic, much of which has been aged in former Bordeaux wine barrels, and adding sour cherries to it. The maceration of the cherries with the lambic takes about 2 to 3 months. The preferred variety of cherry is Schaerbeekse, from the Morello family of cherries. Schaerbeekse cherries are local to Belgium, and the Schaerbeek cherry trees were common in the area of Brussels and its environs up until a couple of decades ago.

Note that the word “Lou Pepe” is an affectionate term used in the southwest of France for a grandfather. Jean Van Roy’s father, Jean-Pierre Van Roy, often took his family on holidays to this French region, and so he is known as “Lou Pepe” to his children and grandchildren. That is the origin of the name for the Lou Pepe range, which consists of Gueuze, Kriek, and Framboise. 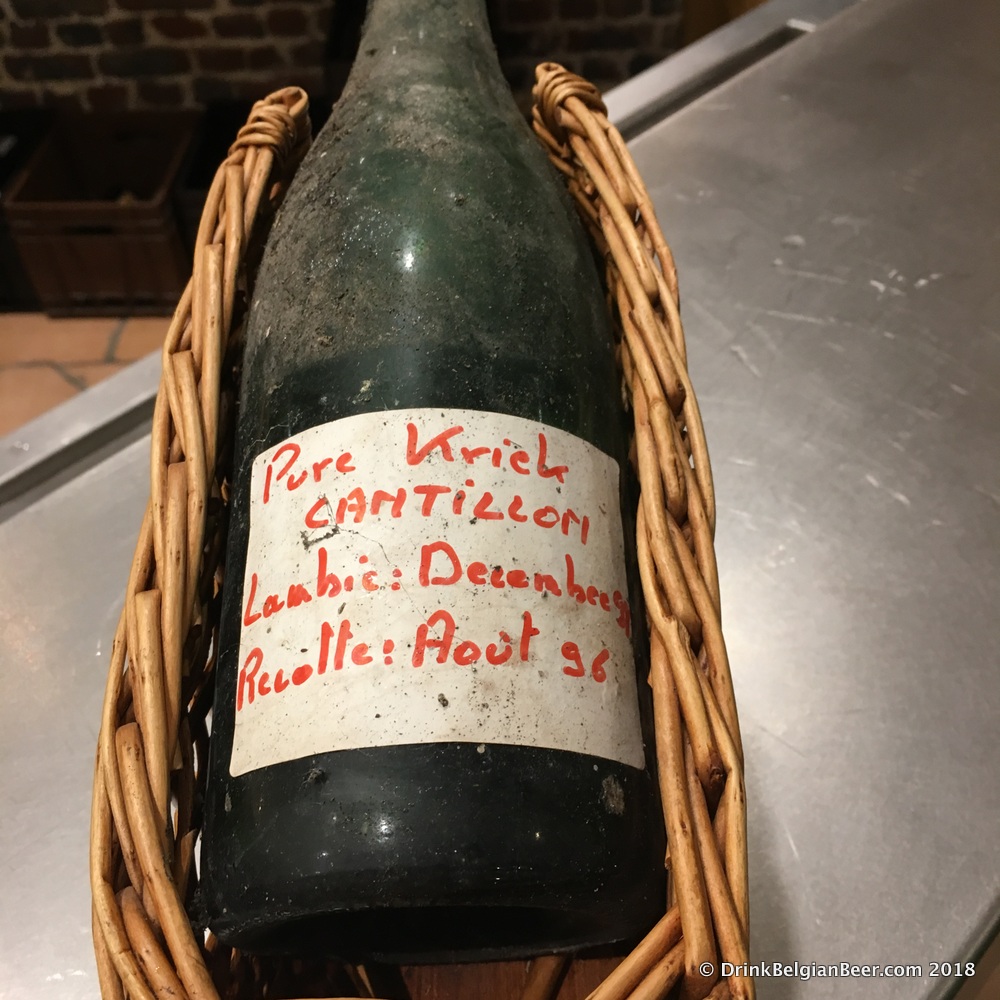 Pure Kriek Cantillon 1996, the predecessor of, and an inspiration for, Lou Pepe Kriek.

During my visit to the brewery on 27 August 2018, the Monday after the second edition of the superb BXL Beer Fest in Brussels, a number of lambic beer lovers paid a visit to Cantillon before heading home, to sample as many of the superb beers brewed on site as possible. One of these lambic drinkers was Jeffrey Stuffings, Founder and Owner of Jester King Brewery in Austin, TX.

As the brewery and first floor tasting area was quite busy, Cantillon brewmaster and fifth generation owner Jean Van Roy suggested we move to the new, upstairs tastings room. Our group, which also included lambic beer lover Amy Fowler of Massachusetts, sampled a number of beers, including Lou Pepe Kriek 2015. Jean remarked: “My ancestors were producing kriek beers going back as far as the opening of this site in 1900, so we have always been quite familiar with producing kriek beers. In 1996, I thought to do an experiment. I added Schaerbeekse cherries, harvested in August of 1996, at a ratio of about 300 grams per liter, to a lambic brewed in December 1994. We allowed about 2 to 3 months of maceration with the lambic. We had about 40 to 60 barrels overall of the Schaerbeekse Kriek that year. One of these barrels, a former Port barrel, produced a really exceptional kriek, I don’t recall whether it was a first or second use Port barrel, but the resulting kriek was really incredible. So, we bottled the kriek from this barrel, and called it Pure Kriek Cantillon. The barrel yielded sixty bottles (of the 75 cl size) and I only have ten bottles left. And that is what you are tasting now.”

The Pure Kriek Cantillon 1996 was really phenomenal. The amount of fruit character and intensity were incredible, nay, astounding, for a beer with nearly 22 years of age. While I have tasted older Cantillon Kriek lambics before and had fine results- see this article about tasting a 1975 vintage, the Pure Kriek Cantillon 1996 easily is among the most intense and fruit forward aged lambics that I have ever tasted. It also was still very balanced, with a restrained, though noticeable, mild tartness. 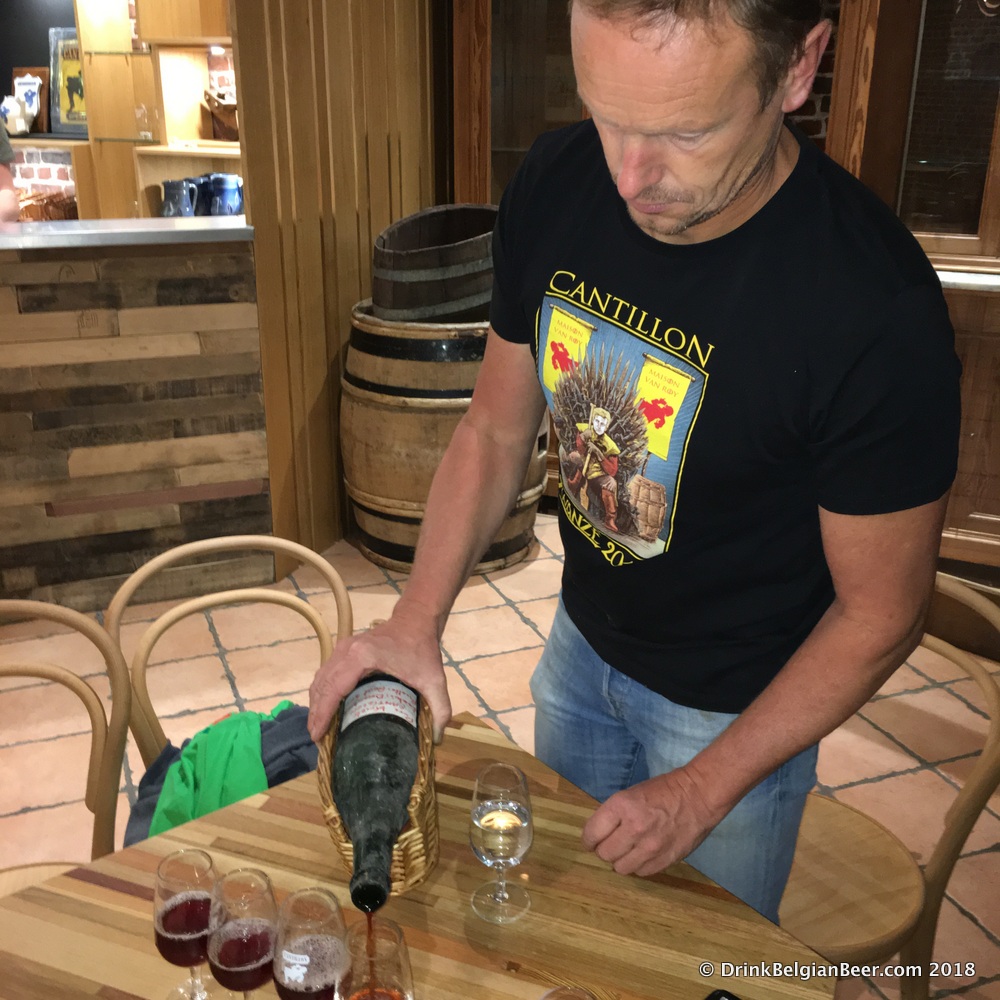 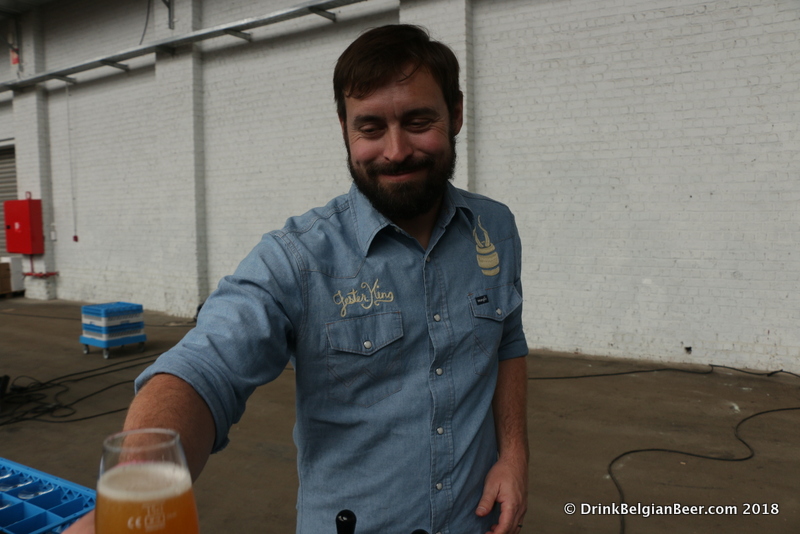 Jeffrey Stuffings had this to say: “I was shocked by how bright and fresh the Pure Kriek presented for its age. The previous fruit lambics I’ve had from the 80s and 90s haven’t presented nearly as vibrant. The fruit character was fantastic, the acidity was still soft and balanced, and the oxidized character was fairly restrained, especially for a beer its age. It was such a great testament to the ability of wild yeast, bacteria, aged hops, and acidity to preserve beer for very long periods of time.” 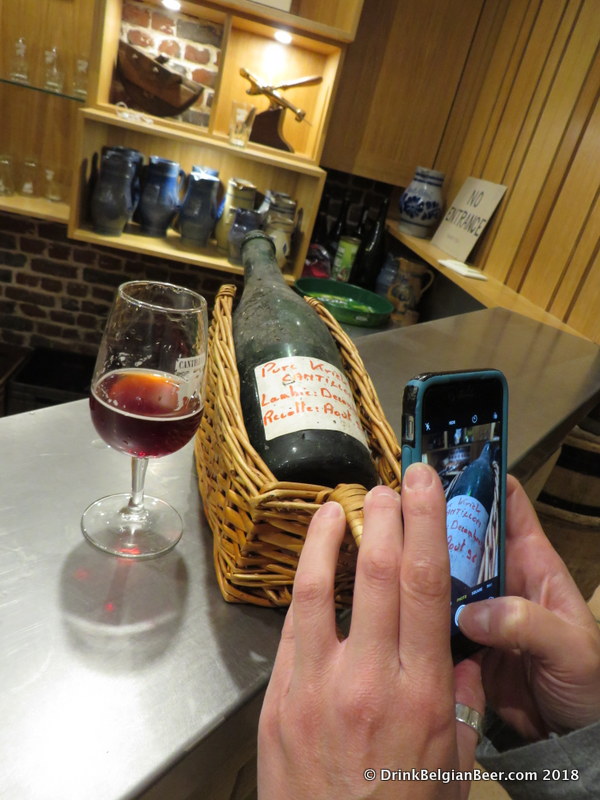 This was a much photographed bottle. 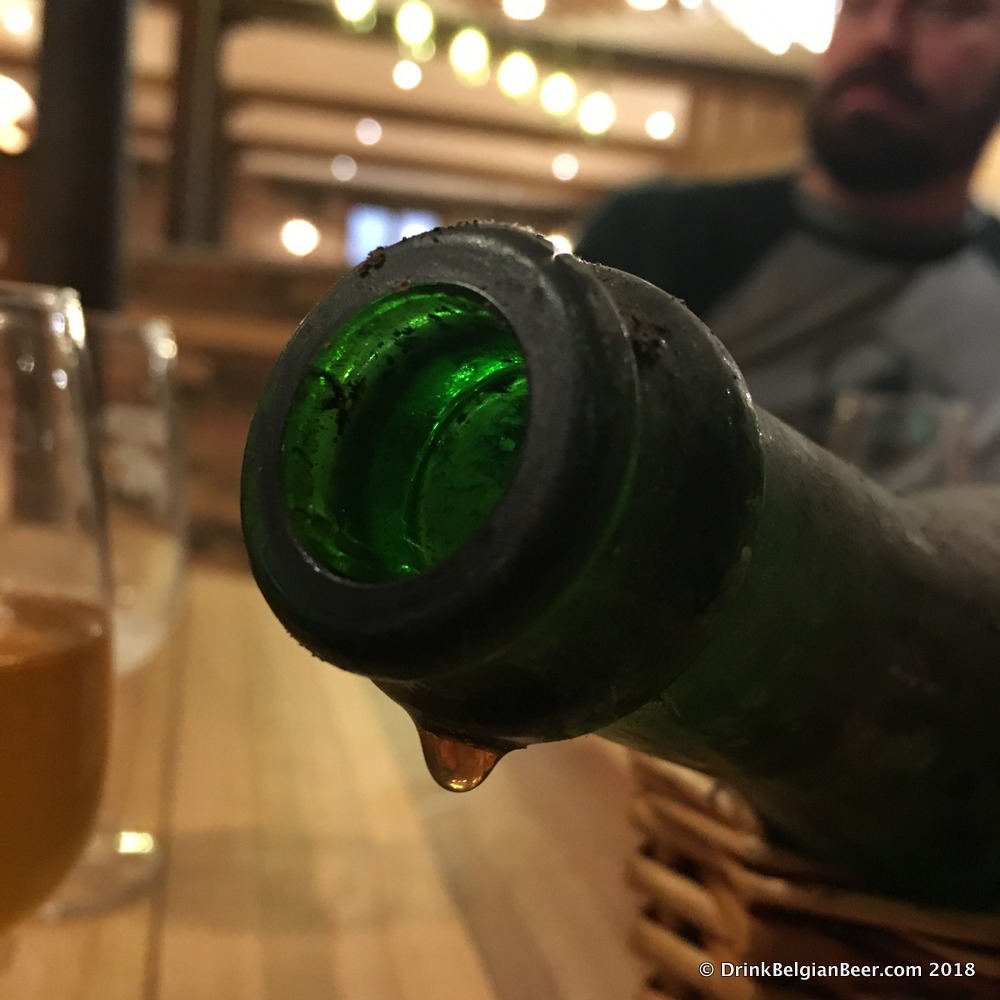 The Pure Kriek Cantillon 1996. One last drop of nectar remains… 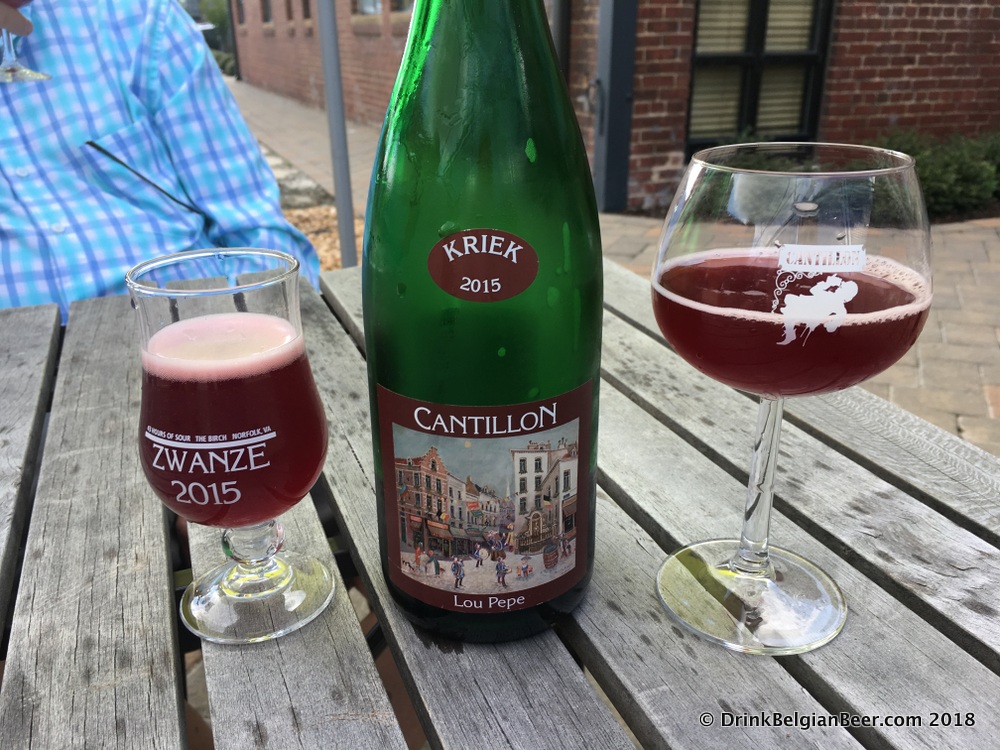 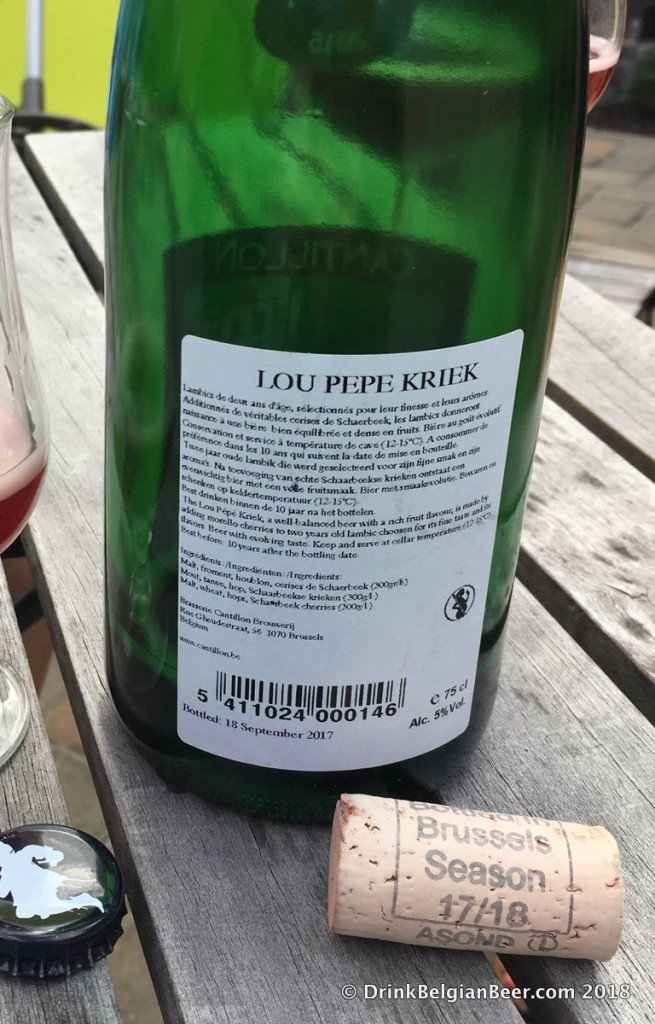 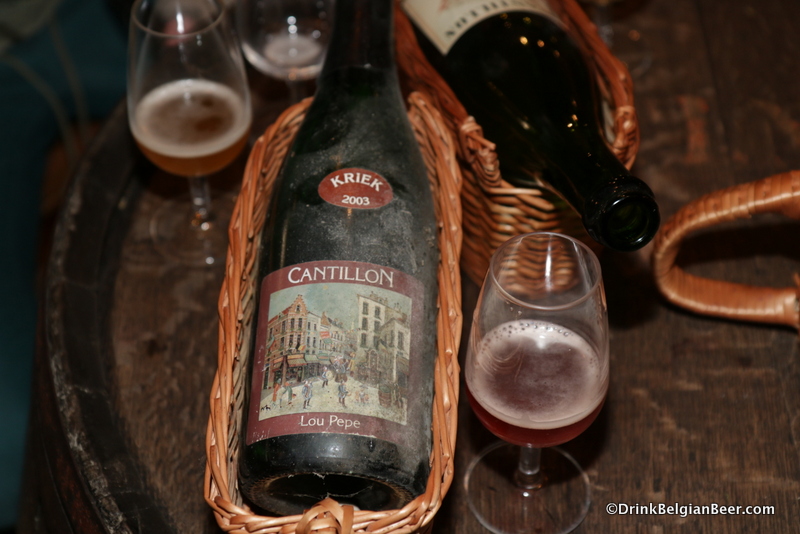 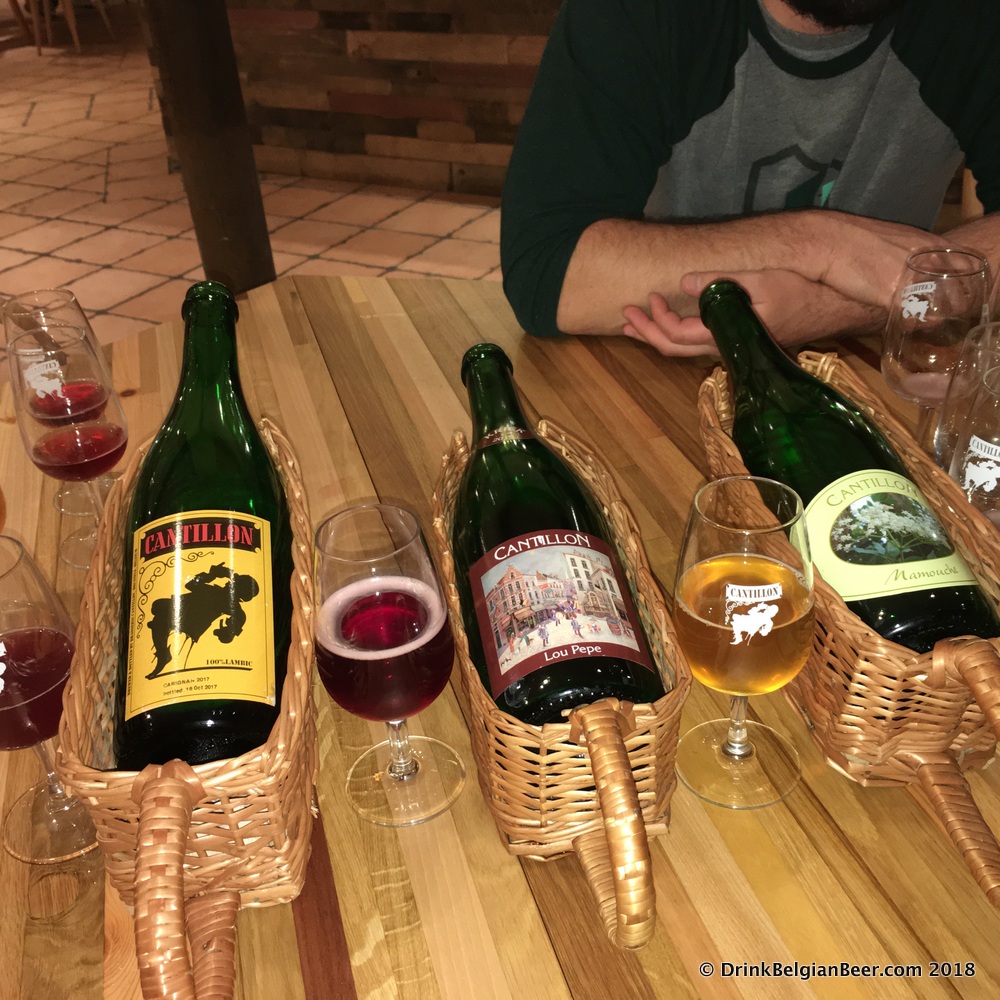 A 2015 Cantillon Lou Pepe Kriek (glass on left) along with a Carignan (left) and Mamouche (right.)

Lou Pepe Kriek was created in 1998, and the first bottling was in 2000. The 1998 date, as with other Cantillon bottles with a sticker date on them, refers to the year the lambic was put in barrels, not the year of bottling. This is in contrast to the Pure Kriek Cantillon 1996, which was bottled in 1996, but the lambic used was from 1994.

As I mentioned above, sourcing Schaerbeekse cherries used to me much easier 2 to 3 decades ago than the present, as there are fewer Schaerbeek (Schaarbeek in Dutch) cherry trees in Belgium at present. This is the main reason that there is such a small supply of Lou Pepe Kriek each year. However, there is good news on this front: many lambic breweries and blenderies, including Cantillon, have been planting Schaerbeek cherry trees recently. Note that it takes about three to five years for Schaerbeek trees to bear usable fruit. Many of you may already know that Cantillon is located in the city of Brussels, and there is no viable place in the environs of the brewery to plant cherry trees. However, there are still plenty of places just a few miles away that have land suitable for growing Schaerbeekse trees, and Cantillon planted a number of these trees on rural land earlier in 2018. Eventually, and hopefully, the supply of Lou Pepe Kriek may increase in the future. Another reason for the small supply is that Cantillon only produces about 2,550 to 2,600 hectoliters (about 2,200 U.S. barrels) of lambic per year, so there is only so much to go around to make all the Cantillon beers. 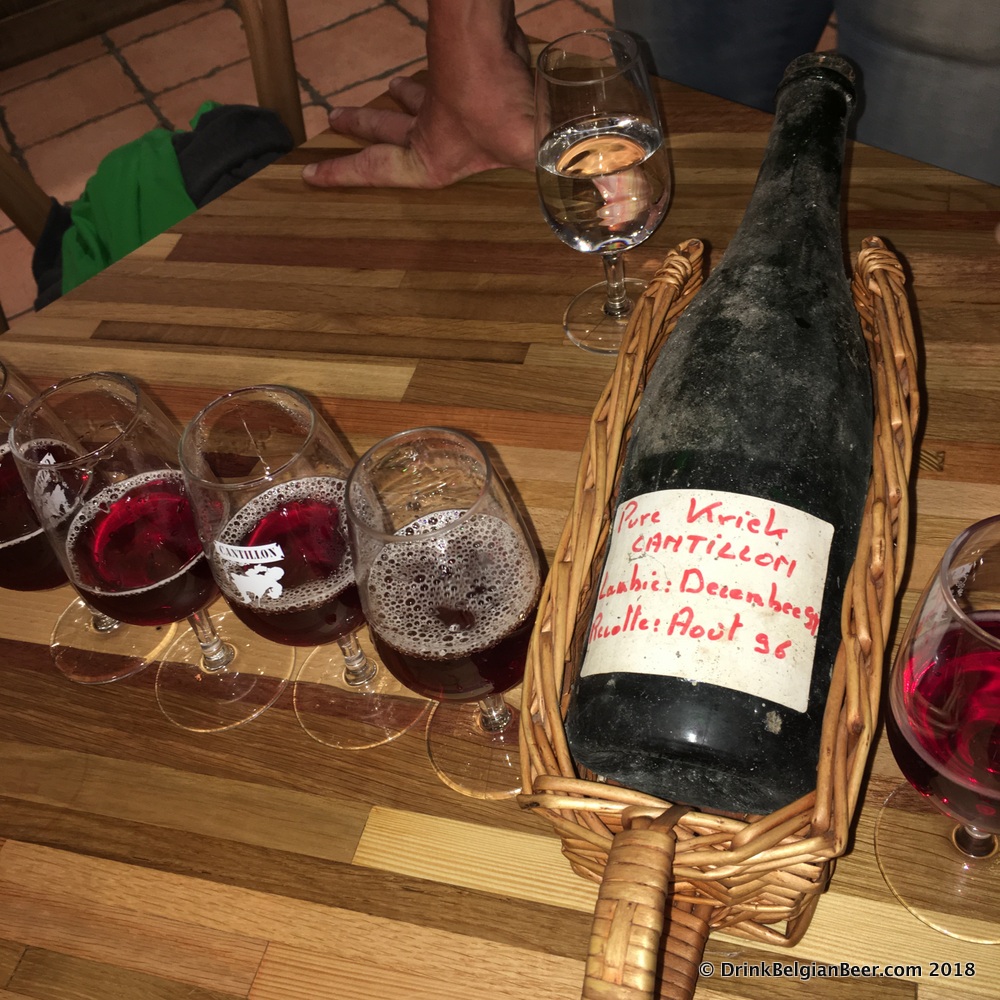 « In ’t Bierhuis Oud Beersel to reopen, new beers, and new bag in box lambics from Oud Beersel An interview with Pierre Tilquin, owner and master blender of Gueuzerie Tilquin »