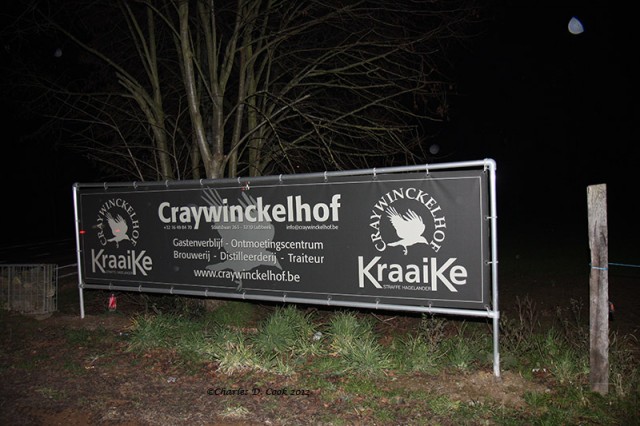 Louis Schrevens loves Scotch whisky. He also likes other types of distilled spirits, and beer. He’s building what would be a dream to many, a multi-purpose site where both beer and spirits will be born. It is located on the outskirts of Lubbeek, a little town near Leuven, in the Province of Flemish Brabant. “Brewery and Distillery Craywinckelhof” has been in the works for a few years.

I had the pleasure of visiting his operation in December 2012, and was surprised by what I found-and what a gem his place will likely be in the future.

“The farm and buildings here belonged to my wife’s family, and we own it now. It dates to 1858. There was a farm brewery here until the First World War. In 1916, the German Army took it away, and the family never restarted brewing again after the war. So I am doing so,” Louis told me.

“We renovated this space, which was a barn, in the last couple of years. My son Peter is a professionally trained chef, and in this feestzaal (festival hall) we cater to parties, wedding receptions, or any sort of get together where people want to rent a nice space, and have fine local cuisine, as well as spirits and beers from the region,” He added.

I’d say the hall could accommodate at least 100 people. The current beer selection is Gouden, Tripel Blond, Tripel Donker, Tripel Amber, Metteko, and Winter. The Gouden has 6% abv, and the Winter, 8.5%. All the rest clock in at 7.5%. All are currently brewed at De Proefbrouwerij. The brand name is Kraaike for all the beers and spirits.

“I do the test batches here on my 50-liter pilot brewery, which was built by an American while he was living in the Czech Republic a few years ago. It’s a nice little system, with a mash tun, cooking kettle, filter kettle, and two fermentation tanks,” Louis remarked. “Fermentation time is one to two weeks, and then the beer is bottled. After that, it goes into the warm-chamber for three weeks.”

The 50-liter pilot brewery is likely to see a lot of action in the coming years: “People will be able to come here and participate in brewing courses, and brew their own beer on this system. We will be ready to offer packages to individuals, couples, families, companies, all by appointment of course. They can later take home their beer once ready. Also, as you can see, we have a miniature pot still right next to the brewery. It’s a scaled-down version of one from Scotland, in a size of ten liters. People will be able to also take a course on distilling here, and will be able to taste what they have made just two hours after they start. We’ll have some activities for them during that time period,” Louis remarked.