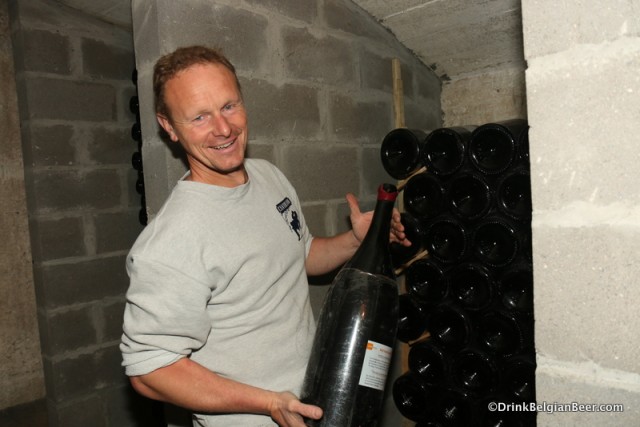 The much-beloved Brasserie Cantillon has a new long-term storage project where tens of thousands of bottles of lambic, Oude Gueuze, and other beers will be stored for up to thirty years. I had the great pleasure of visiting the “Bomb Shelter Beer Cellar” with Cantillon brewmaster Jean Van Roy on Thursday, April 24. 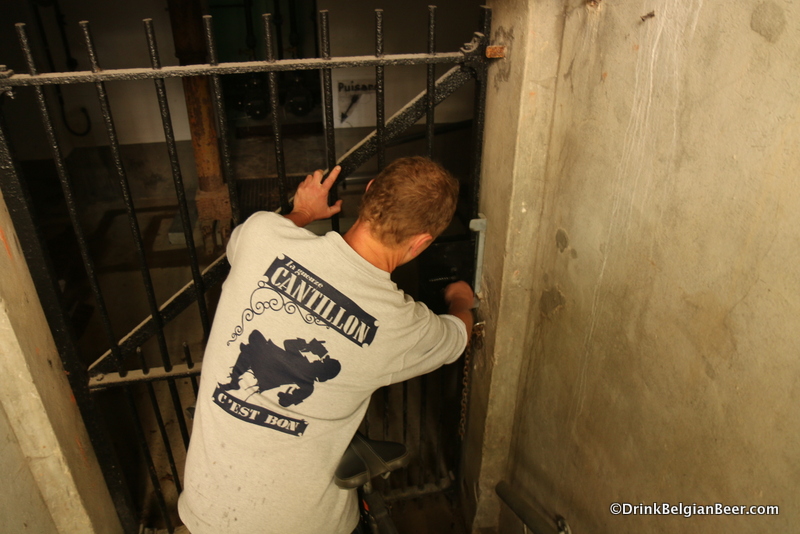 Jean told me, as we entered the cellar: “I had the idea to have an aging/maturation project like this when I visited the Pommery Champagne house in Reims a few years ago. They have great cellars full of many thousands of bottles of champagne, aging in beautiful conditions. I wanted to do something like that with Cantillon, but we don’t have the space at the brewery for such a project. So I thought to ask the city of Brussels if they wanted to collaborate on such a project, and they quickly agreed, as they liked the idea.”

To watch a short video of the above conversation, see here 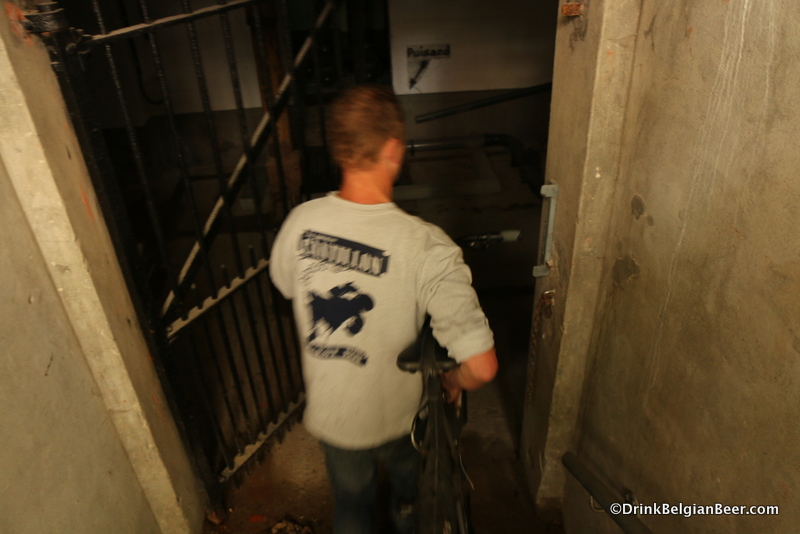 The mayor of Brussels, Freddy Thielemans, and two aldermen, Philippe Close and Christian Ceux, were then asked to find a space where Cantillon could age beer.

He continued: “We visited several locations, and settled on this one. It’s a fine location for a cellar, and we also have some family history associated with this area. My great grandfather, Paul Cantillon, who founded the brewery in 1900, married Marie Troch. Her father, René Troch, had either a beer storage space or maybe a brewery just in front of where this cellar stands now. Of course, those buildings are long gone now, but I have come back to a place where my great-great grandfather worked with beer. It makes this location even more special,” Jean remarked.

To see a video clip of Jean discussing this, see here

Apologies for the quality of the videos shown in this article. I don’t have an external light source for my camera, other than its photo flash. At the moment, at least. 🙂 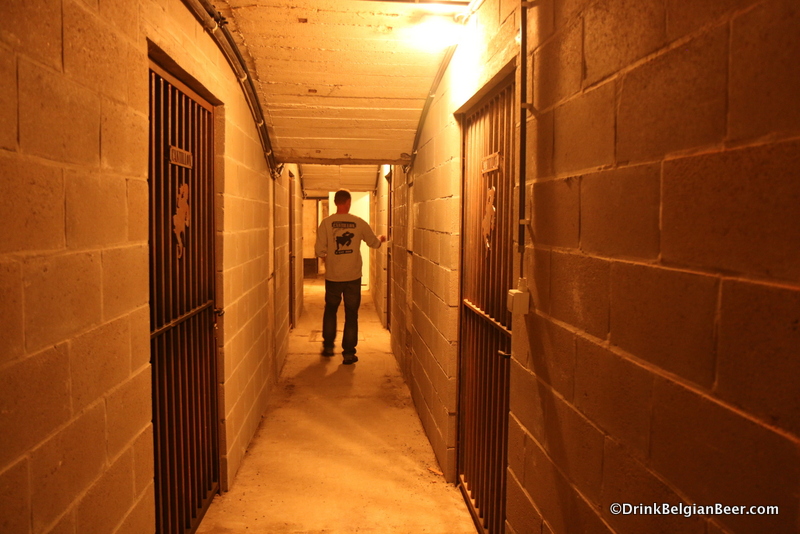 One of the hallways in Cantillon’s Bomb Shelter Cellar.

“We have a thirty year lease from the city, for free. It’s a very good situation,” Jean commented during the tour.

“This is the old basin of the Senne, transformed into cellars at the time of ‘vaulting’ and the diversion of the water away from Brussels. These cellars were then converted into bomb shelters. The place itself is already steeped in history and is ideal for the creation and preservation of our heritage,” said mayor Freddy Thielemans at a 2011 press conference. 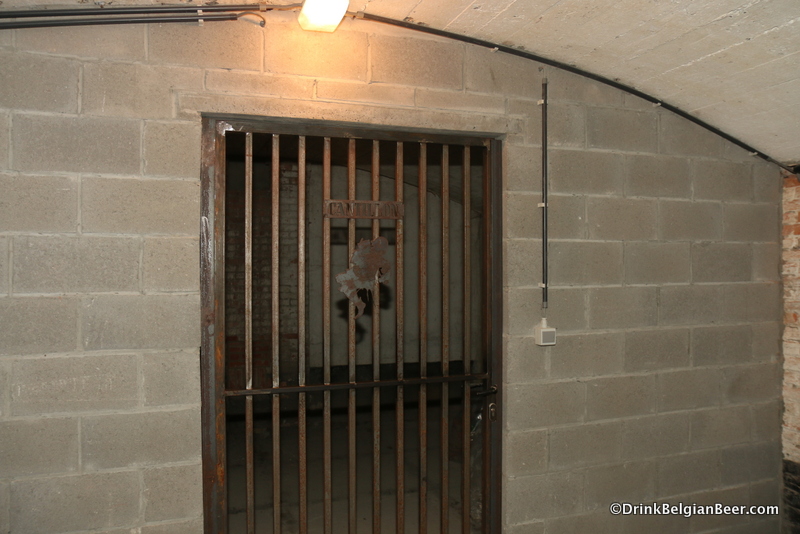 Each room is well protected by a locked gate.

Just a bit of background from Jean: “Brussels used to be a sizeable port city, and now there still is an active port here. The river Senne (Note: Zenne in Dutch) used to flow through Brussels, but the water was diverted, and major boulevards built on top of it, in the late 19th and early 20th centuries. Here, I think the harbor that existed was linked with the Canal de Willebroek, and not directly with the Senne. But, these underground spaces became available for other uses when the water was diverted.” 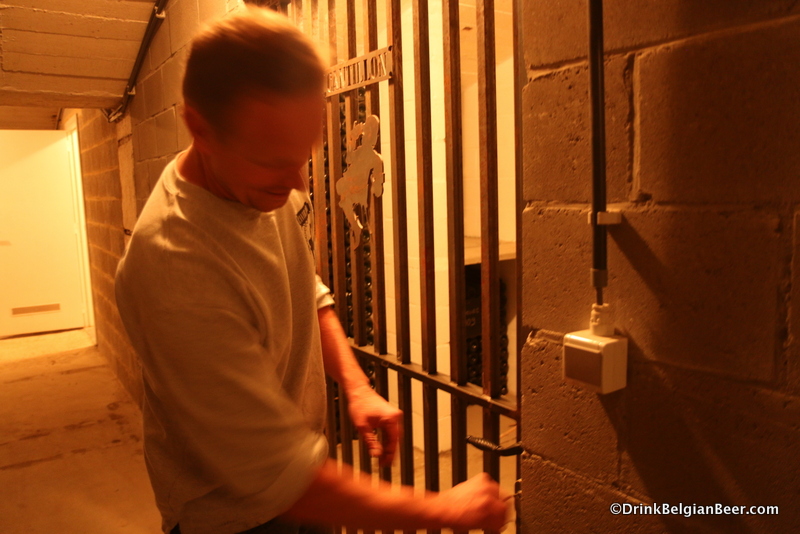 Jean Van Roy unlocking a gate so we can check out the goodies inside.

Just where is this “new” cellar, you ask? It’s an old bomb/war shelter, probably dating to the 1930’s, located on the Hooikaai, near the Yser metro stop and Leopold Tunnel in central Brussels. A park with a fountain is the locale above where the spontaneously fermented treasure rests below. 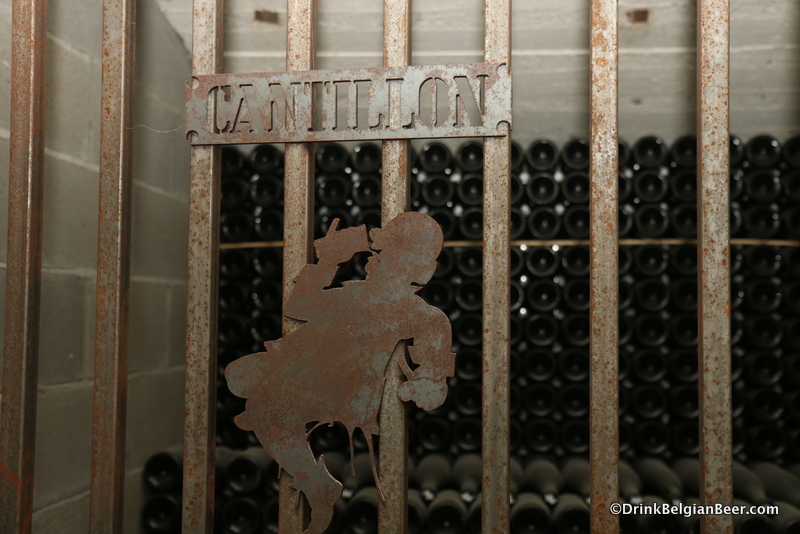 Each gate has the Cantillon name and emblem of the brewery attached to it.

There are seven rooms, each with a locking iron gate with the Cantillon emblem anchored in them. “We had an iron-worker make these, and it didn’t cost too much more to add the symbol of our brewery to each. It was a nice added touch that we are proud of,” Jean stated, smiling. 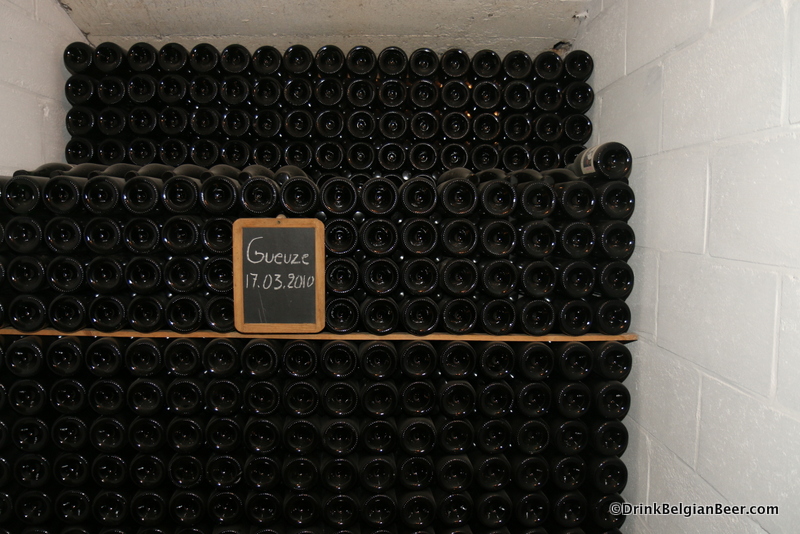 “Which beers will you age here?” I asked Jean. He then went into the details: “Primarily, this project is about lambic and gueuze, to see how it will age as a research project. At the moment, we have Bruocsella Grand Cru, Gueuze, and High Density Lambic here (Lambic de Haute Densité.)” 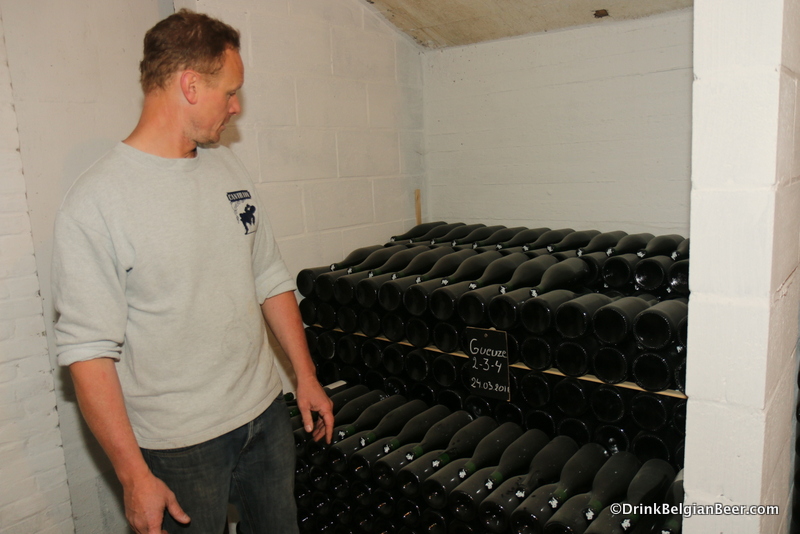 The gueuze is not just any old gueuze, though: “The average age of the gueuze we have here is 40 months. It is a blend of 2, 3, and 4 year old lambics. For our Classic blend, the average age is 20 to 24 months. So this Gueuze is twice as old than the Classic,” Jean told me. 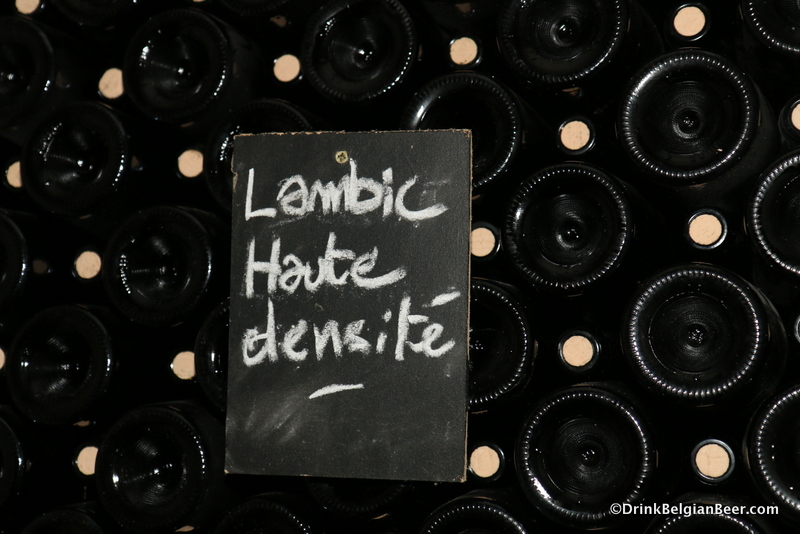 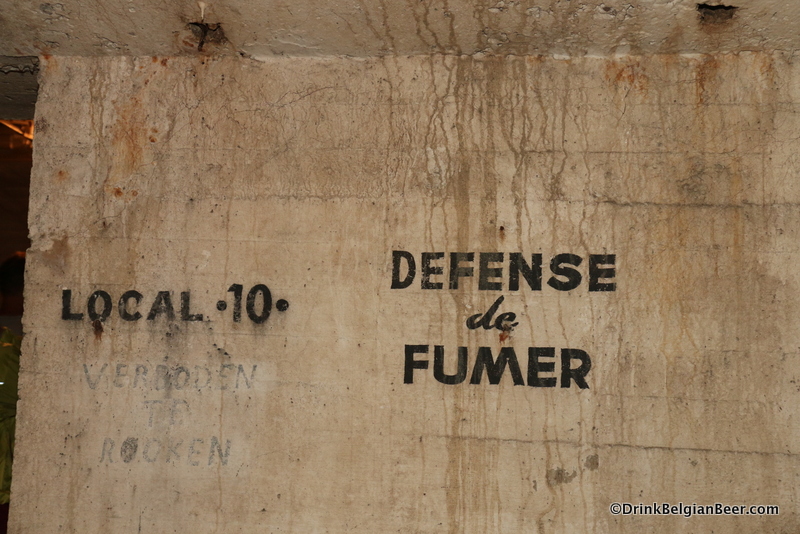 No smoking, in French. 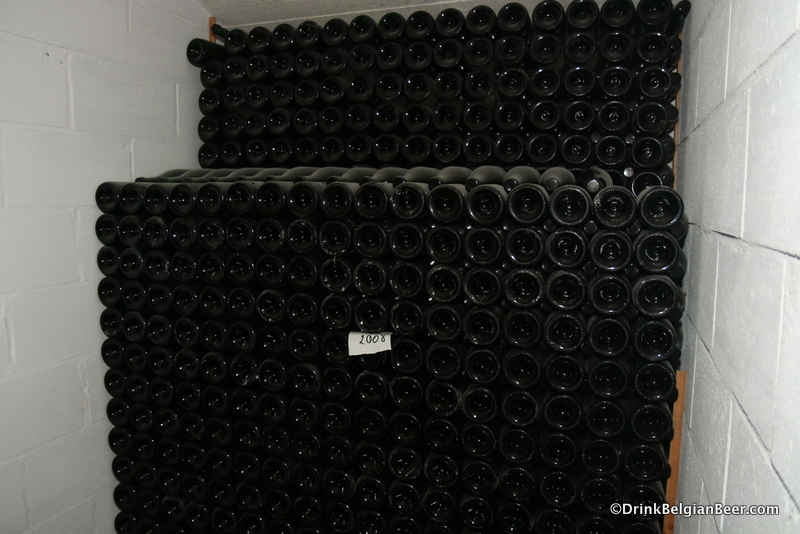 “I really began aging some beers the year my son Florian was born, in 1996,” Jean stated. “And I want to increase the amount we have aging by a lot, which we are doing in the new cellar.” 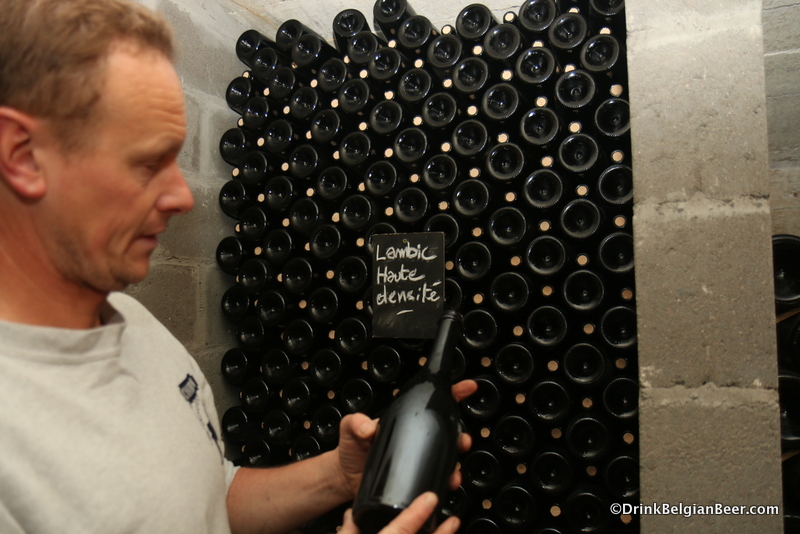 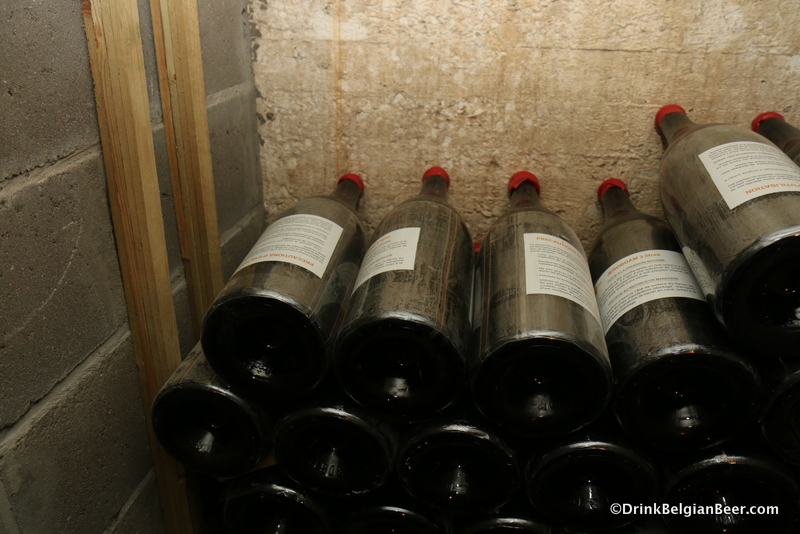 Three liter Jeroboams of High-Density Lambic. This would make for a great tasting event. 🙂 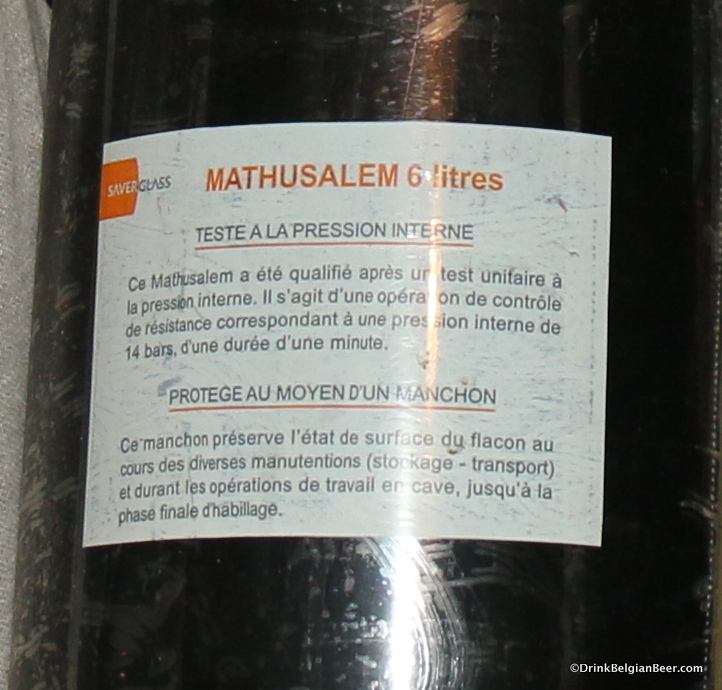 The front label of a six-liter bottle of High-Density Lambic.

“We also would like to put some beers with a high-fruit concentration here, such as Lou Pepe Kriek. But we don’t have any here yet, as the last two cherry harvests were not very good in Belgium. We use North cherries (note: Noorderkrieken in Dutch) which are grown in Belgium. I hope that this year’s harvest will be better, as we have had warm weather even in March, and lots of sunshine so far this spring,” Jean told me, smiling. 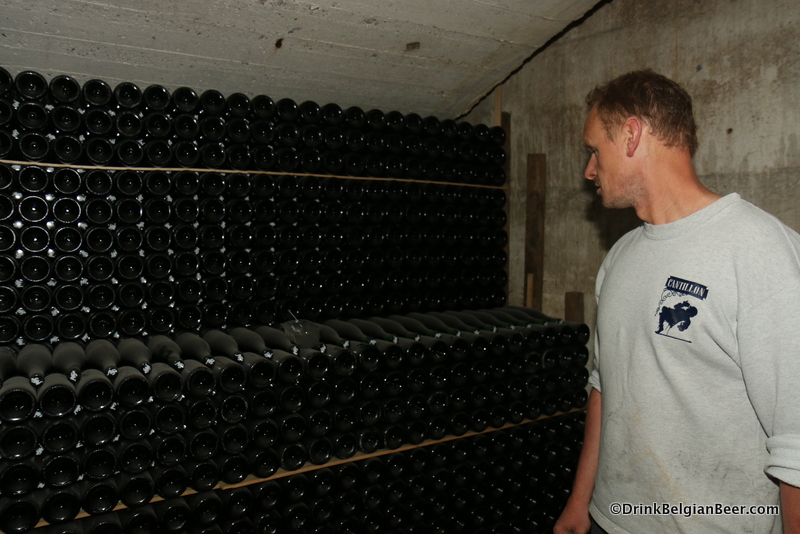 Jean Van Roy with thousands of bottles of gueuze. Anyone have a corkscrew?

Will the general public ever be able to visit this cellar? “So far, there have only been about twenty or thirty people that have visited here. That’s not because we want to keep it a secret, but really, it’s a time issue for me. We are very busy at the brewery all the time, and so don’t have time to give visits here. But, the good news is that the city is considering organizing some events here. Maybe parties, receptions, and the like. Probably some barrels we be put here, with Cantillon glasses of course, so gueuze tastings can be done during these events,” Jean commented. 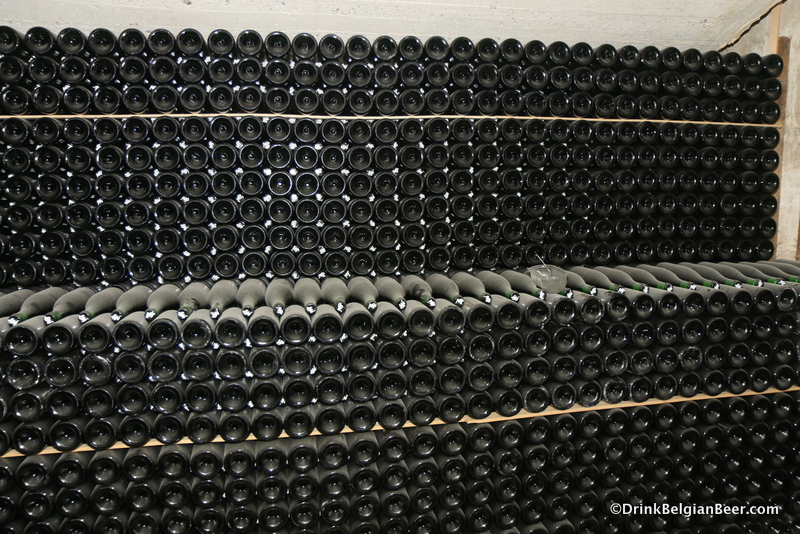 While these cellars are not as big as the great hall at Rodenbach, where wedding receptions are often held, I could envision beer lovers possibly being able to hold a wedding reception there, if the city does begin organizing such events.

Jean then added his philosophy of the project: “I don’t do this for me, or for Cantillon.  I do it for the beer, for lambic, which I think is the most beautiful thing in the world. “

To see a short video of Jean discussing the philosophy of the long-term aging project, see here

See below for more photos of the Bomb Shelter Beer Cellar. 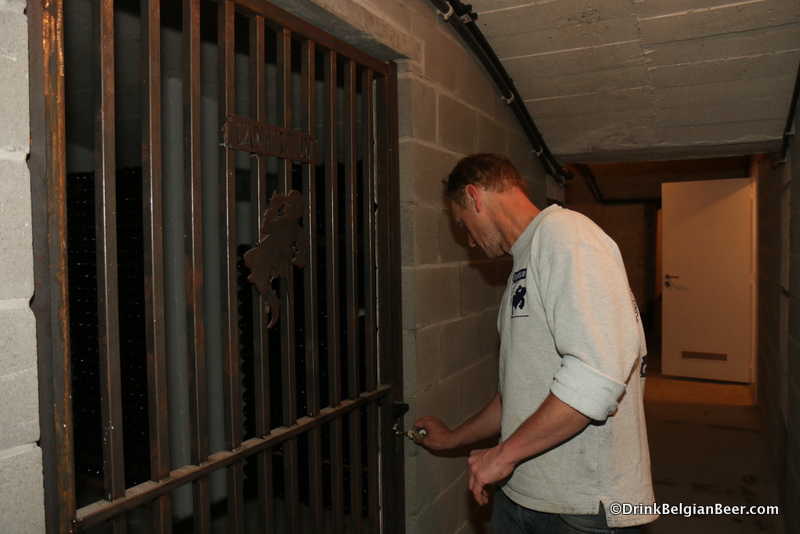 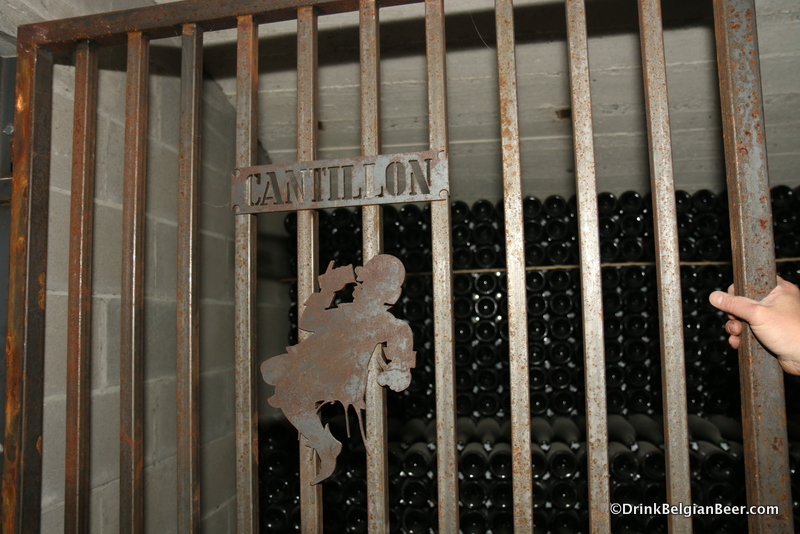 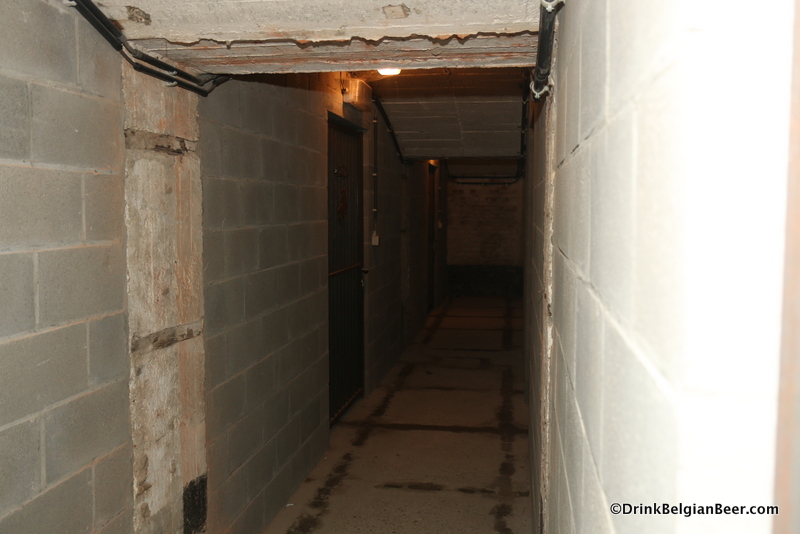 Another hallway in the cellar. 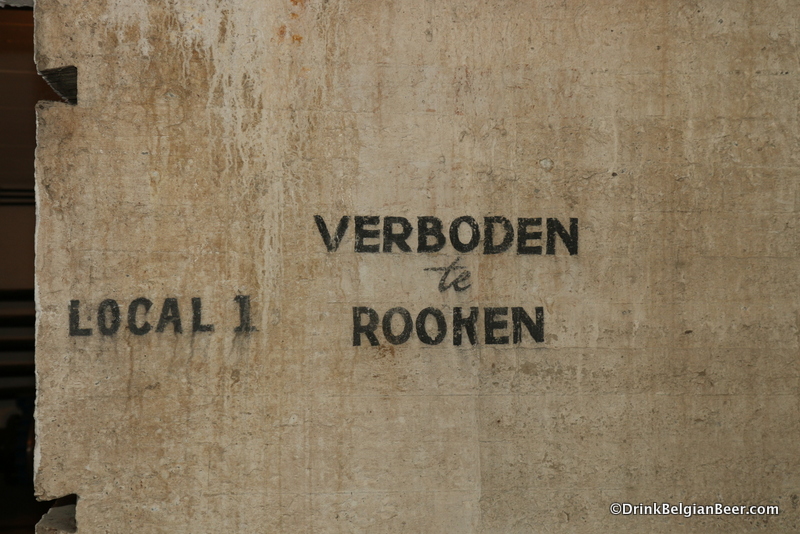 No smoking, in Dutch 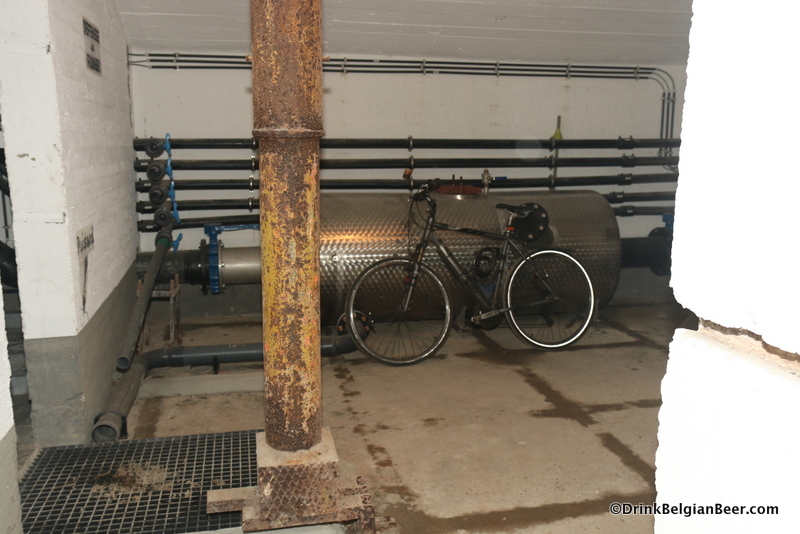 Entrance hallway of the cellar. 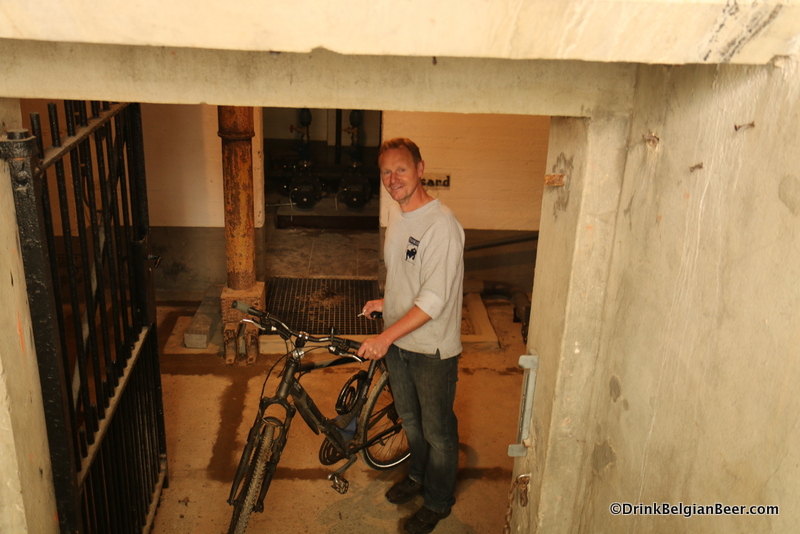 Looking down from the stairs leading into the Bomb Shelter Beer Cellar.