Julia de Ridder and François Rimaux had only one child, Nelly Rimaux. As she had no interest in taking over the farm and brewery, François Rimaux began to look for a buyer after the guns of World War I fell silent.

On April 6, 1920, Alfred Dupont purchased the little farm and brewery as a gift for his son, Louis. The sale included ten cafes and a plot of land. This was no birthday present; it was Alfred’s attempt to dissuade his son from immigrating to Canada. Alfred and his wife, Marie-Thérèse, would stop at nothing to convince Louis to remain in Belgium. Happily for beer lovers, it worked!

Louis was trained as an agricultural engineer, and the appeal of running his own farm and brewery must have been quite high. François Rimaux remained at the brewery for six months after its purchase by the Dupont family, and in this time trained Louis Dupont in the brewing process. He continued to run the brewery as well.

During his tenure as brewmaster/owner, Louis Dupont brewed a couple of beers. Possibly there were others, though we don’t know for sure, as detailed records were not kept at the time. The first, Bière de Ménage, was a sort of basic daily beer, which probably had a fairly low alcohol content. Saison Dupont was the other product. In those days, it weighed in at just 3% abv. Beers with lower alcohol contents were the norm then. 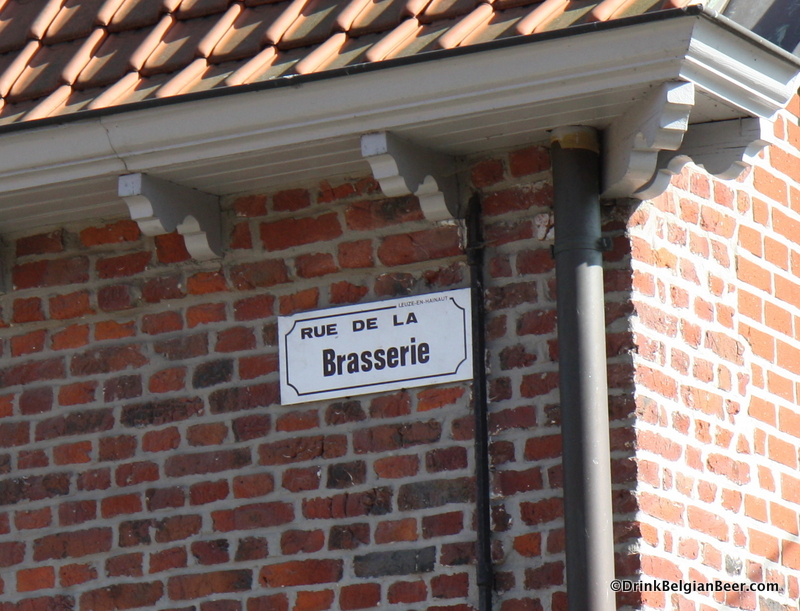 “Brewery Street” is a good place to be!

Louis Dupont purchased barley from local farmers and malted it on site. The process was very hands-on and time consuming, as was much of the brewing process in those days. Brasserie Dupont continued to malt its own barley until a fire in 1988, after which they purchased malted barley from other suppliers.

A baudelot is a heat exchanger/cooling device that used to be in common usage at Belgian breweries until the 1950’s and 1960’s. You can see examples at brewery museums such as Brouwerij Het Anker, Brouwerij Liefmans, and Brouwerij Timmermans. The only time I have ever seen one in use was at Brouwerij Contreras, in Gavere-Asper, East Flanders, in 2008. It was a sight to see!

Dupont’s beers were fermented in wooden barrels. The sizes used were 140 and 600 liters, which is roughly 37 and 158 U.S. gallons, respectively. Casks were also sold to bars and private individuals, in 35, 70 and 100-liter sizes. Dupont’s brews were delivered to customers by horse-pulled carts until after World War II. The brewery did not own a truck until 1951; by 1958, it had four.

Louis Dupont, whose marriage produced no children, turned over the running of the brewery to his nephew, Sylva Rosier, in 1945. Sylva was a brewing engineer, educated in Ghent. While Sylva managed Brasserie Dupont, he primarily worked at the Zeeberg brewery in Aalst, East Flanders, where he became an expert in brewing lagers. It was Sylva that introduced the brewing of bottom-fermented beers (lagers) to Brasserie Dupont, and also modernized the brewery. But he never wavered in his support of the brewery’s top-fermenting special ales, as he knew Dupont would not have existed without them.