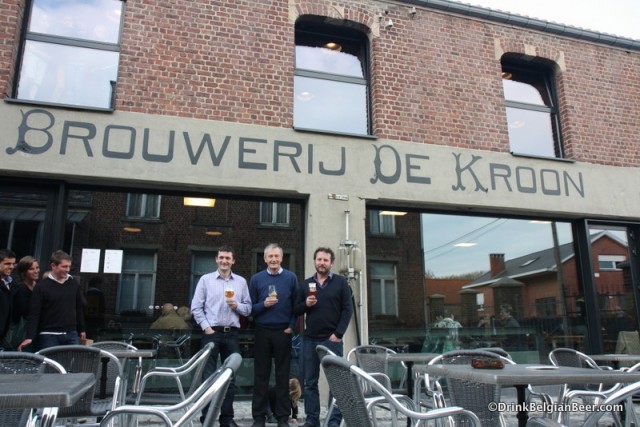 Brouwerij De Kroon was classified by the Belgian government as a monument in 2003, and the old part of the brewery is therefore a protected site. 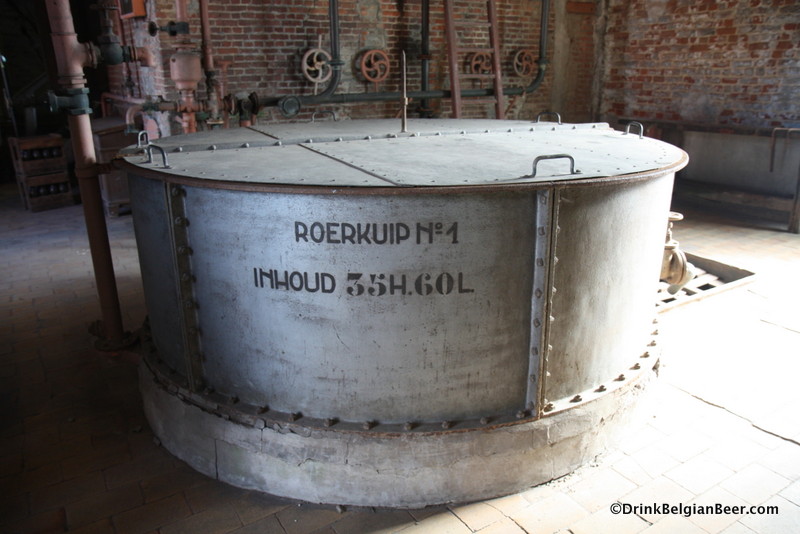 The old brewhouse was renovated over the winter, and is now a museum. The last owner’s grandson still lives on site, and conducts tours of the old brewery. In the future, look for a couple of 1955 Opel Blitz beer delivery trucks to add to the museum experience. Very cool, it shall be!

During my second visit on Sunday, April 28th, Dr. Freddy Delvaux commented: “This is a 5-hectoliter (about 4 U.S. barrel) Italian built Alfa Laval system, where we will make many experimental beers. It is fully automated, so we can do as many as three or four batches a day if we want.” He continued: “We serve these beers in the brewpub across the courtyard. We have piping running under the brewery to the brewpub.” 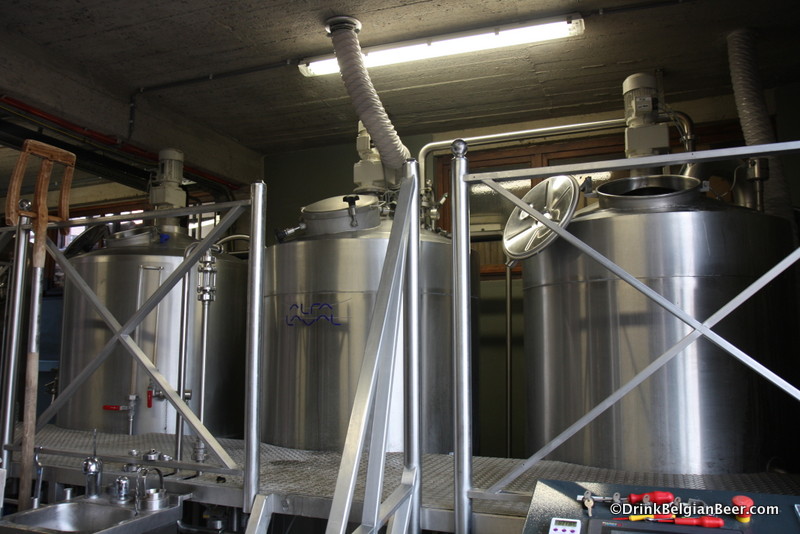 “Then,” he continued, “We had a family and friends day on Saturday, April 20, and 700 people attended. Because of it, we are in fact nearly out of our three house beers now. But we will make more, of course!”

The new Brouwerij De Kroon opened to the public on Tuesday, April 23. “We have sold a lot of beer this week,” Freddy remarked. “Business is good. We have had a great start.”

Filip told me: “We haven’t yet decided how many taps we will have in the brewpub. But there won’t be too many, as we want to make sure all the beer served here is fresh. At first, all our beers will be exclusively served on site. Down the road sometime, maybe we will offer special cafes some of our beers. But that is something we will decide in the future.” 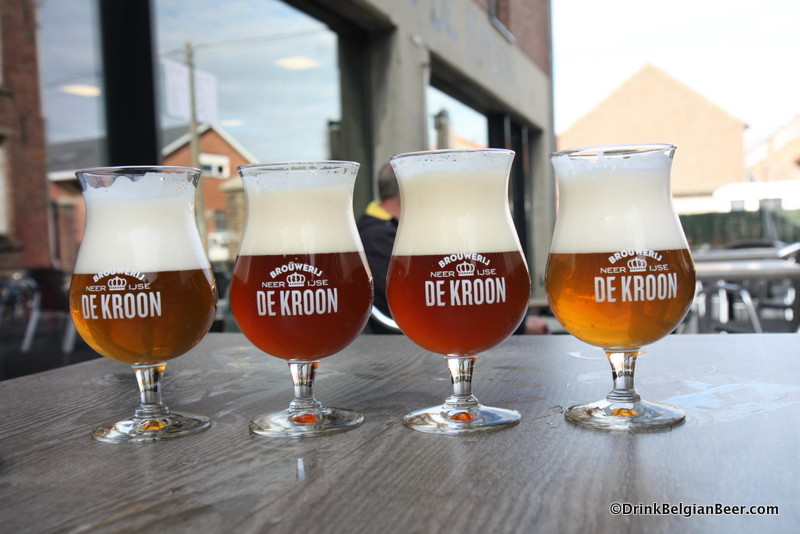 Brouwerij De Kroon beers in the courtyard of the brewery.

“We additionally have some recipes from the old De Kroon brewery, and we will recreate some of them in our new brewery,” Filip commented, smiling. “The first one, on tap now, is Super Kroon. This brew is in fact based on the ‘Super Kroon Pale Ale’ that used to be brewed here. It is amberish colored brew of 6.5% abv, which is party dry-hopped, and has a fine bitter flavor and after taste.”

The second brew in the lineup is Delvaux, a strong blond ale created by Filip that hides it 8.5% alcohol very well. It is very floral, with fruity notes, and deceptively easy-drinking. 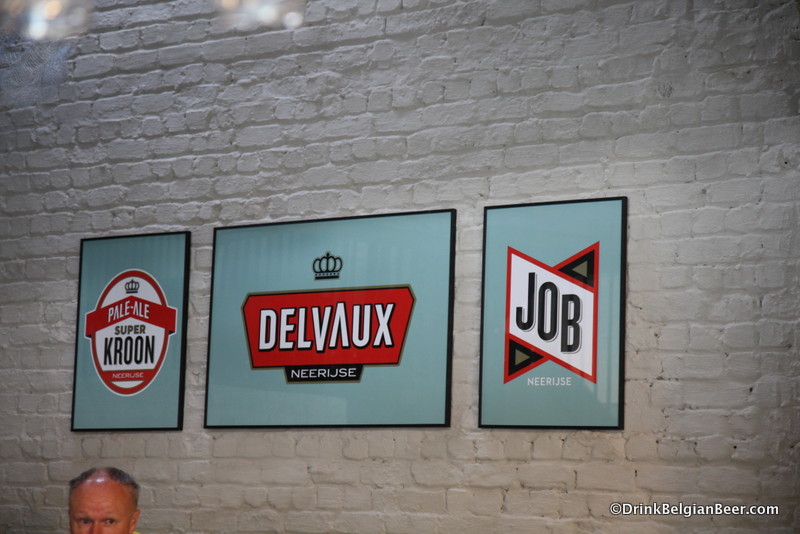 The third brew in the trio is called Job, but it has nothing to do with the English word. “My nickname,” Freddy told us, sitting outside on the sunny but chilly April day, “Is Job. But, it’s really a play on words based on the composer Frederic Chopin.” The Job beer is an unfiltered blond brew with fruity aromas, a slight spiciness from the yeast, and 6% abv.

Yeast and balance are the watchword at Delvaux and De Kroon. “We have over 300 different yeast strains in our yeast bank here,” Filip stated. 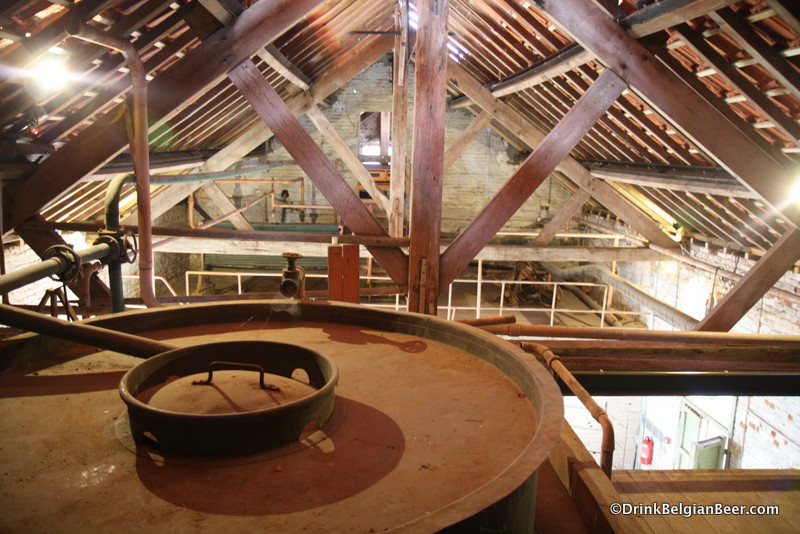 The top floor of the old museum brewery. An old brewkettle is in the foreground.

“We also have guest beers (in bottled form) from the breweries that we consult for,” Freddy remarked. Some of the experimental brews may end up being new beers at breweries that enlist the Delvaux’s services.