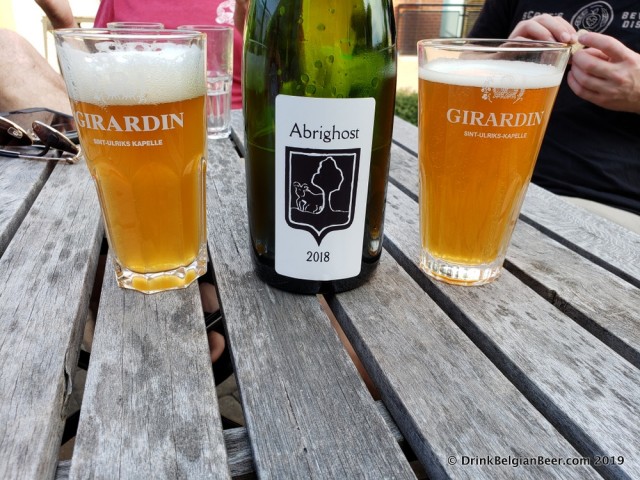 Raf Souvereyns, aka Raf Soef for short, is one of the most highly-regarded small lambic producers on the planet now. His “Bokke” lambic blendery, located in an industrial area on the outskirts of Hasselt, Belgium, has only been open for a few years, yet Raf is crafting some of the most sought after lambics in the world. If you don’t recognize “Bokke” it’s probably because the lambic blendery started life as “Bokkereyder,” and that name had to be changed in 2018 due to a trademark issue.

(Note that due to the goat themed logo of the blendery, Bokke was sometimes called “Methode Goat” as a joke and second name after the trademark issues. So, you will hear some references to “Methode Goat” in the videos below.) 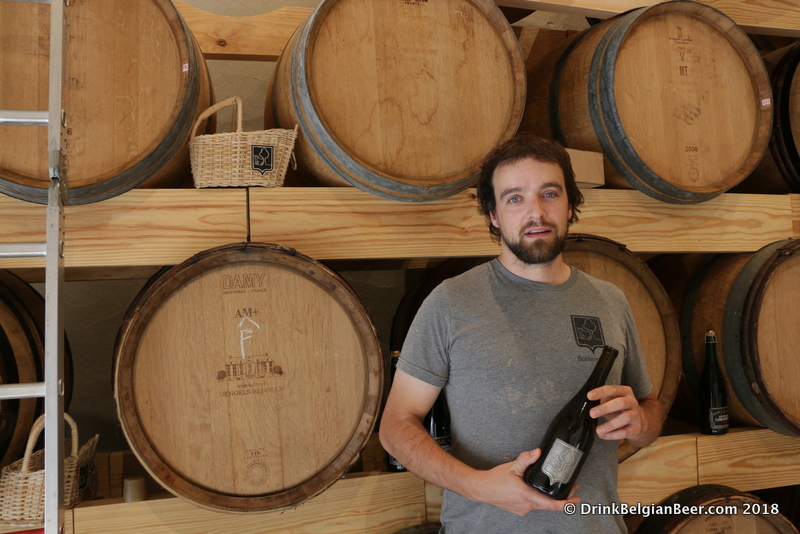 Raf Souvereyns, aka Raf Soef, in his Bokke lambic blendery in Hasselt.

No matter the name, Raf continues to crank out world class lambics every year, even if on a minuscule scale. Bokke produces less than 100 hectoliters (85 U.S. barrels) per year, and its not a blendery that is likely to see any kind of rapid expansion. Raf is methodical, and would prefer to grow at a slow and steady rate.

Bokke’s location near Hasselt, the largest city in Belgium’s fruit-growing region, Limburg Province, makes it an ideal place for someone producing lots of fruited lambics. While the blendery (stekerij in Dutch) is located about an hour and a half from Belgium’s lambic country, to the south and west of Brussels, the lambic produced here is on par with the other lambic makers. It should be, as Raf uses wort from Brouwerij Girardin, Brouwerij De Troch, and Brouwerij Lindemans in all of his blends. He also sometimes uses lambic from Brouwerij Den Herberg in Buizingen, which has been producing lambic for a few years now, and that should be releasing a geuze sometime in the not too distant future. (Den Herberg also makes some really good whiskey. But that is another story.) 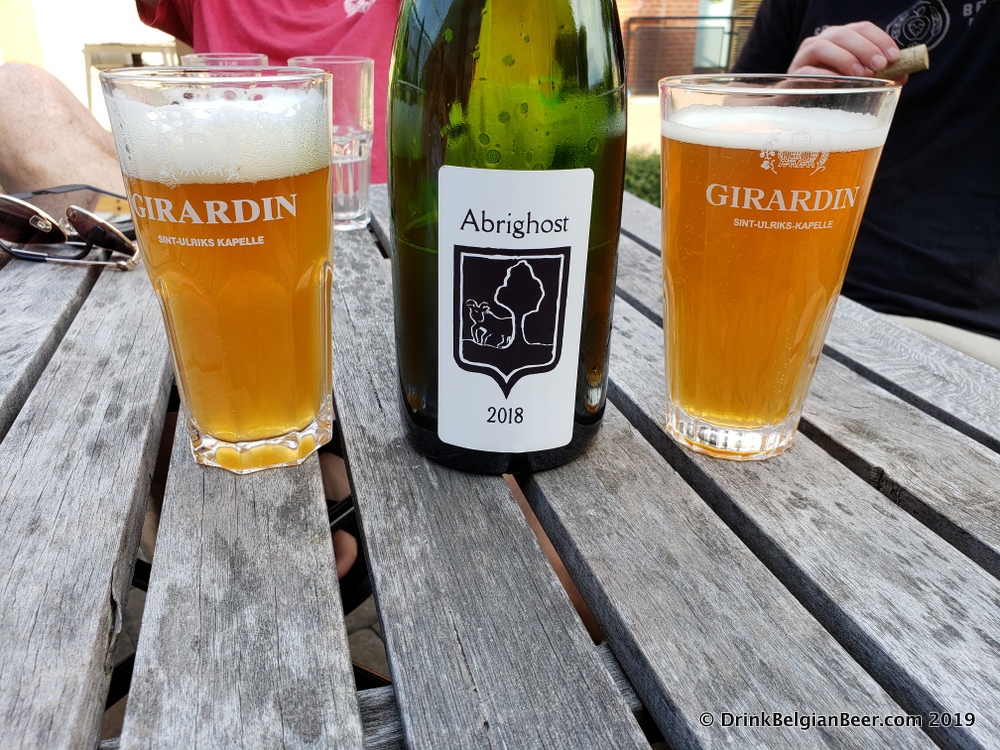 Raf purchases wort that comes directly from the coolships at Girardin, De Troch, and Lindemans, the day after a brew day, after it has cooled overnight in their shallow, rectangular-shaped vessels. He then drives the wort in large plastic vessels to Hasselt, and pumps it into his own barrels. Speaking of barrels, Raf again is well located in Hasselt, as Belgium’s primary wine-growing region is also Limburg Province. “I studied wine-making for several years, and incorporate many wine-making techniques into my lambic-making,” Raf remarked during one of my visits to the blendery. “Luckily, I know most of the local wine-makers, and have access to buy some of their used barrels. One in particular is Wijnkasteel Genoels-Elderen in Riemst, between Tongeren, the oldest town in Belgium, and the Dutch city of Maastricht. I have some great barrels from them,” Raf added. 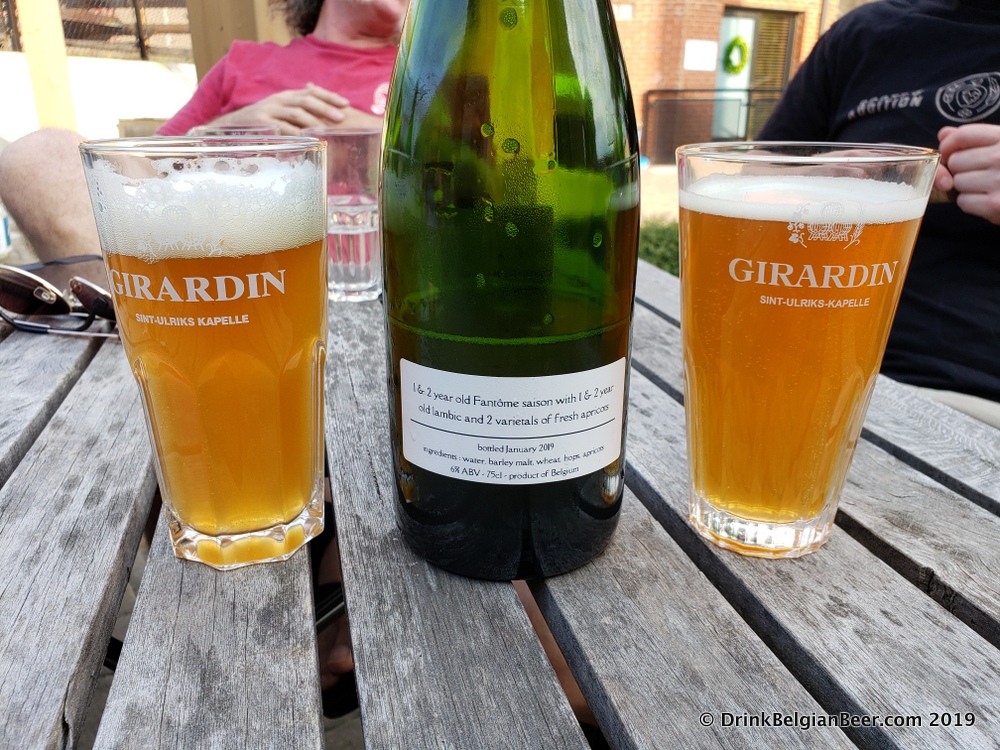 The back label of Bokke Abrighost 2018.

Abrighost 2018 is a blend of one and two year old Fantôme Saison, blended with one and two year old lambics, and macerated with two varietals of fresh apricots. How did this brew come about? I asked Raf, and he replied: “Well, it started in 2016 when I made Zomersaison for the first time. Fantome and lambic are a match made in heaven. The phenolic and ester qualities of saison go so well with the dryness and acidity of lambic. Zomersaison 2016 was a saison/lambic blend that was aged in two barrels, one that previously held peach lambic, and the other that previously contained apricot lambic. So, no fruit was added to this blend, just the barrel that gave back some of the character of what was in there before. So when a Fantome saison is fermented together with lambic, due to the dryness and the acidity of the beer, the estery and phenolic characters of Dany’s beer are increased. By aging the beer in stone fruit barrels, the stone fruit esters get an extra boost of fruitiness. While making that beer, it was my dream to make an apricot saison. Sadly, I couldn’t get the right quality of apricots that year, so it didn’t happen. 2017 wasn’t a good year for apricots either, so in 2018 I was finally able to make the apricot saison, which is now called Abrighost 2018.” 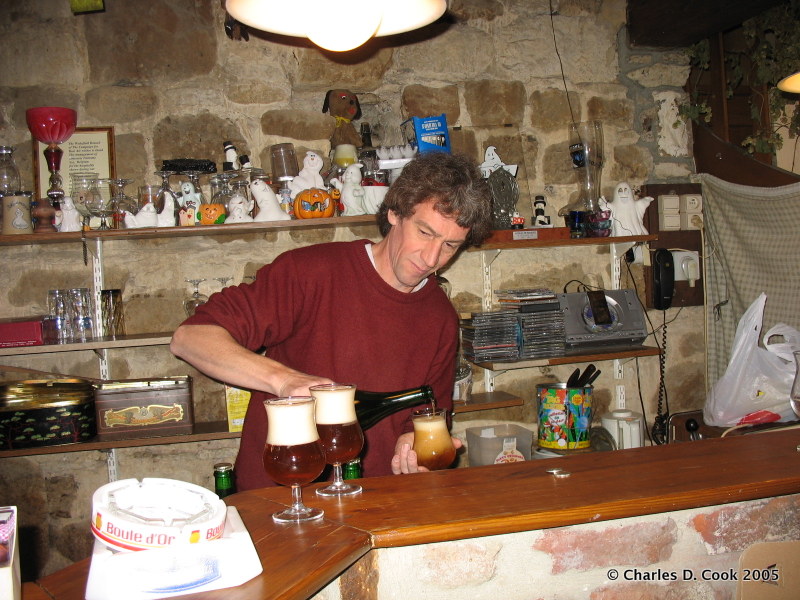 Dany Prignon pouring one of his Fantome Saisons, circa 2005.

Dany Prignon is the owner and brewer of the Brasserie Fantome beers.

When I tasted Abrighost 2018 with local friends on July 26, it had a mild apricot aroma in the nose, while the Fantome Saison aroma was more prevalent. The apricots really shine in the taste, which has a medium funk and low/moderate acidity, a medium body and medium carbonation. I felt it had improved/matured since I first tasted it at the blendery with Raf in late April; the apricots and stone fruit character in the taste were more pronounced, while the saison was a bit more dominant with the first bottle in the spring. This beer is superb, and probably not near its peak. I would bet that it will continue to mature for at least another year or two. 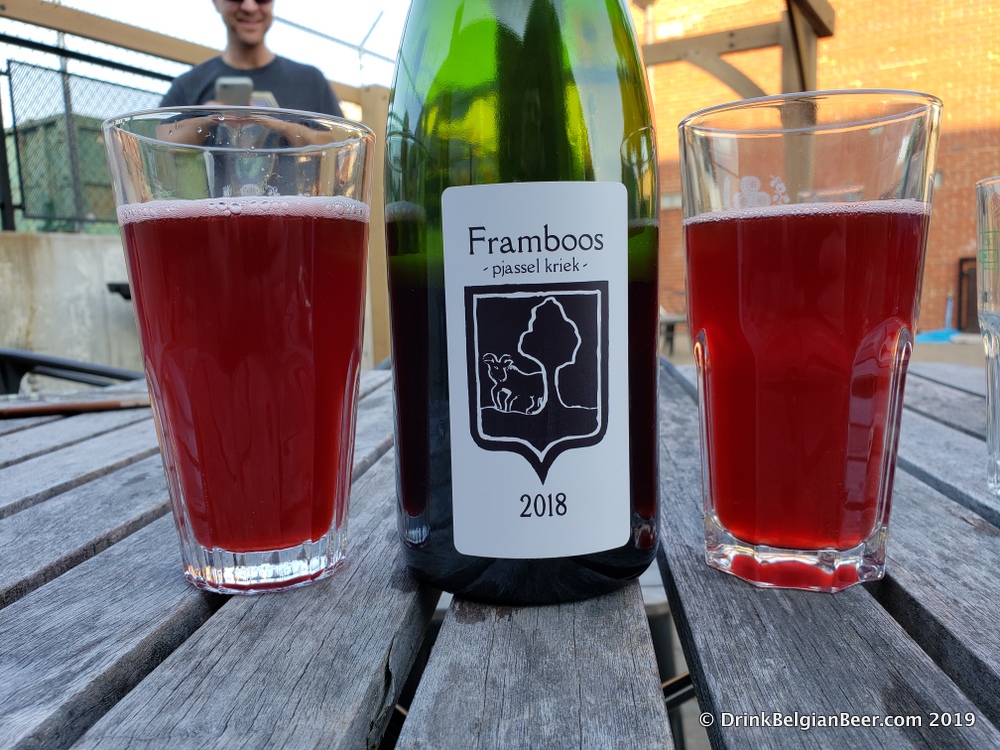 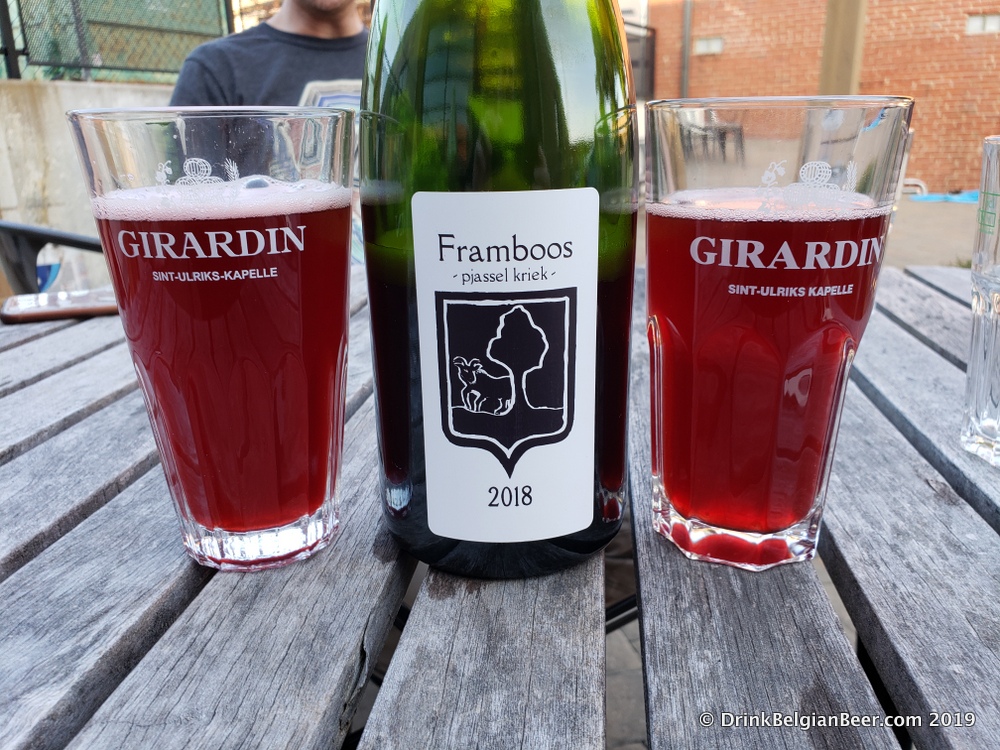 Two weeks later, I cracked open a Framboos Pjassel Kriek 2018 with old friends. One of whom makes some excellent sour homebrews. The Framboos Pjassel Kriek is made with 1, 2, and 3 year old lambic, with fresh raspberries, vineyard peaches, and Gorsem sour cherries. Gorsem is a town in Belgium near St. Truiden in Raf’s home province, Limburg. The cherries grown there are similar to the famous Schaarbeek variety, grown in the environs of Brussels.

This description is from Raf: “This blend is made up of 3 different summer fruits: the raspberry lambic is made of 1 and 2 year old lambic which macerated on 3 varieties of raspberries sourced from local farms, harvested in July 2018; the Pjassel was made with 1, 2 and 3 year old lambic aged on red vineyard peaches harvested in September 2018; and the kriek was made by macerating Gorsem sour cherries for 18 months in a barrel, harvest of July 2017.”

Raf added: “In the last 4 years, I have made several experiments involving a blend of these 3 different fruits, and finally I created a blend which I think reaches an equilibrium of freshness and depth. The deep dark character of the cherries carries the bright acidity of the raspberries, and the aroma of that blend are uplifted by the floral and smooth fruity character of the peaches … without any of the three fruits dominating the blend.”

The Framboos Pjassel Kriek had a low to medium acidity and very fruit-forward character, medium body, and mild funk. The raspberries and cherries are very evident in the aroma and taste, while the peach character is noticeable but more restrained. 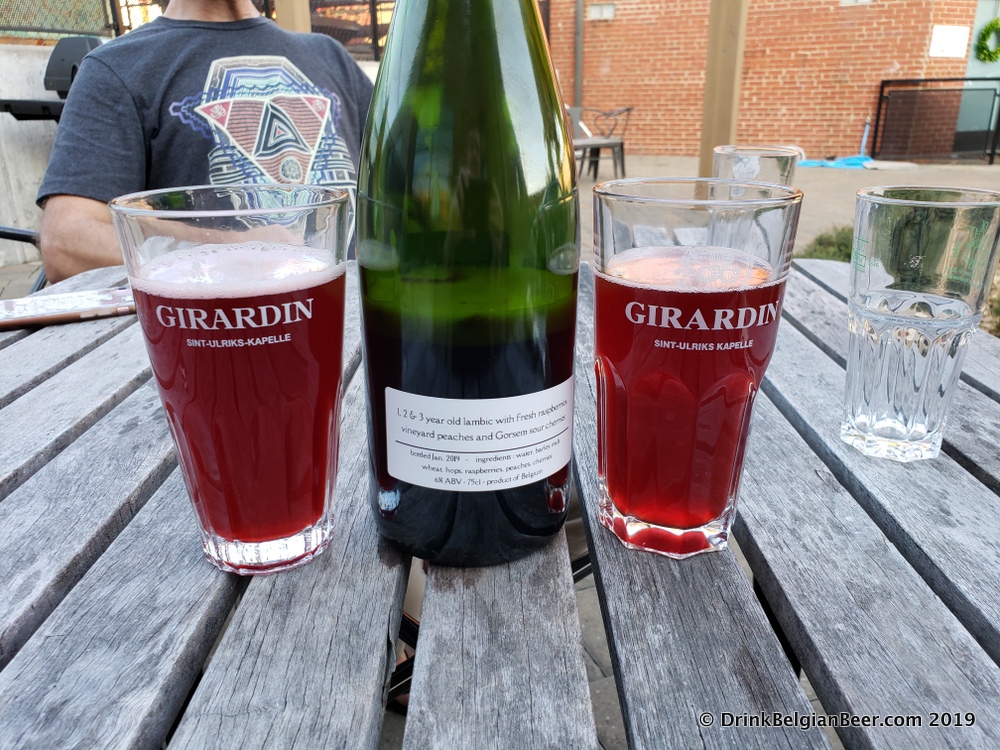 Back label of the Bokke Framboos Pjassel Kriek 2018. 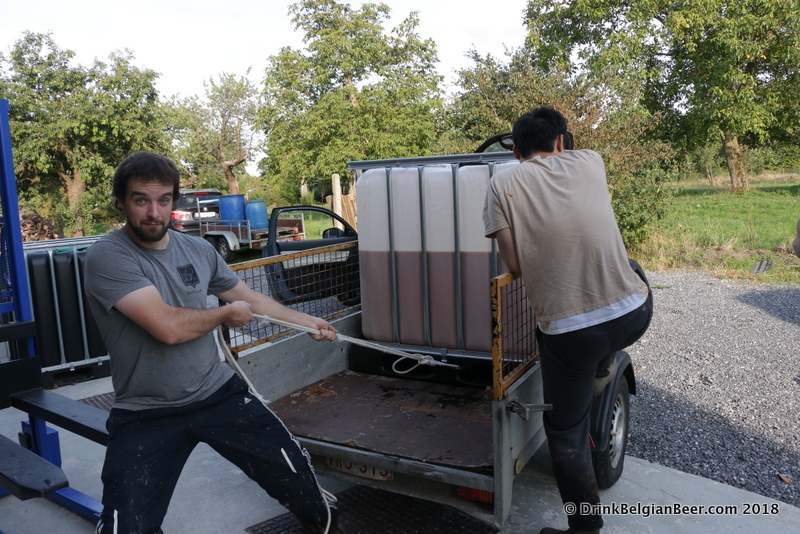 Raf has also experimented with having the the left over fruit slushes from the production of his fruited lambics distilled, in collaboration with the nearby Stokerij Vanderlinden. You can read about that process (and tasting the resulting distilled spirits!) in this previous article.

A word about Bokke availability: these beers are only available at a few very special beer bars around the world, as well as at a few beer festivals every year. While in Belgium, seek out the Bokke lambics at In de Verzekering tegen de Grote Dorst, the world-renowned lambic bar in Eizerginen, in Belgium’s lambic country. This cafe has won numerous awards, and has a very large list of vintage lambic beers, as well as local and regional beers. 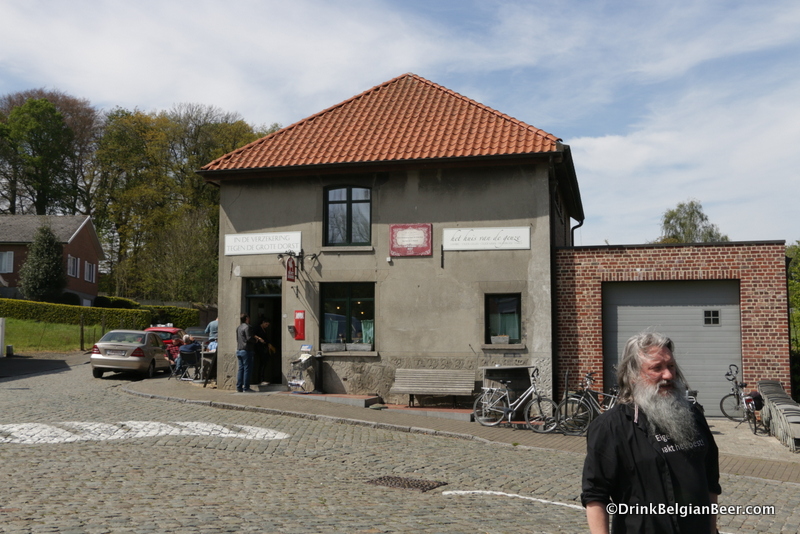 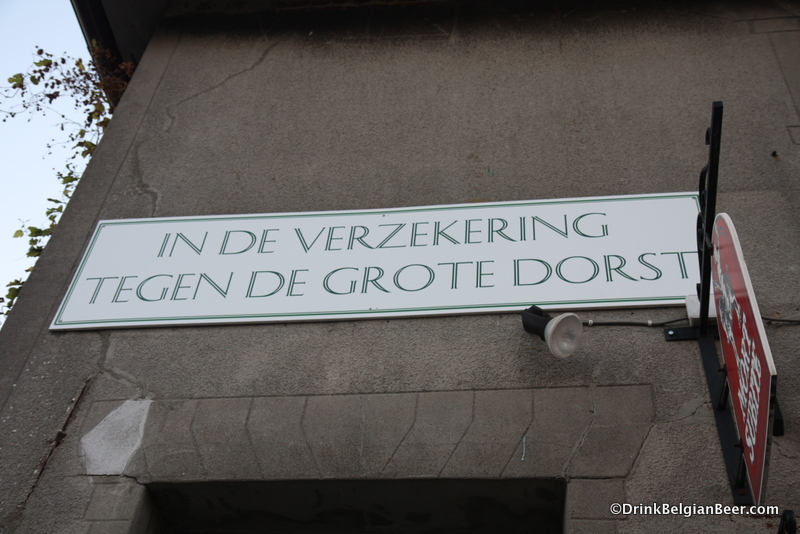 The sign above the front door lets you know that you are at In de Verzekering tegen de Grote Dorst. 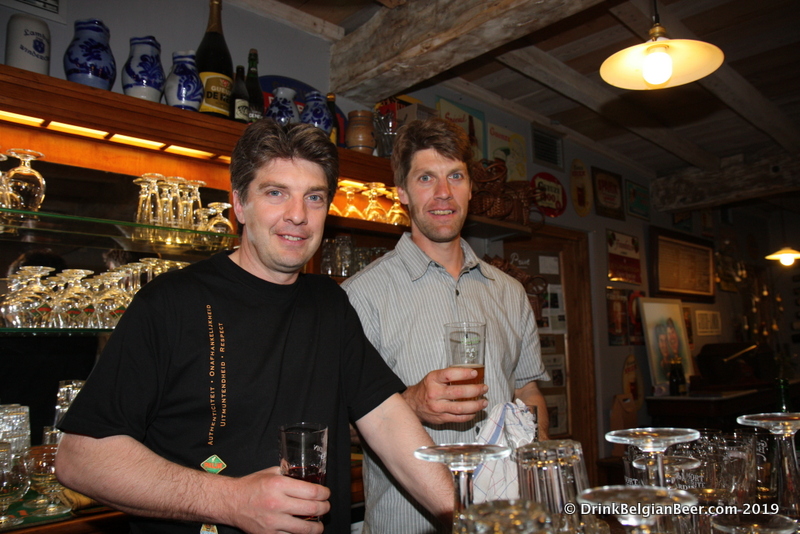 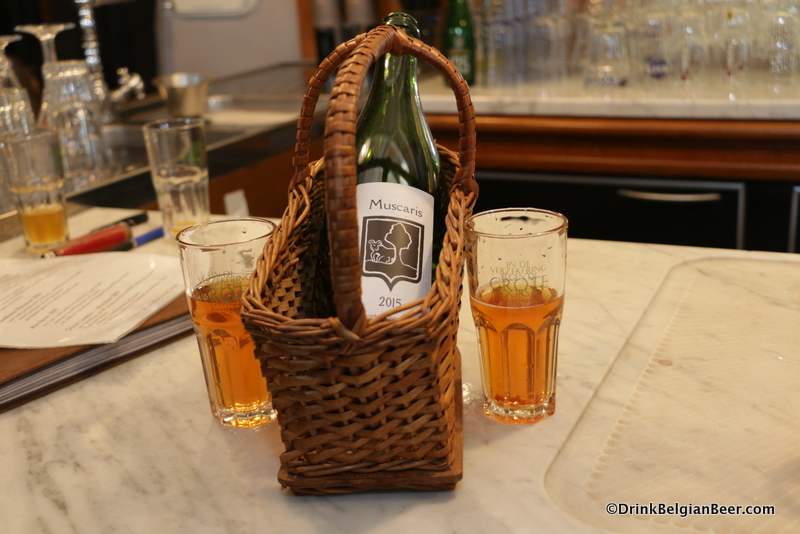 Bokke Muscaris 2015 on the bar at In de Verzekering tegen de Grote Dorst. 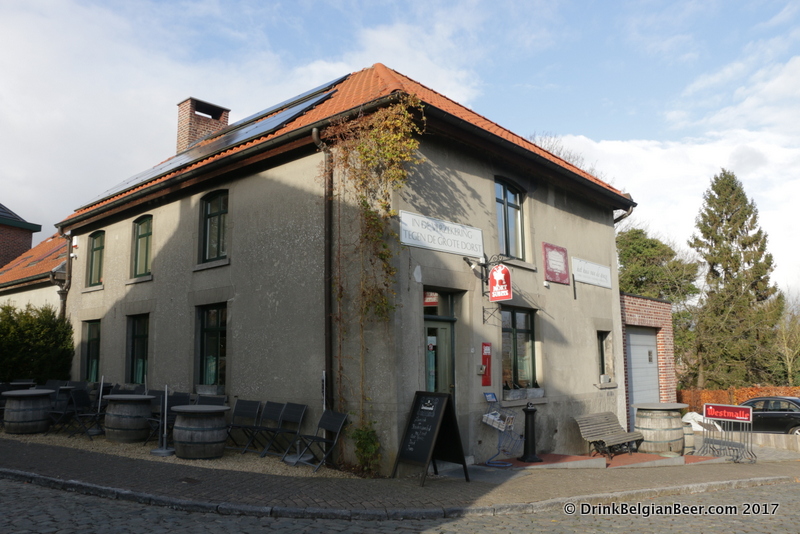 Also in Belgium, the closest venue to Bokke is “De Gebrande Winning” a cafe/restaurant in nearby St. Truiden. De Gebrande Winning had an event in early May that featured Bokke beers, and the H. Ertie lambic blends from Uli Kremer of Germany. The event, for 80+ persons, sold out in less than one second (yes, you did read that correctly.) 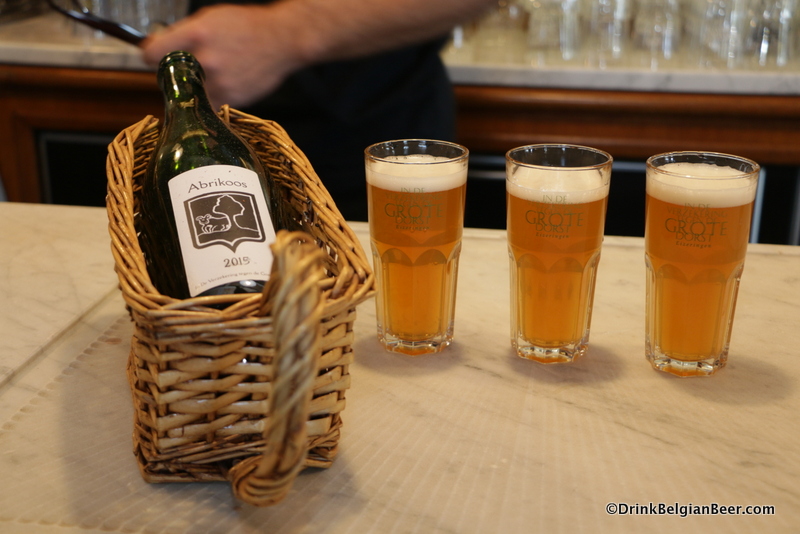 Bokke Abrikoos 2015 on the bar at In de Verzekering tegen de Grote Dorst.

If you fancy a visit to Berlin, The Muted Horn is the place to go. In fact, The Muted Horn stocks some of the most hard to find beers from Bokke, Brasserie Cantillon, and Brouwerij 3 Fonteinen, as well as many other lambic brews. 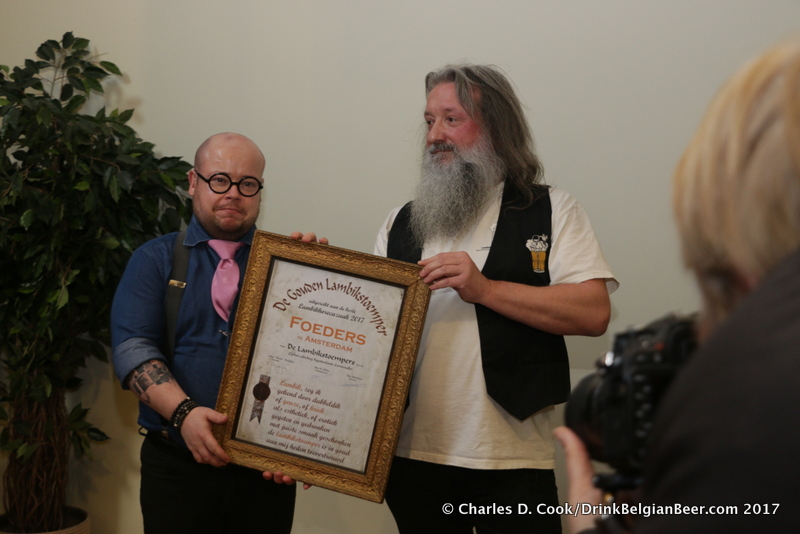 In Amsterdam, you can sometimes find Bokke brews at Foeders, a fairly new bar, opened in 2017, run by Belgium’s Yuri Hegge. Foeders easily has the top lambic beer selection in Amsterdam, and often hosts events featuring lambic brews. Owner Yuri Hegge received the Golden Lambiekstoemper award in 2017 from De Lambikstoempers, a beer promotion and appreciation club based in Halle, south of Brussels. This award is given to the top lambic establishment for the year, as determined by the members of the club.

In Scandanavia, the Bokke brews are regularly available in just a few spots. In Copenhagen, Denmark, Restaurant Barr had a number of bottles on offer, seven different, in fact, as of early August 2019. These included one specially made for them by Raf, Barrique Akevitt 2017. This is a geuze blend aged in an Aquavit barrel. The rest of Barr’s lambic list is very impressive as well.

Also in Copenhagen, Mikkeller CPH Airport, now known as one of the best airport bars in the world, sometimes has Bokke beers on offer. As well, so does Mikkeller’s Koelschip in Copenhagen. Note that one of the reasons Copenhagen gets so much attention is the Mikkeller Beer Celebration Copenhagen, typically held around the second weekend of May every year. On some odd-numbered years, the Mikkeller Beer Celebration falls on the weekend following Belgium’s Toer de Geuze, which happened in 2019. Many beer lovers seized the opportunity to take a couple of weeks off and hit two of the word’s premier beer events on consecutive weekends.

In Stockholm, Sweden, Internationella Pressklubben is the place to seek out the Bokke lambics. This venue is a restaurant, with a bar called the Duvel cafe.

Here are some upcoming events that will have Bokke lambics on offer. There will be the “Night of the Goat Thirst” at Ebenezer’s Pub in Lovell, Maine on Saturday, August 24th. Note that this is an alternate naming of the “Night of the Great Thirst” held at Ebenezer’s Pub on odd numbered years, and in Belgium on even numbered years, at the In de Verzerkering tegen de Grote Dorst cafe. Raf will be in attendance, along with Yves Panneels of In de Verzerkering tegen de Grote Dorst.

On November 23, 2019, The “WILD FESTIVAL GRONINGEN” in Groningen, The Netherlands, will offer several Bokke lambics.