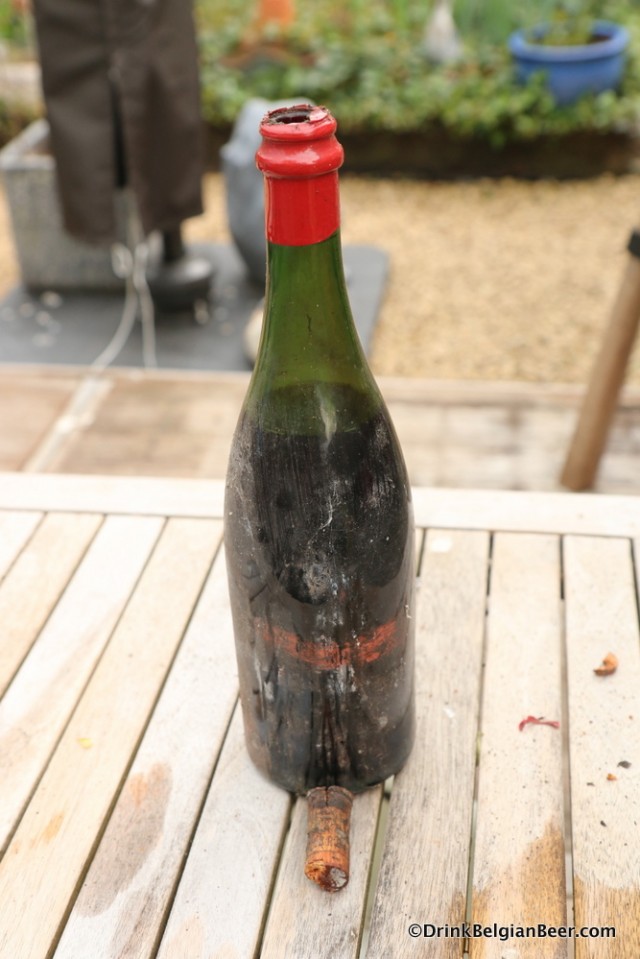 On a nice spring day in Belgium, Sunday, April 20th, I had the chance to taste a very special vintage beer. It’s not too often that you get to drink a nearly 40-year old brew, and I was excited at the news that friends Andre Van Gansen, Danny Van Tricht, and I would be opening a 1975 Kriek from Brasserie Cantillon that afternoon. 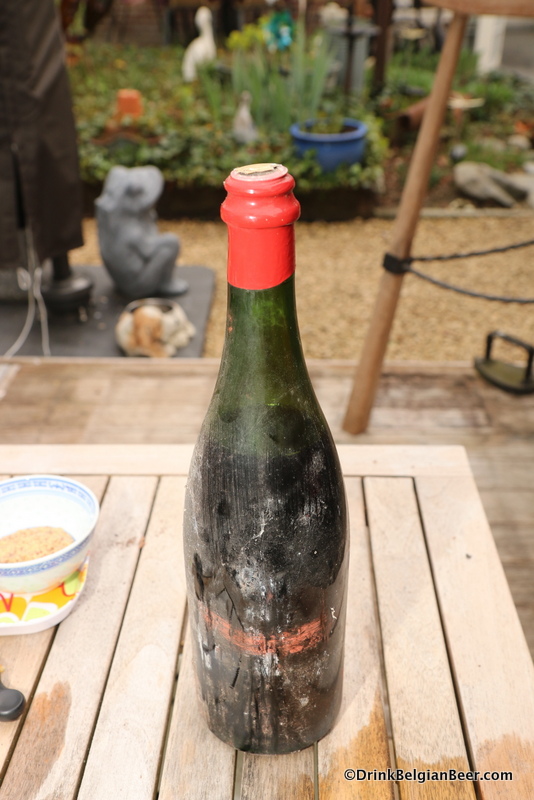 A 1975 Cantillon Kriek, just prior to being popped open. Note the red stripe, indicating it is a Kriek.

I find that beers like Oude Gueuze and Oude Kriek, along with strong, bottled conditioned brews, age best, so was really looking forward to this tasting. We had sampled a circa-1960 Cantillon Kriek a few years ago, and while the beer was still very good, the red color of the cherries was almost gone. I hoped this would not be the case with the ’75, and my wish was granted. 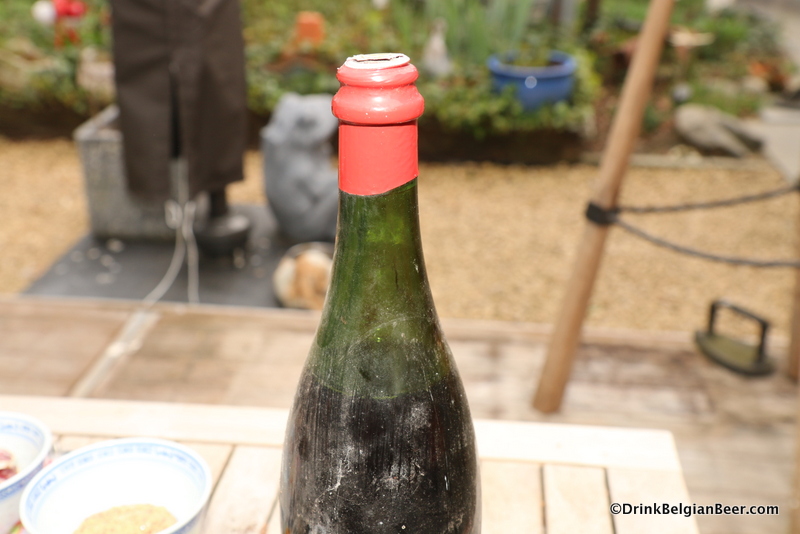 Top half of the 1975 Cantillon Kriek.

The bottle Andre brought with him appeared to be in good shape, except that a lot of evaporation had occurred in the nearly four decades since it was filled in Brussels’ Anderlecht neighborhood. A low fill level can often mean an undercarbonated beer, so we were a bit concerned. 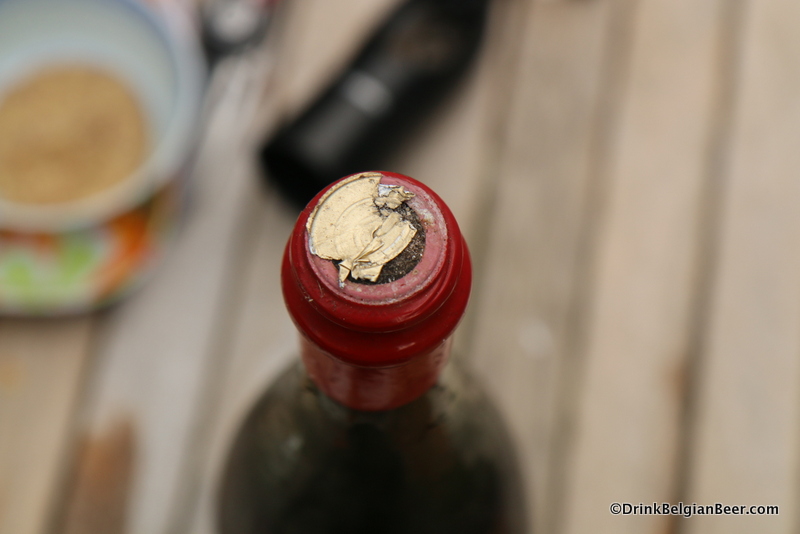 The top of the ’75 Cantillon Kriek bottle. Note the gold foil at the top

You will note, of course, that this bottle is unlabeled, as Cantillon didn’t start adding labels to their bottles till years later. You can tell it is a kriek by the red wax on the neck of the bottle, and the red stripe of paint on the side of the bottle. That’s how kriek was designated in the old days. A white (or gold) stripe would indicate the beer is a gueuze. 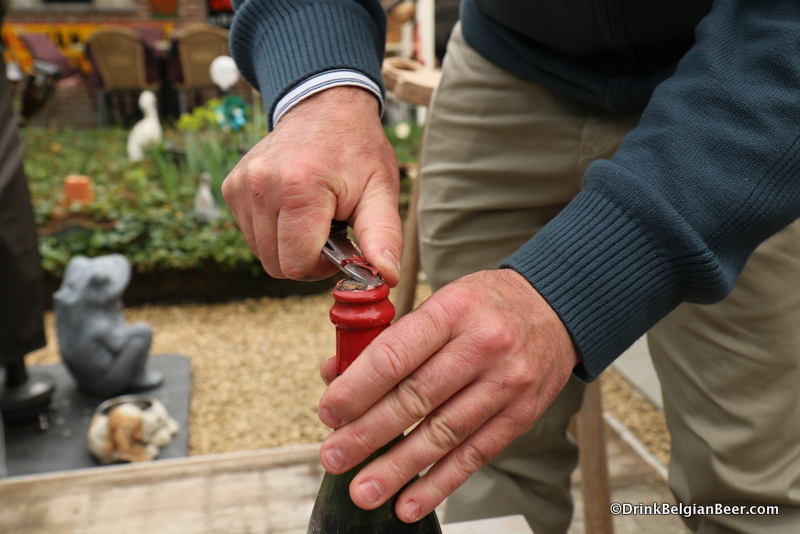 Removing the foil from the bottling opening above the cork. 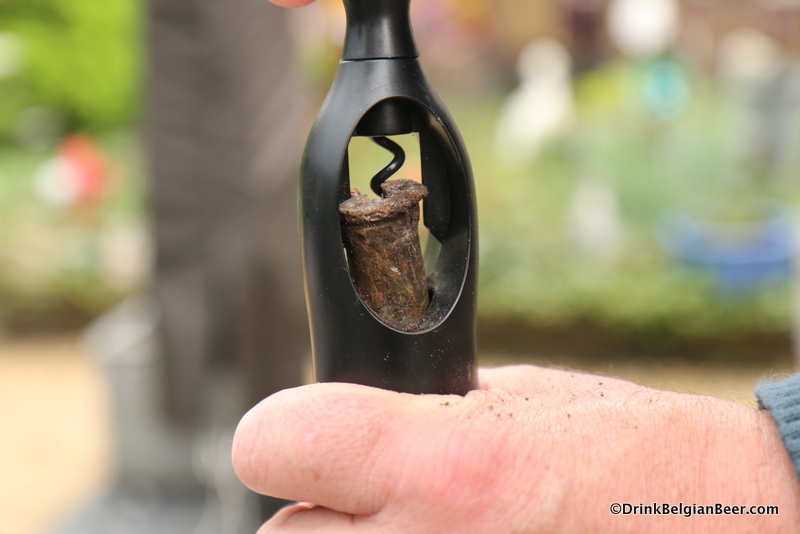 Pulling the cork from its 39 year resting place.

Andre opened the bottle, as Danny and I watched: “I have had this since 1985, in my cellar. I open a bottle only on special occasions,” Andre remarked, smiling. Curious, I asked him where he got his crate from. “From the person who bought it new,” was his sly reply. “I had to marry his daughter to get it,” he added, grinning. 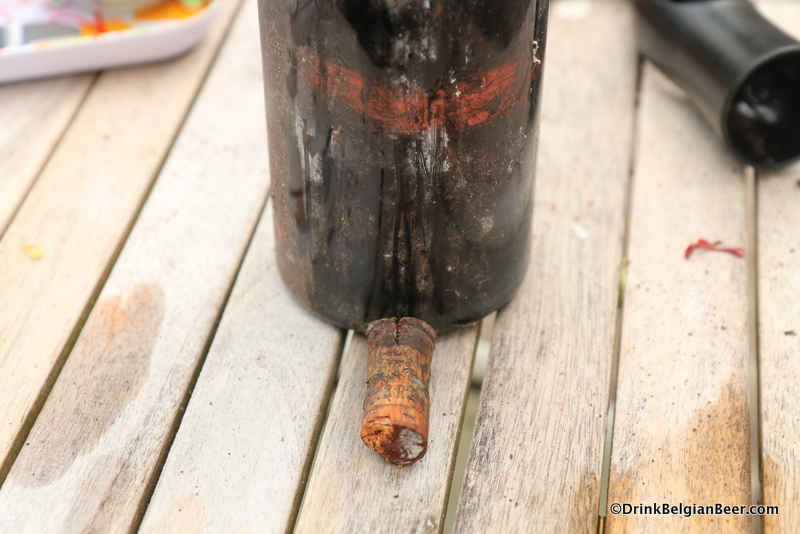 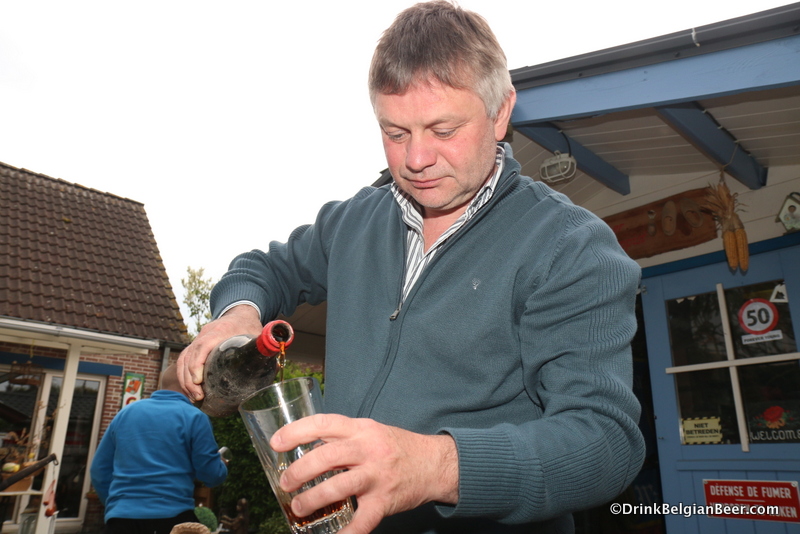 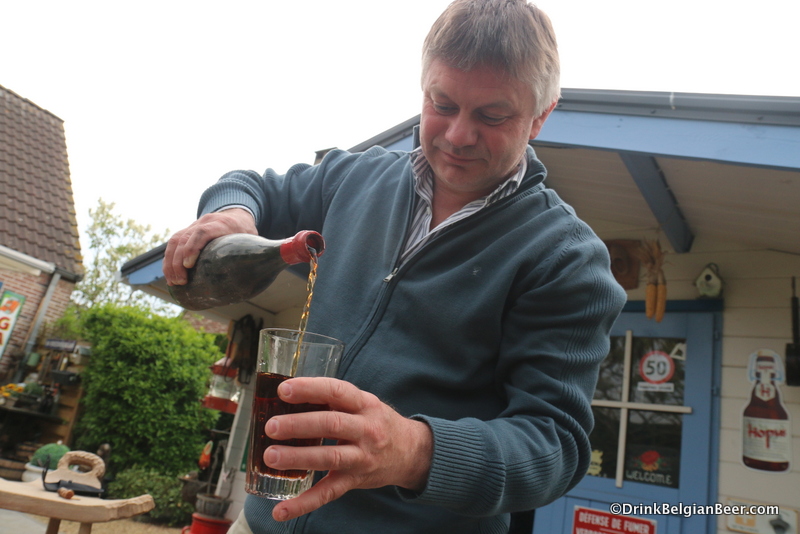 Another shot of Andre pouring the ’75 Cantillon Kriek.

So there you have it, go find a good Belgian girl to marry, and set your designs on your father-in-law’s cellar! (Of course, I’m only kidding. I’m sure Andre didn’t even know about the ’75 Cantillon Kriek-and ’75 Lindemans Oude Gueuze, when he tied the knot with his beloved, Betty.) 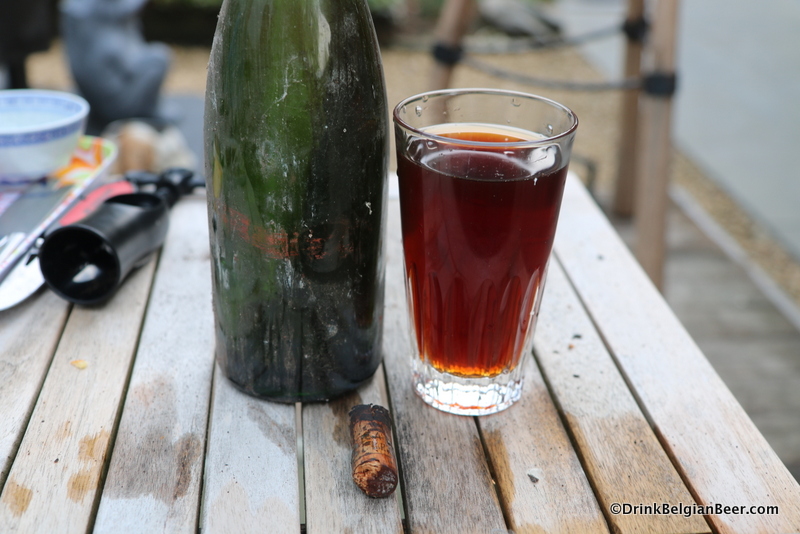 As Andre poured the Kriek into a geuze glass, we could see that there was still some carbonation there. Yeah!! What a beautiful sight.

See here for a video of Andre pouring a glass.

The kriek still retained a luscious dark-red hue color. It also still had enough carbonation to give us a fantastic tasting experience. The brew was very tart for its age, which I was not expecting, and the cherry fruit flavor was still very evident. “Really great beer, still in beautiful shape,” Danny commented, as I basked in the experience. “Yes, this bottle held up really, really well,” Andre commented, happily.

See here for another video of Andre pouring a glass. 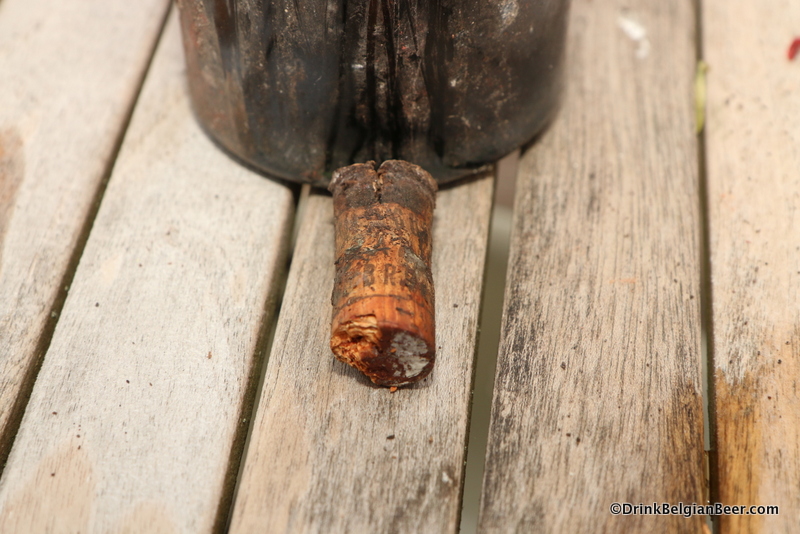 Close up of the cork.

We savored the liquid treasure for some time, and toasted Jean-Pierre Van Roy, who was the brewer when this nectar was bottled. I’m certain future drinkers will also be hoisting a toast to his son Jean Van Roy, when they drink 40-year old lambics brewed by him. Sante, Cantillon!!

See below for more photos of the 75 Cantillon Kriek. 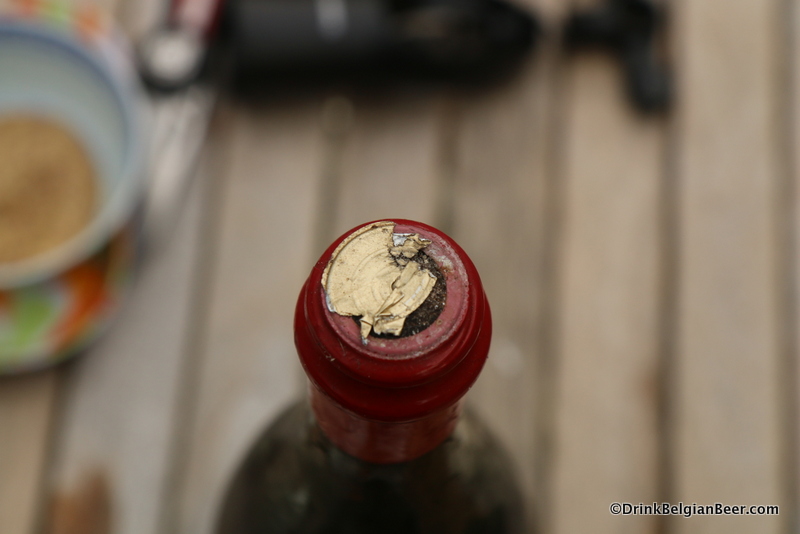 Another shot of the top of the bottle. 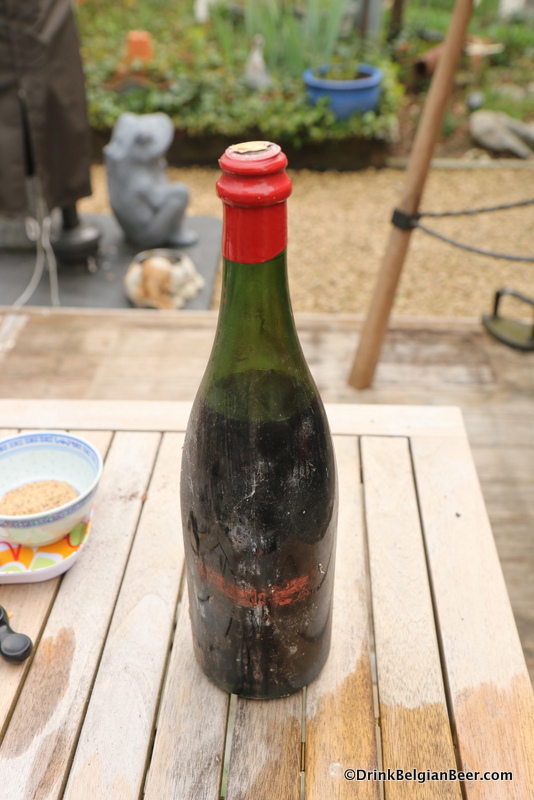 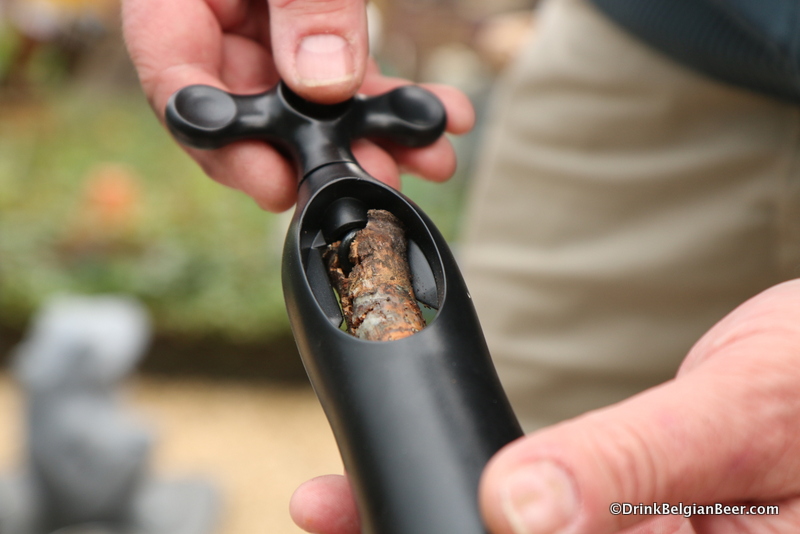 The cork, almost out! 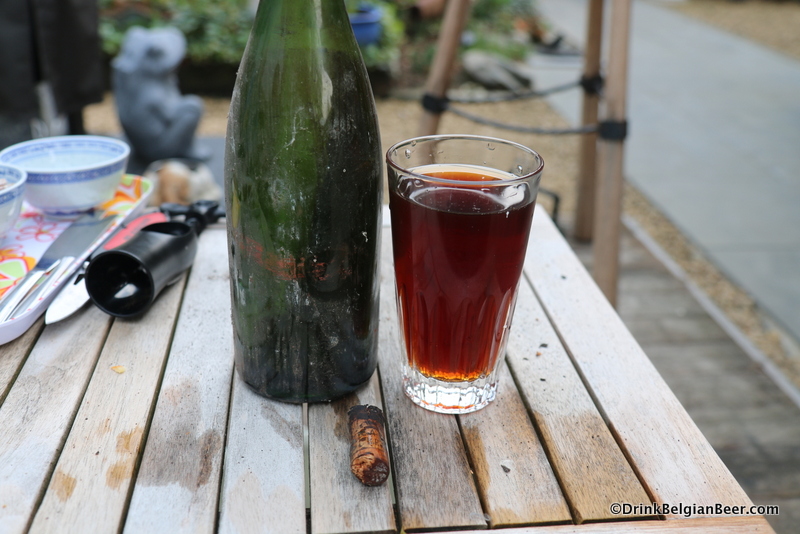 Seconds before the sampling began! 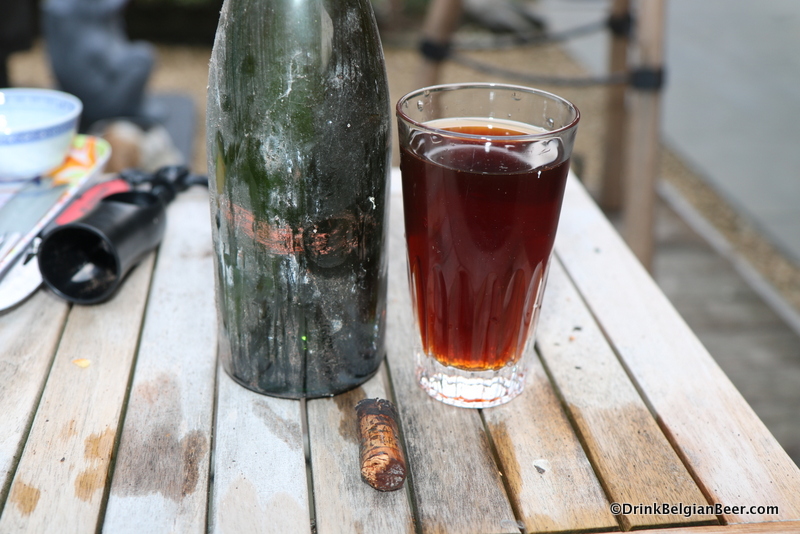 One more shot of this aged beauty….