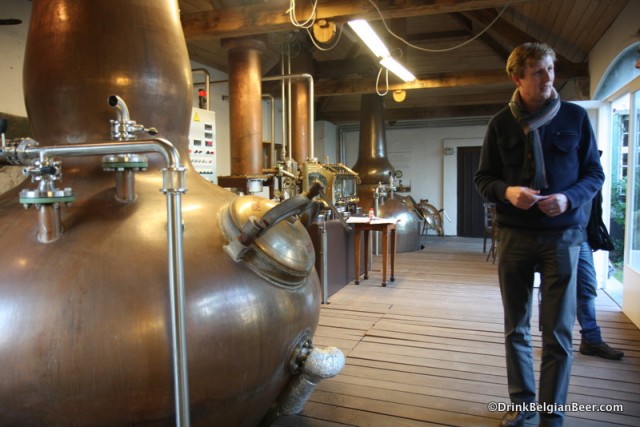 After the distilling process, the spirit is taken by truck to the brewery in Mechelen, and placed into some of the hundreds of barrels located in the main brewery building, behind bars. They aren’t taking any chances with this valuable nectar.

In the brewery, there are some barrels marked from 2008 and before, as a number of tests/trial batches were produced at another distillery prior to the distillery opening in Blaasveld in 2010. “But we always used our Gouden Carolus Tripel as the base,” Leclef stated.

Signs tell about the whisky making and maturation process in the distillery and barrel rooms. As to how his whisky is made, Leclef remarked “We only say that we use the regular way of double distillation for whisky, with a cutpoint of 68 degrees Celsius.”

As to security, the Belgian tax authorities don’t take any chances, either. Spirits are heavily taxed in Belgium, and a padlock prevents anyone from taking a taste-or tampering with the amount of liquor produced-on site in Blaasveld.

Rubens told me in early September: “We are planning a Stokerij De Molenberg Whisky pre-release public tasting in Mechelen on November 23. The details are still to be determined.”

Leclef’s family is rich in both brewing and distilling tradition, and he in fact has led a great success story. The brewery had worked closely with a brewing group outside the Van Breedam family in the 1980’s, which did not work out so well. Leclef took over the brewery in 1990, saving Het Anker from the brink of closing. At that point they were brewing less than 1,000 hl a year. Charles Leclef made Het Anker completely autonomous in 1998.

Millions of euros have been spent on the brewery, attached hotel, distillery, and a new bottling plant that was just completed in early December, a few km from the brewery. The atmospheric, beautifully decorated brewery restaurant was also renovated in 2010, and I had a great meal there during my visit in December 2012.

Het Anker really has it all. Get there!!