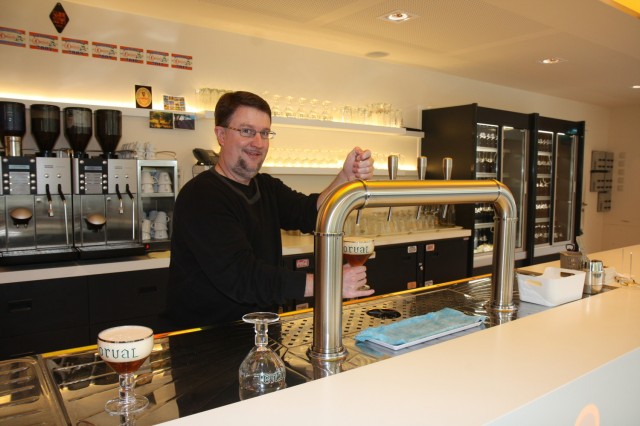 Charles D. “Chuck” Cook, also known as “The Belgian Beer Specialist” has traveled to Belgium 39 times since 1994 to explore, experience, and enjoy its incredible beer culture.

He is the primary driving force behind the content on this site.

Chuck has visited about 175 different breweries in Belgium, including multiple visits at all the Trappist Abbey breweries, and most of the other established breweries in “The Beer Country.” He has also visited about 400 beer-focused cafes and restaurants, and many of the best beer festivals in Belgium. He makes Richmond, Virginia his home.

Chuck was one of 52 International beer judges at the second edition of the “Brussels Beer Challenge” which is an International beer competition, held in Liege in November 2013. He has also appeared on Belgian TV news, and has been aired on Belgian radio. Chuck was also a guest speaker at The Smithsonian Associates in Washington, D.C. in November 2018. Additionally, he has given talks on the subject of Belgian beer at Max’s Taphouse in Baltimore, MD, and the Rock ‘n Roll Hotel in Washington, D.C.

Keeping up with Belgium’s quickly changing beer scene is no easy task, as new breweries and bars open at an ever-increasing pace. To keep up, Chuck usually makes two trips to Belgium each year, of about ten or so days each. He has logged about 50,000 high-resolution photographs during all his travels, with most from the last five years captured with a Canon digital SLR. This, in addition to hundreds of hours of audiotape with brewers, café owners, and beer lovers, gives him a nearly unparalleled amount of content from which to draw.

On this site, you will see brewery feature articles, café spotlights, and other beery news from Belgium. The site will be updated frequently, and hence beer lovers from across the globe will be tuning in often to read about news from the Belgian beer world.

Chuck will also cover Belgian beer bars and beer events in the U.S. as well as some of the best Belgian-inspired beers, in the “Beyond Belgium” section of this site.

If you’d like information about planning a trip to Belgium, he can help design a “do it yourself” tour at a reasonable rate. If you are interested in having Chuck speak at an event, or you require Belgian beer expertise, he is available for consulting work. Please feel free to contact him.

For all this and information about advertising and rates, send an email to higrav1-AT-gmail-DOT-com.